Kubo and the Two Strings celebrates the power of storytelling.

KUBO AND THE TWO STRINGS 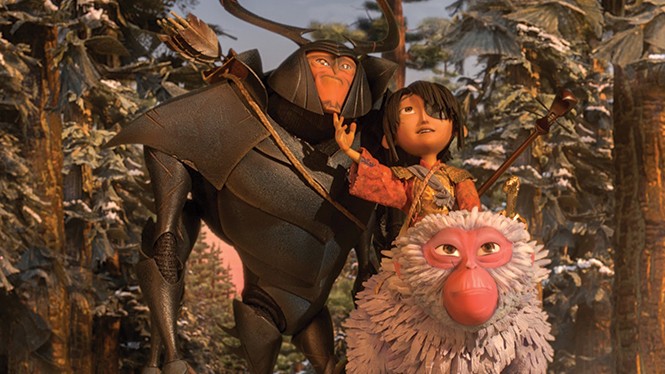 In the central plaza of a seaside Japanese village many years in the past, a young one-eyed boy named Kubo (Art Parkinson) is surrounded by an enraptured audience. Playing on his magical shamisen—a three-stringed Japanese instrument—Kubo brings to life a succession of origami figures, part of an ongoing performance about a warrior on a quest who battles frightening monsters (and perhaps also a fire-breathing chicken). It's an archetypal tale, nested inside another archetypal tale, a hero journey about bravery and the connections of family. Kubo isn't just telling a story; he's telling the story.

The setting, both geographical and temporal, is in many ways incidental to Kubo and the Two Strings—the latest terrific feature from stop-motion animation studio Laika (Coraline)—although there's a delightful specificity to this village and its inhabitants. Because like all of the greatest stories, this one is about something bigger and more broadly human than its surface narrative. This is movie-making of the most magical kind—not just an astonishing feat of visual imagination, but a resonant celebration of what stories themselves give to us.

Kubo's own quest involves many of the elements that are so familiar from the culture-spanning monomyth. Mystery and magic surrounds his parentage, as a prologue shows his sorceress mother bringing him across the sea to safety as an infant after the death of his father. Years later, his mother now mostly invalid and only sporadically lucid, Kubo finds himself again threatened by the same powers that stole his eye—his mother's witchy sisters (Rooney Mara) and his own grandfather, the Moon King. Only three enchanted objects can protect him, and Kubo must set out to acquire them, accompanied only by the animated totem of a monkey (Charlize Theron) and a samurai who has been transformed into a man-sized beetle (Matthew McConaughey) and whose only vague human memories are of serving Kubo's father.

If Kubo had been nothing more than its unique style, it still would have been one of the year's most remarkable films—not animated films, but films, period. Director Travis Knight—a Laika veteran animator with his first directing credit—oversees a production that features characters designed with a distinctive sharpness. The action sequences are magnificently choreographed, highlighted by a battle between our three protagonists and a massive creature made of bones, and a confrontation between Monkey and one of the evil sisters on a sinking ship built out of leaves. The comic relief, when it comes, is low-key and anchored in the characters. And individual shots are breathtakingly beautiful, none more so than a river covered in slowly moving lanterns, floating into the glowing sunset.

The heart of Kubo, however, is in the skill with which its screenplay (by Marc Haimes and Chris Butler) allows us to invest in this specific story while building its thematic framework on a foundation much more expansive than this specific story. It explores our need to reach out to the generations that came before us for wisdom and guidance, and the way that myths and legends serve that need. It touches on the power of humanity as something based on recognizing what pulls us together, and makes us want to fight for one another. It recognizes art—music, a paper figure, a tale of a long-ago warrior—as some of the most potent magic we have for defeating heartlessness and despair.

If the description of a shamisen as a three-stringed instrument seems confusing in light of the film's title, rest assured that Kubo and the Two Strings handles that issue in a manner that's almost unbearably heartbreaking. Like much of the rest of the story, it's built on allegory and metaphor, but never in a way that feels like an academic lesson. In a landscape of animated films that rarely reach for more than franchise-building, wacky hijinks and pop-culture punch lines, this one has been crafted with soaring ambition. What better lesson to convey to children through a cinematic story than why we continue to tell stories at all, how transcendent they can be and how they allow us to share our attempts to understand the experiences—and people—that made us who we are.