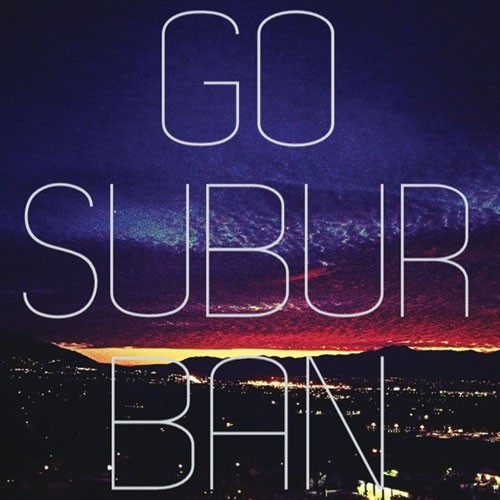 If Go Suburban is what the Sandy quartet of the same name created on the first try—well before their first-year mark—this band is definitely one to watch. Combining elements of indie rock and alt country, Go Suburban’s sound is refreshingly difficult to label. On the polished five-track EP—recorded at Provo’s venerable June Audio—snappy pop drum lines share space with twangy, bread & butter guitar, both of which lay the foundation for Brian Swanson’s stunner of a voice that dips and soars as freely as the lap steel in a country song. The vocal harmonies are flawless throughout the album, but they’re especially lovely on opening track “Mountain of Hope.” The driving percussion on album highlight “Let Me Go (The Kids Don’t Know)” showcases Go Suburban’s knack for building anticipation and propelling a song toward a goose-bumps-inducing climax. The infectious hope and carefree energy of “Going Home” is encapsulated in the lyrics: “Let it ring in every ear/ send the message loud and clear/ we’re going home.”
Self-released, Jan. 7; Facebook.com/GoSuburban

What’s cool about The Lazy Waves is that they are literally impossible to categorize, and nowhere is that more apparent than in the jump from the versatile trio’s Western-themed Spring Break EP (2013) to their latest, Wavetable. Daniel Fischer (Rotten Musicians, Fisch Loops) and Michael Gross and Matt Glass (Michael Gross & the Statuettes) traded Ennio Morricone-style twang for ’80s-pop synths, but kept the orchestral elements and twinkling piano and let it all loose in a disco club. The four tracks kick off with “Tonight (Get on the Streets),” an infectiously catchy dance-party anthem built on a foundation of piano and strings and overlaid with a killer beat and an array of glowing laser sounds. The lushly layered “T.L.I.H.T.F.” (“True Love Is Hard to Find”) takes on an island feel, with lap steel meandering among smooth pop vocals and more beat-driven electro. If there were a genre for The Lazy Waves, it would have to be some kind of super-genre that’s a somehow still-beautiful melding of all other genres.
Self-released, Feb. 18; TheLazyWaves.bandcamp.com

The latest release from Americana/folk-rock quartet Echodog shines with deliberately penned lyrics, detailed imagery and warm, woodsy instrumentation. And the emotional subject matter found in the seemingly sunny-sounding tunes gives the five-track EP a weight that’s surprising, considering its often breezy, porch-stomping feel. Once lead singer/songwriter Dan Jackson puts more guts behind his vocals, Echodog will have all the necessary elements in place. Meanwhile, Jackson’s clever turns of phrase—as well as the reverb-heavy Western-style guitar and solid backing harmonies—prove that the band has major potential. Mine begins with “Mine,” a country number about leaving the dead-end coal life, then moves into the haunting, harmonica-rich “Ghost,” which features my favorite line on the album: “I’m cut to the bone/ I’ve been drained to the dregs.” The guitar takes on a spooky desert-noir quality on “Lucy,” with a darkness that’s reminiscent of early Murder by Death. Mine concludes with the powerful narrative of “The Runaway,” about an unnamed man abandoning his family and heading out to sea—and subsequently meeting his doom.
Self-released, Feb. 22; Facebook.com/EchodogMusic