Alien: Covenant can't decide whether to get philosophical or homicidal. 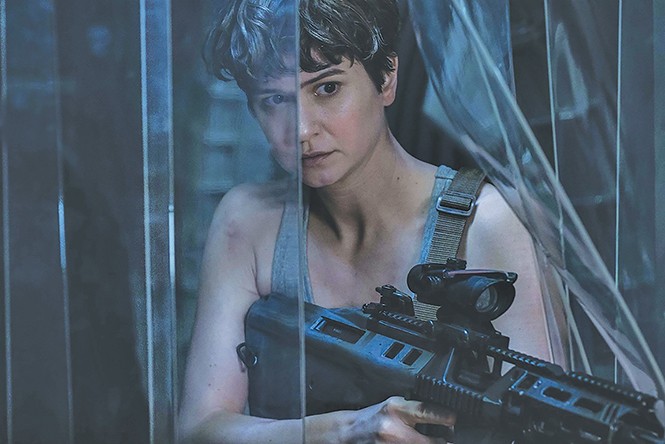 If you find yourself befuddled by what the Alien movie franchise has become, the line forms behind me. What began nearly 40 years ago as a creepy extraterrestrial slasher movie with a memorable tag-line ("In space, no one can hear you scream") and an even more memorable double-jawed, acid-blooded antagonist kept finding new incarnations in subsequent installments. James Cameron turned it into the shoot-'em-up action of Aliens, Joss Whedon wrote a weird farewell to Sigourney Weaver's Ripley in Alien Resurrection, and the whole thing degenerated into unapologetic genre cash-grab with two Alien vs. Predator movies. By the time 2012's Prometheus rolled around—which played coy at the outset as to whether it existed in that same universe—it was worth asking whether being part of the Alien franchise told an audience anything any more about what they could expect. O Xenomorph, where art thou?

Alien: Covenant finds director Ridley Scott returning to many of the Big Ideas that were swirling around in Prometheus, but it grows increasingly confusing as to why he's packaging those ideas in this particular cinematic world. While this might in many ways be more instantly recognizable as an Alien movie than Prometheus was, its themes clang against the delivery system so discordantly that it can be heard even in the vacuum of space.

Set in 2105, Covenant serves as more or less a direct 10-years-later follow-up to Prometheus, beginning with a vessel on a multi-year journey to colonize a distant planet. But, in the fine tradition of the original Alien, the crew of the Covenant is awakened early to deal with a crisis, and then they discover a previously unknown planet with an Earth-like atmosphere nearby. When they investigate, they find ... well, let's just say that it doesn't take long before things are bursting out of people in particularly vivid ways.

It should come as no spoiler that these events are linked to the fate of the ship seen heading off into the unknown at the end of Prometheus. A prologue reunites the "synthetic" David (Michael Fassbender) with his inventor, Peter Weyland (Guy Pearce), discussing creators and their creations many years before the Prometheus events. Indeed, Covenant continues the existential musings of Prometheus, delving into the impulse to be godlike both through creation and destruction. Even the title of this new film hints at the theological shift from Prometheus, turning the ship into a kind of Noah's Ark with paired-off crew members, and addressing the co-existing responsibilities of creator and created: What do we owe to God, and what does God owe to us?

That's heady material. But the script—credited to veteran John Logan and first-time screenwriter Dante Harper—doesn't feel nearly as serious as Prometheus did. Indeed, of all the post-1979 Alien installments, this feels like the one most determined to mimic its formula even beyond the premature awakening of the crew: landing party, face-huggers, questions of quarantine procedure, tough female protagonist (Katherine Waterston as second-in-command Daniels), ineffectual captain (Billy Crudup) and an enigmatic android (Fassbender turning in a typically superb performance). Scott gets creatively grotesque as his various aliens emerge, showing genuinely terrified people trying to comprehend the horror of their situation.

Then, for the finale, Scott shifts hard toward Aliens, as two solid action sequences find Daniels and the Covenant's pilot (Danny McBride) fighting off a Xenomorph, including using a big mechanical claw. If there was some uneasiness about Prometheus feeling at all like the Alien movies people loved first and best, there's no such confusion here.

Instead, the confusion rests in why the Big Ideas are jammed uncomfortably into this movie. It feels almost like a trick—an attempt by Scott to reflect on mortality and hubris but sneak it past an audience by wrapping it in a familiar franchise package. Ambitious though it may be, the elements never pull together in Covenant, leaving only reminders that the original served up its own fascinating ideas—about dehumanization and domination—without ever underlining them. Like the monster at its center, this franchise keeps changing shape, but like most mutations, that doesn't mean it's an improvement.