Richard Linklater affectionately skewers young dude-hood in Everybody Wants Some!! 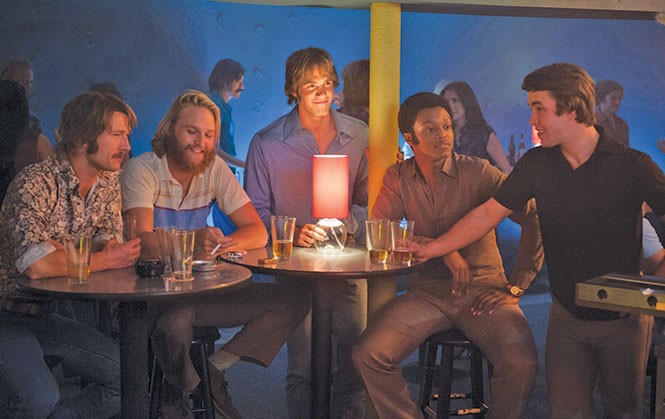 It may not seem like a particularly difficult thing to make a movie about young, American, mostly white guys. Certainly multiplexes are filled with movies made mostly for young, American, mostly white guys, so you'd think that the film industry would have a pretty solid handle on who they are. But there's a catch: How do you acknowledge the reality of often insufferable dude-hood without making the experience of watching them equally insufferable?

For more than 25 years, Richard Linklater has shown a unique gift for telling stories about brash, secretly insecure, yet pretending-their-every-utterance-is-brilliant young guys—from Slacker to Dazed and Confused, from Before Sunrise to Waking Life. Even his protagonist in Boyhood eventually became one of these fellows. And Linklater has always managed to show compassion for their immature bravado, even as he lets them talk their way into seeming fairly ridiculous.

Everybody Wants Some!! lets a lot of guys do a lot of talking, and it's a pretty delightful experience watching them do it. Set over the course of four days in August 1980, it begins with the arrival of freshman Jake (Blake Jenner) on the campus of fictional Southeast Texas University just before the start of the school year. A pitcher on the baseball team, Jake moves into one of the houses occupied solely by the players, and meets his new teammates, including wisdom-spouting Finnegan (Glen Powell), cocky pro prospect McReynolds (Tyler Hoechlin), hyper-intense transfer pitcher Jay (Juston Street) and fellow freshman Plummer (Temple Baker).

On its most basic level, this is a "hang-out movie" in the spirit of Dazed and Confused, finding most of its charm and humor in the characters' episodic adventures and youthful ramblings. The cast of mostly unfamiliar faces is almost uniformly terrific, allowing Linklater simply to let their interactions—whether getting high together, picking up women or practicing on the baseball diamond—reveal their quirks and foibles.

Linklater also bathes Everybody Wants Some!! in its period setting, taking particular advantage of the funky musical crossroads that was 1980. At the ass-end of the disco era, Jake and his buddies head out for a little polyester-clad dancing; during the birth of Urban Cowboy Western bar boom, they line-dance and ride mechanical bulls; they collide in a mosh pit to a punk rendition of the Gilligan's Island theme; riding around in Finnegan's car, they sing along to every word of The Sugar Hill Gang's "Rapper's Delight."

While the soundtrack is certainly bound to have a nostalgic appeal to Gen X-ers, the reason for setting the story in this particular year feels like more than cynical calculation. Everybody Wants Some!! sets up its characters as little more than the raw material for potential adult lives, with everyone trying on different personalities and roles to see what fits. Jake can be the guy trying to hook up for a one-night stand at a party, but he can also be the guy who connects more deeply with a freshman named Beverly (Zoey Deutch) in a way that might surprise even himself. "It's not phony," Finnegan says at one point when his teammates razz him for spouting astrology jargon as a means to pick up a woman; "it's adaptive." Linklater uses not just a time of life, but a historical time before pop-culture narrowcasting, when any number of adaptations seemed like possibilities.

Of course, those are all possibilities for a bunch of (mostly) white, (mostly) middle-class guys in the privileged campus position of athletes on the school's only winning team, so it would be easy to view Linklater as too indulgent of his characters' laddish behavior. But the decision to focus on a group of college jocks feels as deliberate as the time frame, capturing the most bro-ish of bros in the wild. Everybody Wants Some!! acknowledges, as Jake notes at one point amidst the seemingly infinite games between the players, that "everything around here is a competition"—and that competition sits at the heart of so much young male dysfunction and insecurity. The perpetual battle to be the alpha dog among other alpha dogs can be both funny and sad, and it's one of Linklater's unique gifts as a filmmaker that he can serve up the ideal balance between the two.