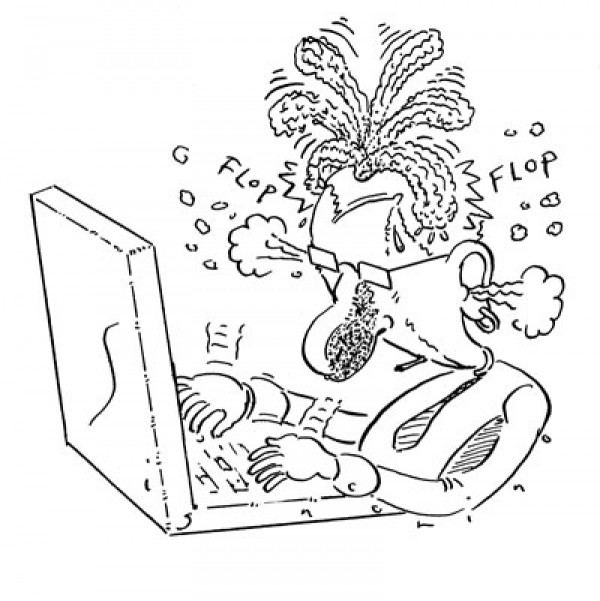 All your organs burn calories when they do their stuff, right? Well, since the brain is an organ, does thinking burn calories, and will thinking harder burn more calories? —Xandria

You know in the cartoons when a guy thinks so hard steam comes out his ears? OK, that’s a slight exaggeration, but churning of a serious nature does go on up there when you’re putting forth mental effort. The brain burns plenty of calories when at rest, and from outward signs you could easily believe concentrating causes energy use to spike. The reality, however, is more complex, and arguably more interesting.

Your brain accounts for only 2 percent of your body weight but consumes roughly 20 percent of your calorie intake. The percentage is even higher in kids, whose brains are still developing. The average newborn’s brain uses close to 75 percent of available energy, and an 11-year-old’s still burns through a third. For an adult, that translates into something like 20 watts.

About 60 to 80 percent of the brain’s energy is used for “neural signaling”—thinking, as the common folk call it—with the remainder devoted to repair and replenishment. Like other bodily tissue, the brain burns glucose for fuel, which means combining it with oxygen. Glucose and oxygen are carried by the blood, so during times of strenuous mental activity you’d expect a boost in cerebral blood flow plus an increase in glucose and oxygen use, reflecting greater energy consumption. And for a long time that’s what scientists figured was happening:

In 1878, an Italian scientist working with a patient with a hole in his skull found the brain pulsated faster when the fellow solved arithmetic problems.

When volunteers participated in a card-sorting test for a 1995 study, their brain blood flow and glucose use both increased 12 percent.

A 1987 study asking volunteers to daydream in detail about taking a walk found their overall brain metabolism increased by 10 percent.

A 1992 study of Tetris players found that over the course of playing the game five days a week for one or two months, their brain glucose consumption declined significantly, suggesting their thinking had become more efficient with practice.

However, on closer examination, things aren’t so simple. For example, in that card-sorting test, while brain blood flow and glucose went up, oxygen use didn’t, meaning there was no increase in combustion—the brain wasn’t burning appreciably more fuel. Exactly what it is doing neuroscientists are still trying to figure out. Brain blood flow doesn’t increase fast enough to provide an instant energy boost; researchers now guess the blood rate ratchets up to cool the brain or carry away waste products. Glucose breakdown increases, but without combustion (oxidation) the energy surge is modest, maybe less than 1 percent.

Nonetheless, the fact remains: The brain consumes a disproportionate share of energy, most of which goes into thinking. That being the case, some brain scientists say we need to take a different view of what goes on up there. The old notion was that the brain was essentially passive, reacting to external stimuli. Now that we realize external events don’t change cerebral energy use that much, a different picture is emerging: Most of our mental activity is strictly internal.

Duh, you say. Now, now. Neurologist Marcus Raichle, writing in the journal Science, calls the brain “a Bayesian inference engine, designed to generate predictions about the future.” Another way of putting it is that the brain is the repository of the self, the construct of memories, conclusions and desires that constitute our personalities. All that energy goes to feed the crew of pipe-smoking dwarves between our ears who rummage through the accumulated input of our senses, ponder its significance and plot our next move.

And those dwarves go about it in a remarkably efficient way. The human brain has about 86 billion neurons packed into the same volume as a grapefruit. (Gorilla and orangutans, our closest primate competitors brain-sizewise, each have about 33 billion neurons.) The most powerful electronic brain in the world is currently the Titan supercomputer at Oak Ridge National Laboratory in Tennessee, which can perform 17.6 quadrillion floating-point operations per second, or 17.6 petaflops. With the caveat that minds and computers aren’t strictly comparable, it’s been estimated the computing power of the human brain is 1 exaflop, or 57 times greater.

Sure, in terms of sheer processing power, machines will undoubtedly overtake humans, some say within the decade. But let’s put that in perspective. Remember, the adult brain uses about 20 watts, meaning its productivity is about 50 petaflops per watt. The output of a typical supercomputer is just under 2.5 gigaflops per watt. That’s 1/20 millionth the efficiency of the brain. To put that in terms a little easier to grasp, the Titan supercomputer is a liquid-cooled 8.2-megawatt monster filling a building the size of a large suburban house. The more powerful human model fits under a hat.

Send questions to Cecil via straightdope.com or write him c/o Chicago Reader, 350 N. Orleans, Chicago 60654. Subscribe to the Straight Dope podcast at the iTunes Store.