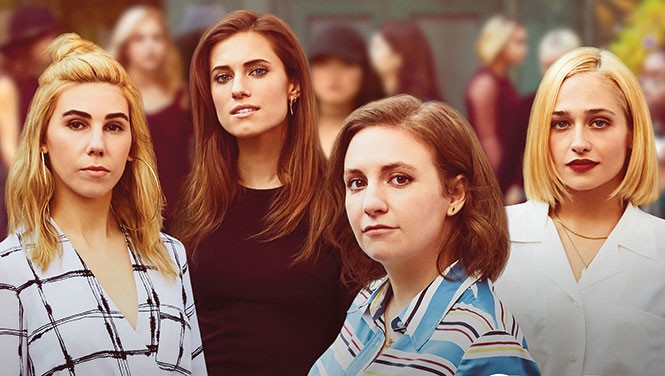 Girls
Sunday, Feb. 12 (HBO)
Season Premiere: Yes, Girls creator/star Lena Dunham has made some astoundingly stupid statements on social media—isn't that what it's for?—but she's also cranked out a half-dozen solid seasons of an HBO series, so she's far more than just a "privileged snowflake." Season 6 is the last for Girls (though there might be a follow-up movie), and Brooklynites Hannah (Dunham), Marnie (Allison Williams), Shosanna (Zosia Mamet) and Jessa (Jemima Kirke) are totally different, and somehow exactly the same, as they were in the beginning. Girls' infamously un-glam sex scenes and monologues continue, but it's Dunham's nimble comedy writing that deserves the attention—lines like "I don't give a shit about anything, yet I simultaneously have opinions about everything" are as funny as they are instantly relatable (to some of us writers, anyway).

Eagles of Death Metal: Nos Amis
Monday, Feb. 13 (HBO)
Documentary: California party-rockers Eagles of Death Metal were a cult band prior to the November 2015 terrorist attack at a Paris concert that claimed 130 lives—now, they're a slightly more notorious cult band who, surprisingly, still haven't been sued by Don Henley of the Eagles proper. Eagles of Death Metal: Nos Amis (Our Friends) isn't just about the Bataclan Theatre incident and the band's subsequent return to play for Paris fans; it also explores the decades-long, yin-yang friendship between EODM founders Jesse Hughes and Josh Homme (of Queens of the Stone Age). It's a sweet, and sometimes harrowing, story with a triumphant conclusion. If Nos Amis inspires some more sales of Eagles of Death Metal's four excellent, ramshackle rock 'n' roll records, even better.

Humans
Monday, Feb. 13 (AMC)
Season Premiere: Before HBO's Westworld, AMC's Humans was delving into lifelike-androids-among-us drama in a more understated manner (four whole episodes passed in Season 1 before someone had sex with a robot). Busy London couple Joe and Laura (Tom Goodman-Hill and Katherine Parkinson) bought a refurbished "Synth" (a human-like robot servant, Mia, coolly/creepily played by Gemma Chan) who displayed flashes of organic emotion and passive-aggressive tendencies (never, ever buy "refurbished"—eBay 101). What could go wrong? Everything, of course, and now Mia and her like-minded "family" of Synths are loose in the populace with the "consciousness code" (a backdoor switch that could make all Synths "wake up" and toss off their servitude). It's going to be a looong time before Westworld returns—get some Humans in your life.

You Me Her
Tuesday, Feb. 14 (Audience/DirecTV)
Season Premiere: Last year's surprise polyamory rom-com(!) played wacky-to-serious-and-back-again high jinx out over 10 near-perfect episodes that rung comically real. Then, You Me Her was about an unexpected love triangle between bored Portland couple Jack (Greg Poehler) and Emma (Rachel Blanchard), and free-spirited escort Izzy (Priscilla Faia), and their anxiety over hiding this new relationship, whatever it was, from their friends and family. Now, in Season 2, it's about going public and, perhaps even harder, dealing with Izzy as a full-time housemate. The only predictable aspect of You Me Her is that the guy is going to screw things up, and inadvertent third wheel Jack is right on schedule. Happy Valentine's Day!

Doubt
Wednesday, Feb. 15 (CBS)
Series Debut: TV's latest attempt to make Katherine Heigl a thing is yet another pretty lawyers show—but with a twist! Attorney Sadie Ellis (Heigl) falls in lust/love with her client, a charismatic doctor (Steven Pasquale) accused of murdering his girlfriend years ago. Did he do it? Can she trust him? Will CBS somehow drag 13 episodes out of this? Meanwhile, the rest of her law firm (which includes Dulé Hill, Elliott Gould, Dreama Walker and Laverne Cox) are ... around. Doubt has all of the sexy banter, perfect hair and designer clothes required of modern legal soaps, but it's all as empty as a showroom briefcase. Quit dicking around and just get Heigl a Fox comedy (à la The Mick) or somehow back on Grey's Anatomy, Hollywood.