Too bad smartphones weren't around a few decades ago 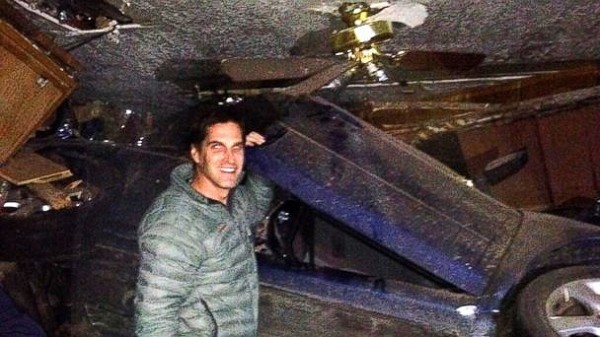 It’s just my luck to be an old fogey in the dawn of the social-media age. I have a smartphone. But I don’t go to places from which I can constantly capture the captivating moments—good or bad—that I can immediately send to Flickr, Facebook or Instagram (yeah, yeah, I know; they are becoming passé in favor of Vine and Snapchat, but I’m part Neanderthal) in order to inform my friends, followers and likers of something so profound that it would make them like me even more. Oooohhhh—99 likes! A new record!!

I no longer sit in bars until closing time, I don’t go to costume parties and I seldom drive at night. So, my posts to social media usually fall in the less-daring category of “food I am about to eat,” which is barely a notch above “adorable pets.” I occasionally share something that someone else has posted. Here and there, I post a cool news story or a nostalgic song, or I update my status signaling that I’m in some distant hotel.

As an aside, it isn’t smart to let everyone on Facebook know you are out of town, so I only do that after I’ve returned to town. So far, not a single burglary has happened, presumably because burglars are my friends on Facebook. They know I’m here, not there. It wouldn’t surprise me if someday Google or Facebook or Amazon writes the algorithm that predicts where I will go and when, making my current scheme obsolete.

All that as it may be, I’m feeling slightly down because I never had a smartphone in the 1970s and 1980s, when I really needed one. Man, oh man, the pictures I could have shared. Let’s just say this—there’d be a couple fewer politicians and bishops walking around today if I had posted for time and eternity some of the shenanigans we were all up to back then—girls included.

It’s one thing to let old photos rot in closet shoeboxes or burn them in cleansing rituals. It’s another to post them online where we all would have had a lot of ’splainin’ to do today. Conversely, I also didn’t have the chance to share my personal acts of heroism that may have turned me into a hero for all time and eternity.

Among the many Internet blips that caused “buzz” this past week was the selfie Josh posted of himself at the scene of an accident he had just witnessed, and at which, according to his subsequent Twitter post,  he “Was first on scene to big accident, see pic of car in the house. I lifted 4 people out to safety. All ok. Thankful.”

With that selfie, Josh proved that, just as people inherit a genetic third nipple, a sixth finger or a clubbed foot, the famous out-of-touch, elitist Romney vanity also courses through Josh’s veins. He is indeed the son of his famous father, the equally socially tone-deaf Mitt Romney, savior of the Olympics, near-savior of the Constitution.

I’m not opposed to Josh’s selfie, despite that he has the red-eyed look of Satan in the photo and he appears to be wearing the latest Star Trek winter jacket. I’m not opposed to the fact that his selfie caught fire and brought him loads of both good and bad publicity. Good that he helped. Bad that he made himself the story. But hey, vanity is as vanity does, and let’s face it: Young Josh likely has political ambitions here in Utah, and any publicity is good now, even if it means looking like a schmuck on social media.

Heck, I might have done the same thing back in 1976, but I didn’t have a smartphone. I was driving north on Highland Drive at about 4600 South when a yellow Volkswagen heading south began weaving, then rolled over right in front of me. Thirty-seven years later, I know as much about first aid now as I did then, which is nothing. So, I gave the driver a blanket (it was common back then to cover your front seats with a blanket) and waited for the cops. That was that, and I lost the blanket. But I could have selfied, damn it!

A year later, in Wendover, another blackjack dealer and I decided to leave one bar for another, and we split out on a dirt back road in separate speeding cars. I’ll never know how I didn’t run over him when he rolled his car, barely feet in front of mine. He got in my car no worse for the wear, and we drove away. My selfie would have included us standing at the messed-up car, dust flying, some spilled blood and beer and the sun rising over the Salt Flats, our futures as blackjack dealers sealed.

But, poor Josh. He can’t catch a break. First, he gets criticized for not being a hero, as when his father famously proclaimed during the wars in Iraq and Afghanistan that “one of the ways my sons are showing support for our nation is helping to get me elected.” Let’s just say that’s more Cowardly Lion than Richard the Lionheart. And now that he’s happened on an accident scene and did what any normal person would have done (without posing), he’s also being vilified. I feel sorry for the guy.

No, wait. That’s a lie. I don’t feel sorry for him at all. He’s just another nitwit who succumbed to the smartphone allure of self-importance. (Note to my family, friends and staff: Josh is a nitwit, you are not.)

At least he wasn’t lighting a crack pipe like the mayor dude in Toronto. But they’re the same, really. They can’t resist.