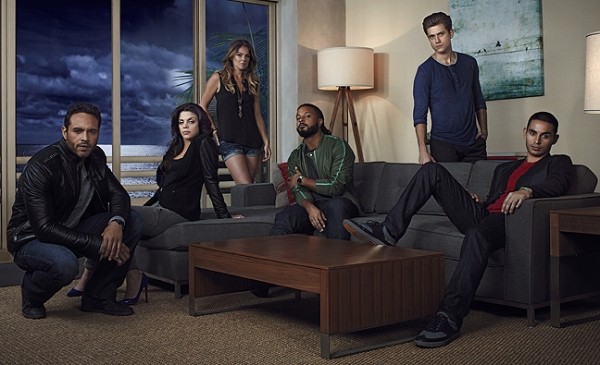 Season Premiere, Series Debut: Since they’ve now blown up everything in Miami and costar Gabrielle Anwar is desperate to taste carbs again, Season 7 will be the last for Burn Notice—yeah, I thought it would go on forever, too. At the end of last season, Michael (Jeffrey Donovan) had struck a deal to work with the CIA again in order to keep his team out of prison, royally pissing off girlfriend Fiona (Anwar) and screwing with the whole burned/unburned construct. Will the gang reunite for one last mission? Thirteen episodes says, “duh.” New drama Graceland—about a group of FBI, DEA and U.S. Customs agents working and living together in a SoCal beach house—doesn’t yet muster the chemistry and sizzle that Burn Notice had from the outset, but it does have more grit and realism than the average USA series. Oh, don’t worry, the cast is gorgeous.

Series Debuts: Fortunately, Lifetime seems to have picked up the Saturday-night B-movie slack (Jodie Arias and Anna Nicole biopics are on the way!) left by Syfy, who are ditching the monster/disaster flicks for the summer in favor of two new hour-long series—sorry, no Sharkadactyl or SnakeBear for you. Well, they’re new to us, anyway: Sinbad and Primeval: New World have already aired—and been canceled—in Britain and Canada, respectively. Sinbad, starring unknown Elliott Knight, is a new, higher-budget twist on the familiar swashbuckler story with an impressively whitey-free cast (Lost’s Naveen Andrews shows up, because of course he does); Primeval is about a team of sexy scientists charged with wrangling nasty dinosaurs that keep slipping through pesky time portals. Both are worth checking out, but don’t expect Syfy to pick up a second season of either if someone else isn’t footing the production bill.

Falling Skies
Sunday, June 9 (TNT)
Season Premiere: Several months after arriving in their new haven of Charleston, S.C., our ragtag 2nd Mass band of alien-invasion survivors have (mostly) gotten it together—and egghead Tom (Noah Wyle) is now the President of ‘’Merica, or at least what’s left of it. Also, unofficial First Lady Dr. Glass (Moon Bloodgood) is pregnant, rebel Pope (Colin Cunningham) has set up his own “Popetown,” a renegade group of Skitters are now working with the humans, and there’s a new, friendly alien race in town, as well, known as the Volm. So everything’s good in the ’hood? Of course not—there’s a mole in Charleston! Not to mention a “Rat King” (a loony scientist who lives underground and runs the power grid). Falling Skies is also more intense and bloody in Season 3, like Steven Spielberg is answering the “too family-friendly” whiners—mission accomplished.

King & Maxwell
Monday, June 10 (TNT)
Series Debut: It’s as if all of the new series TNT is rolling out this summer are specially designed to make The Only TV Column That Matters™ sigh, “You canceled Leverage for this?” Between The Rock’s reality-competition show (The Hero), the not-Rock’s reality-competition show (72 Hours) and a cold-case reality-doc series (Cold Justice—yes, it’s really called that), I’d already tapped out. Now, joining Rizzoli & Isles and Franklin & Bash in TNT’s Ampersand Alley is King & Maxwell, starring Rebecca Romijn and Jon Tenney as comically mismatched Beltway Secret Service agents-turned-private detectives: She’s a slob! He’s sensitive! They’re totally gonna do it! Sigh …