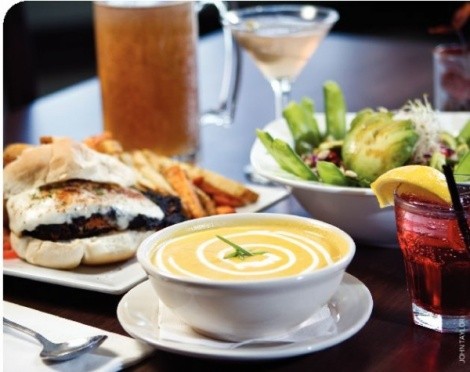 I don’t often write about bar food in this column because ... well, most of it is mundane and uninteresting, at best.

Not that there’s anything wrong with that— I’m usually happy with a bag of pretzels or a plate of chicken wings while I sip my pilsner. But, once in a while I come across a bar where the term “dining” can actually apply. Gracie’s is one such place.

I’ve been dropping by Gracie’s since it opened in June 2009, and, in general, I’ve been impressed by the vibe, the friendly, professional service and, most surprisingly, the food. Gracie’s is owned by former Port O’ Call-ers Deno Dakis and Shawn Frehner— and, frankly, the Port was never one of my favorite dining venues. But with Gracie’s, you get some of the fun and energetic atmosphere of Port O’ Call—along with great live music—in addition to upgrades, such as the aforementioned edible food and even drinkable wines. All of which makes Gracie’s much more than your average “bar.”

Make no mistake, though, Gracie’s is a bar. Your ID will be scanned when you enter, and if you’re under 21, you’re out of luck. Which is fine with me; now and then I need a break from kids’ menus, booster seats and crayon-strewn tables. So, belly up to the upstairs or downstairs bars, or hunker down to a table inside or on the patio to peruse Gracie’s extensive lunch and dinner menus. Selections range from standard-ish bar grub like nachos and (awesome) chicken wings to not-so-standard items such as Utah trout piccata and panko-and-pine nut-crusted salmon. Gracie’s also dishes up brunch from 11 a.m. to 2 p.m. on weekends, with offerings like creme brulée French toast, smoked salmon Benedict and granola and vanilla yogurt parfait (first time I’ve ever seen that in a bar).

I don’t encounter a lot of ox on Utah menus, and maybe that’s a good thing. But, like me, you might be curious and tempted by Gracie’s garlic ox burger ($10). While I really like the slightly gamey flavor of the ox burger, it tends to be a tad dry—probably a matter of being a little too lean, which is good if you’re watching your cholesterol but not so good if you’re looking for a juicy, lip-smacking burger. Thus, you’re better off with the more traditional Angus burger ($6) or the curry burger ($9). The latter is tasty and unusual, but I recommend ordering it without cheese; the curry spice flavor clashes with cheese, in my opinion.

All of the burgers and sandwiches at Gracie’s—from the grilled chicken with fromage to the chipotle steak wrap—come with lettuce, tomato, Dijon mustard, mayo and a choice of side salad, cup of soup or fries (sweet potato, standard or a combination of both). The roasted vegetable on rye sandwich will make non-meat eaters very happy: roasted red peppers, onion, zucchini and shiitake mushrooms with Gruyere cheese, mustard and lettuce ($6).

I’ve been pleasantly surprised by the soups at Gracie’s ($3 per cup or $5 per bowl), especially a hearty white bean soup with rosemary, which came alongside an excellent blackened salmon sandwich topped with fresh mozzarella and citrus mayo ($10). Other current soup options include butternut squash bisque and French onion soup with Gruyere and crostini.

One reason that Gracie’s bar food hits above-average heights is executive chef Sean Wilde, who has worked alongside chefs like Todd Mark Miller, Fernando Soberanis, John Winders and Dave Jones at restaurants such as Trio, Creekside at Solitude and Cannella’s. A Utah native, Wilde began his cooking career training at Alaskan resorts before returning to Salt Lake City. Log Haven’s Dave Jones says of working with Wilde at Trio, “He did a great job for Trio because he was passionate about food and backed it up with integrity. He was a standout in my eyes because he was always interested in pushing himself and gathering knowledge.”

But don’t expect cutting-edge cuisine at Gracie’s; the food is pretty solid and dependable, but not terribly adventurous. And there are oddities, such as a cheddar cheese topping for an otherwise appealing three-cheese “rotoli”: thick manicotti-style pasta used to wrap Italian sausage, chicken, bell peppers, onion, spinach and a combination of ricotta, mozzarella and Parmesan cheeses ($15). I can’t help but wonder, though, why you wouldn’t top the rotoli with mozzarella and Parmesan? Otherwise, the dish was very satisfying. A roasted half-chicken ($18), served with mashed sweet potatoes and (barely) caramelized carrots, was very tender and cooked appropriately, but consisted of two leg-thigh quarters—no white meat to be found, which was odd. And then there’s the menu itself. Since we’ve determined that Gracie’s is, at least in part, a “dining” establishment, someone might want to take the time to proofread the menu. Among the misspelled words are: piccata, brulée, frites, tuile and huevos.

But, as I said, there are nice surprises, like a beautiful snow pea and avocado salad ($7/$10) with red and Napa cabbage “slaw” and pine nuts. When did you last see snow peas on a bar menu? And another attraction—for wine drinkers, at least—is the wine list. For years, I’ve tried to counsel bar owners that just because they own a bar doesn’t mean they have to serve jug wine. Well, kudos to Dakis and Frehner for stocking drinkable (which doesn’t necessary mean expensive) wines, by the bottle and glass. Interesting options such as Saracina’s Atrea “The Choir” are available at reasonable prices, giving Gracie’s yet another leg up on your average bar.