Greece Is the Word

With a crowd-pleasing menu and traditional technique, it's easy to go mad for Mad Greek.

AT A GLANCE
Open: Monday-Saturday, 10 a.m.-9 p.m.
Best bet: Any of the dinner platters
Can't miss: The classic gyro is a classic for a reason 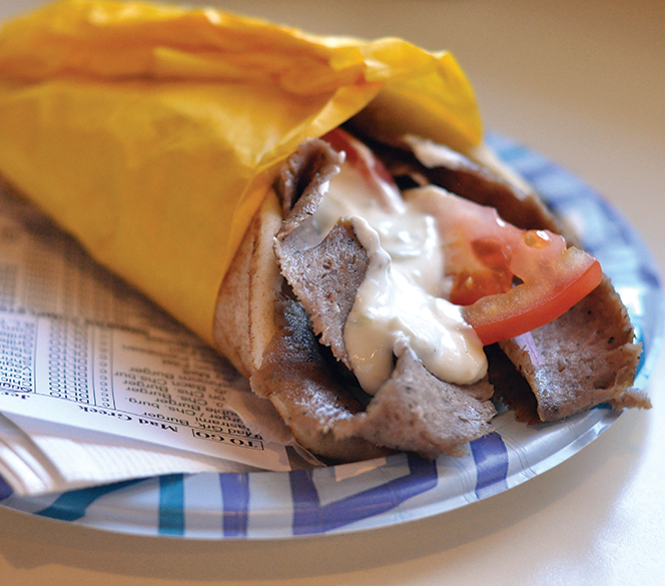 Although there are several exclusively Greek and Mediterranean restaurants in town, I've always been fascinated with those places that combine a traditional Greek menu with classic American diner food, like bacon cheeseburgers and eggs sunny-side up. It's fascinating to think about how one of the world's most ancient and established cuisines can blend in so easily with its surroundings, and even surpass them in some cases. Is it because the gyro is essentially the hamburger's great grandfather? Or is it simply because Greek food is known for embracing new ideas and influences wholeheartedly? Whatever the answer, a visit to Mad Greek is one of the best places to ruminate on the relationship between Greece and greasy spoon.

Both of Mad Greek's locations—one in Millcreek (4504 S. 900 East) and Mad Greek Too in South Salt Lake (50 E. 2100 South)—boast a gigantic menu that features a full roster of classic American diner staples, and their breakfast menu is one of the most cost-effective ways for a hungry diner to start the day. It's a safe bet to order anything from the American side of the menu, but if you're going to a place called Mad Greek and you don't indulge in a bit of tzatziki-slathered gyros ($6.95, pictured) or dolmathes over rice ($6.45), you're doing yourself a huge disservice.

I had built up a healthy craving for the gyro that I was inevitably going to order once I got there. I like to switch up my protein choice from time to time, but there is something about that huge shank of pressed meat hanging out backstage sizzling in its own juices that was filling me with pre-lunch glee. Diners are in no way limited to this protein, so if meat strips shaved from a monolithic chunk of lamb or beef aren't your thing, you can also get chicken, falafel and their pork sirloin steak gyro, which veers into cheesesteak territory with its grilled onions and mushrooms.

I'm all for experimentation when it comes to this part of the menu, but the classic gyro is the one that will always fill that marinated-meat-cone-shaped hole in your heart. Freshly sliced tomato and onion spike the salty-savory meat with just the right hit of acidity, and the tremendous gobs of tzatziki mellow everything out. I've had gyros that pile on the sauce only to have the yogurt be too tart, but here it provides just the right amount of contrast. The whole party is couched in a warm pillow of flatbread that doesn't strain against the sheer volume of food stuffed inside. If you're after a vegetarian option, I'd stick with the falafel over the veggie gyro, because those great balls of chickpeas make for a more filling endeavor and are much better suited to that tasty tzatziki.

When you're after something a bit more substantial, the dinner platter ($10.95) is a helluva bang for your buck. With 15 different options at that fixed price of almost 11 bucks, this is a meal that comes with your choice of entrée, salad, rice pilaf, a drink and a dessert of tapioca or rice pudding. It's a fantastic amount of food, and surprisingly well-balanced for a fast food joint. If you're in a committed relationship with the gyro, that can be your entrée. Steak more your thing? Consider it done—or well-done, if you like. I tend to stick with the chicken souvlaki platter because I enjoy the savagery of ripping my meat from charred wooden skewers. You'd also be hard-pressed to find a better rendition of marinated and grilled chicken. The kabobs look like they're just going to taste like plain old chicken, but there's some behind-the-scenes magic that happens to this poultry that makes them dance a hasapiko with your taste buds.

Entrées aside, one of the most unexpectedly pleasant parts of my visit were the dolmathes over rice ($6.45). This traditional dish consists of boiled grape leaves stuffed with ground meat, and it's a must-have for any Greek food novitiate. Most of my encounters with these little beauties has been characterized by a sharp spike of citrus that cuts through the earthier flavors, but the dolmathes at Mad Greek threw me for a bit of a loop. The citrus flavor is downplayed in favor of letting the rich, slightly bitter flavor of the grape leaves stand out. Mixed with the ground beef and rice, the flavors adopt notes more like sultana raisins, and it's delightful.

A common theme among the offerings at Mad Greek—and with Greek food as a whole—is that it looks deceptively simple on the outside while retaining centuries of flavors and spice blends just below the surface. The fact that this is a place that can turn out consistently good food at completely reasonable price points, in the same amount of time that you can order yourself a Big Mac, means that there is hope for balance and—I dare say—sophistication in a fast-food menu. Just check out one of Mad Greek's locations to see what I'm talking about.