Lawmakers do little to clean up chunky air 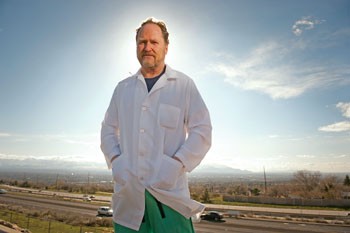 The Air Issue
Lawmakers fluff their wings but do little to clean up Utah’s chunky air.

January 2013 catapulted Utah onto the world stage—for all the wrong reasons. An oppressive smog extended from Provo, across Salt Lake City, and north to Logan. Only driving up to Park City afforded escape.

You could taste the air. You could see it, a brownish, thick haze. Throughout January 2013, Salt Lake City’s sky looked like something out of a 1950s sci-fi movie. All it required was a mad scientist screaming, “Don’t breathe the air!”

The American Lung Association ranked the Salt Lake City-Ogden metro area, Logan and Provo as the seventh, eighth and 11th most polluted cities, respectively, for PM2.5—the smallest particulate matter in the air, smaller than the diameter of a human hair, tiny enough to lodge in the lungs of those who breathe the air. In January 2013, Utah’s air hit 90 micrograms of particles per cubic meter of air in one-hour concentrations, close to three times the federally designated safe level of 35 micrograms of particles per cubic meter.

In a state that prides itself on the glories of its outdoor life, doctors were advising residents that being outdoors on a day with heavy pollution—a red-air day—was the equivalent of smoking a pack of cigarettes a day. The Utah Division of Air Quality (DAQ) warned citizens to stay indoors during red-air days, and schoolchildren weren’t allowed outdoors during recess. The DAQ estimates that 1 in 3 Utahns experiences some type of respiratory problem during high-pollution periods.

The smog finally dissipated in late January, the day before the 2013 legislative session began. Multiple activist groups rallied at the Capitol, demanding action during the session. At the same time, the Utah Governor’s Office and the DAQ laid the blame for much of the smog on the citizens, claiming vehicle tailpipes were responsible for 57 percent of the pollution. Air activists scoffed and accused the state of obfuscating a health emergency with numbers.

So, who or what is responsible for our dirty air, and what can we do about it?

The answer, if we are to look at lawmakers’ efforts, is not much. By the end of the session, little of substance, according to activists, had come forth.

The Democrats offered several bills. Rep. Joel Briscoe, D-Salt Lake City, proposed giving out mass-transit passes for two months of the year “to get you out of your car and getting to work on a bus or TRAX.” But he couldn’t get his bill out of the rules committee. UTA estimated the cost of Briscoe’s proposal at $9 million. “As soon as you start hitting cost, it engenders opposition,” Briscoe says.

Utah Physicians for a Healthy Environment’s president, Brian Moench, says Utah needs to address infrastructure for mass transit that “is broad enough that it becomes a realistic option for people.” He tried to take the bus to the hospital where he works, but found “I could actually get to and from work faster by running.” UTA’s bus service is “not convenient enough, too expensive, and has to be supported by public funds.”

Rep. Patrice Arent, D-Millcreek, introduced House Bill 168, which required state agencies to come up with a voluntary plan to reduce emissions from state fleets. The bill survived the legislative session, but drew little respect from activists, who felt it lacked teeth.

The Legislature passed three clean-air-related bills. The most controversial was Senate Bill 275, sponsored by Sen. Stuart Adams, R-Layton, which proposed additional infrastructure for state and private vehicles to be fuelled by compressed natural gas (CNG). Some saw it as a money-grab by the Utah Transit Authority, effectively getting Questar’s customers to pay for refueling and maintenance infrastructure through a utility rate hike. The bill made it through the session, but many questions linger about both its intent and impact on utility rates and pollution.

Sara Baldwin is a senior policy and regulatory associate for nonprofit Utah Clean Energy who says that discussions about air quality need to move beyond party lines. “We really need to start to get serious about what we can get done. At the end of the day, we are all breathing this air. We all live here, work here and want to play here, and our quality of life is declining every single day we have a red-quality air day. Our hope is to get past partisan rhetoric and move toward solutions.”

If the public saw little progress made to address the inversion, nonprofits like Utah Physicians for a Healthy Environment and Utah Moms for Clean Air nevertheless benefited from higher profiles as the clamor for solutions grew louder during the height of the inversion. Rep. Patrice Arent says, “They have been effective,” particularly in helping people understand the issues, “getting people involved, keeping the pressure on.”

Amid all the rhetoric and number-juggling, Moench argues the bottom line is people’s lives. He argues the state’s support for businesses at the expense of air quality is killing its citizenry. His organization estimates that 1,200 to 2,000 Utahns die prematurely each year from pollution-related illnesses.

“Governor Herbert is determined the economic future of the state is fossil fuels,” and that is something the Legislature agrees with, Moench says. Coupled with Utah’s traditional legislative disdain for environmentalism, the fight for clean air is an uphill one. “This shouldn’t be a political battle because it’s public-health issues,” Moench says. “But you’re labeled ‘political’ when you speak out forcefully for policy.”

The air has forced some Utahns to leave a state they love, while others stay but struggle with respiratory issues and other medical complications. Wherever the blame lies, what is undeniable is, as Briscoe says, “every person on the Wasatch Front is living a slightly shorter life because they’re breathing this air.”