In 1999, Andy Swapp bought a small farm outside Milford, in central Utah. When he plowed a field, the tail end of the Santa Ana winds, he says, picked up the topsoil and “sand-blasted the paint off the side of the barn.” That was when he realized the power of wind.

Two years later, Christine Watson Mikell, then with the Utah State Energy Office, and Swapp, who teaches shop and technology at Milford High, erected an anemometer, or “met tower” to gather data on wind patterns on his farm, near the highway, with the help of some of his ninth-grade students. Since then, Watson Mikell and Swapp have proved key players in developing wind farms in Utah.

Watson Mikell joined entrepreneurial startup Wasatch Wind in 2004 and helped develop Utah’s first wind farm in Spanish Fork, which was subsequently sold to Cal Edison. After initial local concern over its impact on the watershed and views, the nine giant wind turbines in Spanish Fork have become a symbol of pride for the local community, Watson Mikell says, celebrated even in an annual wind and kite festival. The turbines provide power to 6,500 Utah homes on average, and when spinning at maximum, generates enough power for 19,000 houses.

Swapp’s enthusiasm and fascination for wind proved contagious to his students, who would go home and enthuse about wind development to their parents. After Boston-based First Wind proposed what would become a 97-turbine wind farm north of Milford, in Beaver County, Swapp and his students “briefed the community commission, even the old folks home,” he says. “We pretty much educated the public.” The second phase of the wind-farm development in Millard County added 68 turbines in May 2011. 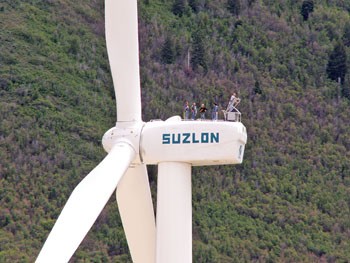 Crucial to any wind farm’s success is not only the transmission lines to supply the electricity it generates to customers, but also the demand to begin with. Ironically, says James O’Reilly, who worked on another wind-farm project in southern Utah for six months, the Milford project came about only because Southern California wants the energy it generates. He suggests that Utah’s longstanding commitment to coal means that not only is “there no demand within the state” for wind energy, “there’s actually huge resistance.”

Swapp says wind farms have proved a boon to his community. “We have 23 former students working in the wind industry.” That may not sound like a large number, but in a small town, he says, each and every job is a victory.

Rob Adams, former economic development director for Beaver County, adds that, along with providing $2.9 million in taxes to Beaver County in 2012, First Wind has little impact as far as using the local road system or emergency services. “I thought it was a dream come true for a rural economic developer,” Adams says. 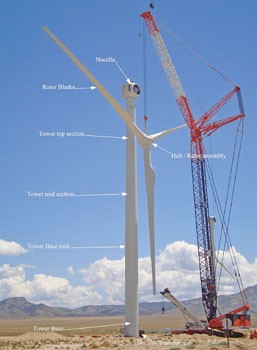 While some thought the wind farm unsightly, Adams thought it was “the coolest thing in the world. To me, it’s a symbol that we’re taking charge of trying to forge a different alternative energy future than where we have been going. And it adds an elegant feature to the landscape” that he says has attracted tourism.

“The wind industry is one of the fastest-growing clean tech sectors of our country,” says Utah Clean Energy analyst Sara Baldwin. Utah, she adds, has great wind resources, including the West Desert and the Interstate 15 corridor.

Which begs the question, why only two wind farm developments in Utah in the past decade?

The answer, in part, Watson Mikell says, is the complexity of the process, with wind farm developers having to negotiate “not in my backyard” resistance, conservation issues, permits and unexpected obstacles—such as, in the case of a shelved project near Cedar City, the military flying planes overhead that could have crashed into the turbines.

Ultimately, it seems, “in many people’s minds, Utah is a state that hasn’t embraced wind,” Watson Mikell says. While surrounding states have renewable portfolio standards—in Colorado, for example, it’s the law that a percentage of utilities’ energy comes from renewable sources—Utah has a “soft” standard, or voluntary, she says. In Utah, where business comes first, “it’s markets over mandates.”

Watson Mikell has been working on a project outside of Monticello, where ranchers are keen to extract income from land they pay taxes on, but don’t necessarily use. With a federal wind-production tax credit expiring at the end of this year, along with the possibility that the Public Service Commission, which sets rate levels, may cut the price of wind-generated power, she says there’s a rapidly disappearing window for wind farms in Utah.

“It takes a lot of wind to help with air quality,” Watson Mikell says, “but every bit of wind [farmed] that backs down a bit of coal helps the next generation.” Which is why, she says, “Every day, I feel good about what I’m doing.”


Milford High School will hold its fifth-annual Renewable Energy Fair on May 1. Visit SUTREC.org for details.