A Tale of Two Water Sources
Depending on where you live, your tap gushes with either mountain spring water or heavily treated water from tainted aquifers.

Salt Lake City
One of the most important jobs in Salt Lake City is held by a fish. Just inside the doors of the Big Cottonwood Water Treatment Facility, a solitary Bonneville Cutthroat Trout—nickname Bonneville—whips back and forth through frigid snow melt.

The fish tank isn’t heated, and there is no coral or tropical seaweed. And the water pumped in is raw, straight from Big Cottonwood Creek. As this water enters the plant to be treated, a portion flows into Bonneville’s tank.

The trout is the treatment plant’s first line of defense to ensure that hundreds of thousands of Salt Lakers have safe drinking water. If the fish suddenly ceases its endless trip around the tank, plant operators will know something is terribly wrong with the water entering the plant.

“If it goes belly up, something’s wrong and we stop it right away,” says plant manager Bill Meyer.

And fortunately for the 340,000 people who rely on this water, and for the trout, sudden death has never occured. 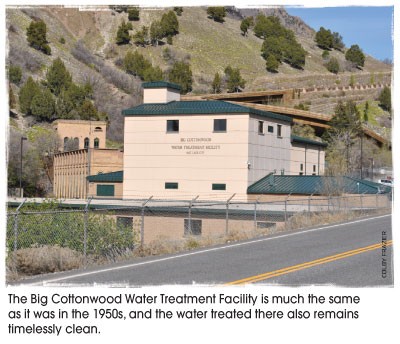 The water that flows down these creeks and makes it into the water supply is wildly clean, and because Salt Lake City is the first to use this water, it doesn’t require the same level of heavy-duty treatment as other water supplies across the West.

All water supplies, including Salt Lake City’s, are chlorinated to kill bacteria. This is one of the first things that happens when water enters the plant. In order for chlorine to do its job, it must be present for a prescribed amount of time. And, Meyer says, since water can move through the treatment plant in roughly four hours, and the first water customer is around the bend on Wasatch Boulevard, chlorine must be introduced at the beginning of the process.

The second step in the water-treatment process involves coagulation. A mix of positively charged material is introduced into the water to attract negatively charged particles, like dirt and other solids.

Next, the water makes its way slowly—it takes four hours at high flow and up to 20 hours when the creek is flowing slowly—to make the journey through a sedimentation basin toward the filter beds.

Big Cottonwood’s basin is the length of a football field. Above ground, it’s nothing more than a massive pad of concrete separating two buildings.

Meyer says the water slowly flows along this channel, allowing the majority of the solids to settle out of the water before entering the filtration room.

The filter boxes, which Meyer says last up to 12 years, consist of a foot of gravel, 20 inches of sand and another 20 inches of angular-shaped coal, which does a great job of refining the water Salt Lakers drink.

The process, Meyer says, is relatively simple—a credit to vigorous watershed protections that ensure the water entering the plant is as clean as possible.

Aside from the watershed protections—like limiting construction and septic tanks in the canyon, and preventing domestic pets and humans from frolicking in the creek—another important factor distinguishes this water supply: Salt Lakers are the first users of the water. This means Meyer doesn’t have to worry about catching wastewater deposited upstream by another municipality—as is the case in most any heavily used river system in the world.

“We are very fortunate to be the very first users of this water,” Meyer says, noting that in the Colorado River, cities take some water out, use it, then put it back in. A little way down the line, someone else takes the water. This process is repeated over and over again. 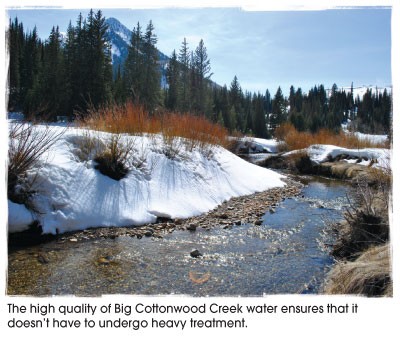 Not much has changed with the Big Cottonwood plant since it was constructed in the late 1950s. Laura Briefer, the city’s water-resources manager, says this is a testament to the continued quality of water flowing through the Wasatch Front’s canyons.

“The big takeaway, though, is that we haven’t had to change our treatment plant process to a more sophisticated and more costly system because our watershed protection has been robust,” she says. “And so the source water coming into the plant is of such high quality that really, we’re just treating to meet the EPA regulations for the treatment process itself.”

The Rest of the Salt Lake Valley
T he Jordan Valley Water Conservancy District, a wholesaler that supplies water to nearly every community in the Salt Lake Valley except Salt Lake City and parts of Sandy, draws a portion of its water from underground wells. Some of its wells were long ago polluted by Kennecott’s mining operations. And with more polluted water comes more intensive treatment techniques.

Efforts to clean up this polluted aquifer have been in the works since 1986, when the state sued Kennecott for damaging the aquifer. A history book could be written on this water saga, which involves a botched deal that would have let Kennecott off the hook if it paid $12 million, and a trip all the way to the Utah Supreme Court.

Doug Bacon, an environmental scientist with the state’s Division of Environmental Response & Remediation, who has overseen Kennecott’s response to this cleanup, says pollution began seeping into the aquifer in the 1960s.

The most polluted portion of the aquifer is near Copperton, where Kennecott operates its treatment plant. Bacon says this area was polluted by Bingham Reservoir, which was used to provide water for mining operations. The water was highly acidic and contained high concentrations of sulfate and other salts and metals related to the mining process.

The reservoir wasn’t sealed and, Bacon says, regulators determined that 1 million gallons had leaked out of the reservoir each day for years, slowly traveling east into the aquifer. Bacon says the reservoir remains, but is triple-sealed to prevent leaks.

A less-polluted section of the aquifer, located roughly between 2700 West and 1300 West, was fouled by 21 evaporation ponds that were used between 1937 and 1965 to catch storm water near the mine. This water, too, seeped out of these reservoirs and tainted the aquifer.

Yet another ground-water fouling technique involved Kennecott’s method of stretching the value of their waste rock by dousing it with acidic water, thereby exposing more copper. Bacon says this didn’t always work out well, with some of the acidic, copper-tainted water moving into the aquifer.

In the end, Kennecott and the Jordan Valley Water Conservancy District decided to build a pair of reverse-osmosis treatment plants to clean the dirty water. Kennecott has been operating that treatment plant for a few years, but the water district has encountered hurdles. The main issue, Bacon says, was cleared up only this year.

When water is filtered using reverse osmosis, clean water goes out one end and waste goes out the other. Residents of South Jordan, West Jordan and Herriman drink some of the treated water. The waste, Bacon says, contains high concentrations of the pollutants—salts and metals—that also must find a home.

The water district proposed a plan that involved building a 21-mile pipeline to Gilbert Bay on the south end of the Great Salt Lake, where the waste product would flow into the saline waters there.

But when the plan was first unveiled several years ago, regulators and environmental groups worried that high doses of selenium—one of the pollutants being filtered out of the water—could harm the millions of birds that call the Great Salt Lake Home. According to the EPA, in high doses, selenium in drinking water can cause humans to lose their fingernails and hair and can negatively impact circulation. In birds, Bacon says, it causes deformities in babies, and can even prevent reproduction altogether.

The water district’s plan—now based on a $2 million study that aims to protect the lake’s bird populations—was given the green light by the state’s division of water quality earlier this year. Over the past year, the water district has operated its reverse osmosis plant, disposing its waste in Kennecott’s tailings impoundment. But Bacon says he anticipates the pipeline will soon be extended into the lake.

All told, the two reverse-osmosis treatment centers will filter 8,235 acre-feet of water per year. Bacon says an acre-foot of water—326,700 gallons—is enough to supply a household of four for an entire year.

Making this polluted water fit for drinking will cost Kennecott as much as $80 million, an environmental assessment document of the project shows. And the water district, through the issuance of bonds, is expected to foot $20 million of the bill.

Whether public safety or saving money is the goal, there is much value in protecting water resources.

“What you can do to protect the aquifer—to protect that source in the future—is advisablze in any situation,” Bacon says.