Squatters is committed to the environment, community & profits. 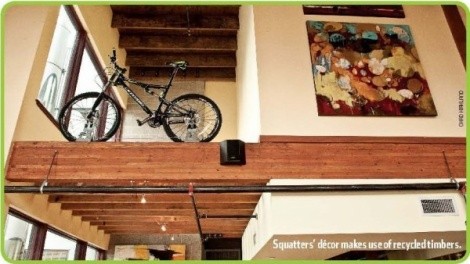 Perhaps Squatters was green before green was cool, insofar as it has always tried to reuse and recycle. When the original Squatters brewery and pub in downtown Salt Lake City was initially under construction in April 1989, Squatters’ founder and partner (with Jeff Polychronis) Peter Cole was wandering over to Valley Bank. He jokingly says he was out of money. At the time, the city’s redevelopment agency was doing an improvement on West Temple. According to Cole, “They had the street all dug up and I could see that two feet or so underneath the asphalt were these beautiful cobblestones. And then, just on the other side of the street I saw a backhoe digging up some massive solid sandstone curbstones. So, I said to the guy digging them up, ‘What are you going to do with those?’ And he said, ‘They’re going to the dump.’ Anyway, our contractor got in touch with the supervisor of the West Temple project, and I think, like, $20 changed hands and we wound up with about 12 tons of cobblestones and curbstones, all covered in asphalt.”

Cole spent about a week dressed in what he calls a “spacesuit,” sandblasting the asphalt off of the curbstones and cobblestones. That recycled portion of West Temple is what was used to build the fireplace and other portions of the original Squatters.

When the brewpub was seismically upgraded in 2005-2006, the builders brought in beams that were previously part of an airplane hangar and put those to use. Likewise, the outside patio fence is made of reclaimed redwood from wine fermentation tanks.

All of which raises the question: Where is the line between being environmentally conscious and just being cheap? According to Cole, “Maybe it’s more about being environmentally conscious and cheap.” To him, one positive thing to come out of the current recession is that he hopes people will learn not to waste things, whether electricity, gasoline, water or whatever. “When you travel to foreign countries, you see how much people reuse everyday items that we toss out,” he says.

For James Soares, Squatters’ director of environmental and social responsibility, it’s not so much a matter of being frugal or cheap, but about extending the lifespan of an object—giving it another chance for it to be something else before it ultimately ends up as waste. Some of the dining tables at Squatters, for example, were made of recycled timbers salvaged from a fire.

So, did Squatters have a “master plan” about becoming a green business? According to Amy Coady, Squatters’ director of sales and marketing, “It wasn’t like we just sort of decided to be green. It was more like, well, we’re already doing this—trying to buy organic ingredients and support local companies and buy a faucet that uses less water, for example—so, why don’t we also do that. One thing leads to another.”

Over time, the overall vision, mission and philosophy behind Squatters’ environmental and community commitments began to solidify into a structured economic practice. The folks at Squatters call it their “triple bottom line.” Whereas “bottom line” in businesses typically relates to profits, at Squatters the triple bottom line is people, planet and profit. So, every time a business decision is made, Squatters takes into account how it affects the planet, how it affects people (the community, customers, employees, etc.,), and how it affects profits. Regarding the latter, Squatters operating partner Joe Lambert says, “Because obviously, if you aren’t doing good [making a profit], you can’t do good.”

Quite simply, the Squatters business model holds that a business must be healthy in order to support its employees and its community. When the business is sound and profitable, the more it can give back to its staff, to the community, and do what is right for the planet, environment, people and their futures.

Speaking with the Squatters group, the word community pops up frequently. Peter Cole says, “As a company, we’ve always been community oriented. We chose to open Squatters in this community, even though there were obvious challenges. Remember that Squatters was considered to be on the ‘wrong side of the tracks’ when we opened. Well, we wanted to be good citizens. And so, we started to take the idea of ‘being green’—which is a community gesture anyway— and incorporate it into every business decision we make.”

You also hear the term “local” frequently when talking with Squatters. But is local always better? Not necessarily. According to James Soares, “Quality is always the No. 1 thing.” So, when he’s purchasing ingredients or goods for the restaurant, Soares looks at quality first, then asks, “Is it local?” From there, he considers organic versus conventional and so on. But local is good for a lot of reasons, including that the money stays in the community. “As a responsible business in any community, you should always think ‘local first,’ ” says Soares. On the other hand, Squatters gets its buffalo for burgers from Nebraska. Why? Well, because buffalo that are raised on sweet grass taste best and Utah doesn’t have sweet grass. It’s a quality issue. “So, sometimes you have to look beyond or outside the bio-region you operate in,” Soares says.

There’s a common notion that it’s more expensive for a business to operate “green” than not. And Peter Cole concurs—up to a point. There is an initial cost outlay, he says. “You have to spend money to make a change— investing in waterless urinals, for example. But, as soon as you do that, then you’re saving on your water bill every month.”

But Soares and Cole do agree that there’s a misconception that being green and sustainable ultimately cost more. “That is not correct,” Soares says, emphatically. In every “return on investment” equation done at Squatters, they add in the cost of clean water, the cost of clean air, the cost of having healthy customers and so on. So, if Squatters uses less water with waterless urinals, that means less water is going into the sewage system, less water has to be treated and less water has to be processed, which means there’s more good water for everybody. Although perhaps unusual in traditional business accounting, those are all additional “returns on investments,” which Squatters calculates into its business model. And in fact, it has saved about 850,000 gallons of water per year since installing waterless urinals.

Solar energy, too, fits into the Squatters green scheme. It has partnered with Scott Whitaker, who has the “solar saucer” you might have seen around town, and they are experimenting with powering their beer truck from that saucer. Soares says, “Hopefully, that’ll get us one step closer to putting panels on the actual truck and not have to plug it in to chill our beer.”

Not according to Soares, who says, “Capitalism is alive and well in our business model.” For instance, when Squatters designed napkins for its restaurants, it wanted to help advertise the company making the napkins, Tork USA, and let people know about them. So, Squatters was able to negotiate a very favorable price for its recycled napkins by partnering with and advertising a company whose values they share. “That’s capitalism,” says Soares.

In recent years, Squatters has also become more involved in environmental education at the community level. It started in-house, insofar as Squatters realized that when it made certain changes—using recycled glassware, for example—Squatters had to educate its employees about why the company was making those changes. In the past couple of years, Squatters has also teamed up with the Utah Society for Environmental Education and Recycle Utah, working to educate kids about sustainability issues.

According to both Cole and Soares, Squatters also is more than happy to share information and try to help educate other interested business people. “Our information isn’t proprietary,” says Cole. Adds Soares: “We don’t have secrets. So, when I get a call from another restaurant and someone says, ‘Boy, I saw your to-go bag, and I’d really like to get those for our restaurant,’ we make that information available. That’s true capitalism. ” If Squatters can actually help create a larger market for such products, ultimately, the price will drop and it will be cheaper for the company. “We don’t want to be the only ‘environmental’ restaurant,” says Soares; “we want to be a leader in a community where everyone is environmentally and socially responsible, where everyone is thinking about sustainability, and where everyone is making innovative decisions, because that’s going to bring more people to Salt Lake and to Utah.”