Winners of Velour's Battle of the Bands 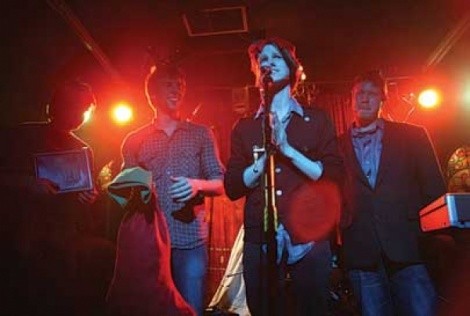 At exactly 8:05 p.m. on Saturday, Dec. 10—right as I happened to be walking up to Velour—a giant Lewis Stage Coach bus pulled into historic downtown Provo and stopped on University Avenue in front of the venue. People quickly unloaded, filed through the doors and took their places near the stage.

As it turns out, the “party bus” was rented by Salt Lake City band Grey Fiction, who competed in—and won—Velour’s Winter Battle of the Bands, held Dec. 5-10. The band wanted a way to transport all of their Salt Lake City fans to and from the show. Genius.

Shouting, headbanging, energized fans—along with an amazing performance—helped the band of three brothers become victors. It was a fierce battle, but I think the band that deserved to win did, in fact, take home the stocking full of cash, the plaque and the title.

I’ve had the opportunity to be a judge in Velour’s semi-annual Battle of the Bands for the past several years, and in each competition, it proves difficult to choose just one winner. That said, I don’t think any was as challenging for me as this year’s competition.

As judges, we rate each band on a scale of 1 to 10 in the following categories: musicianship, stage presence, vocal performance, crowd response and songwriting. One of the most challenging parts is remaining objective. Sometimes, a band you normally wouldn’t listen to is better than a band that plays your favorite genre of music. It’s crucial to put your musical preferences aside and judge strictly on the set criteria.

Other incredible performances throughout the week worth mentioning came from The Lucky Strikes, The Blue Aces, Brady Parks & the Indianns and The New Electric Sound.

Grey Fiction plays an incredible combination of ’90s alternative rock and experimental shoegaze set to Paul Muusse’s unique, sometimes wailing vocals that reminded me, at times, of fellow Salt Lake City musician Boots to the Moon. Combined with the lights, the fog and a slowed-down, beautiful acoustic song, the entire performance was epic. As the night went on and each band took the stage, I couldn’t help but compare each act to the first. It came down to just two bands for me, but I went with my gut feeling and decided on Grey Fiction.

I was surprisingly nervous as Velour spokesperson Kaneischa Johnson walked onto the stage with the results. As she announced the winner and I heard Grey Fiction’s name, a strange “Wahoo!” escaped my mouth. The room exploded with applause and the band went onstage to claim their prize.