Grille at Garage on Beck 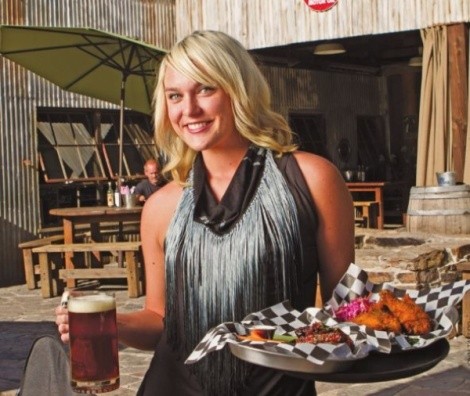 Hanging out in the shadows of North Salt Lake’s oil refineries isn’t normally my idea of a good time. It wasn’t, that is, until I discovered The Grille at the Garage on Beck Street, formerly Club Jimax. It’s an unusual location for a pub, for sure, and an even more unlikely place to get a good meal. But don’t be fooled by the surroundings; the Garage is an oasis in an industrial desert.

Amazingly, there’s even a very appealing outdoor area—merely yards away from oil rigs. Big trees mostly hide the ugly backdrop, and there are tables and chairs outside with umbrellas to protect customers from the sun—there’s even a horseshoe pit. Inside, the owners—who also operate Jam and Stoneground—have done a great job giving the Garage a semi-industrial look, but with lots of wood. It’s a very comfy, inviting spot with servers that couldn’t be friendlier. A server like Tegan—who does double duty at the Bourbon House—made a weekday lunch with managing editor Dan Nailen very enjoyable.

Things get even better when there is live music, as was the case recently when the great guitar slinger Bill Kirchen took the outdoor stage to play for an admiring crowd. My uncle, Charlie Ryan, wrote and recorded the first version of “Hot Rod Lincoln,” which Kirchen turned into a hit when he was with Commander Cody. And he still plays the hell out of that song. When he appeared at the Garage, I was lucky enough to be able to hang out at a table with him, former Dead Goat Saloon owner John Paul Brophy and former Zephyr owner Otto Mileti. The fact that oldsters like us felt so at home at the Garage says a lot about what this place isn’t: pretentious. It’s not a hipster hangout, although everyone is welcomed warmly.

This isn’t the type of eatery I normally review: a place with a rather limited bar menu. But I was so pleasantly surprised by the quality of most of the food that I deemed it worthy of noting. Kirchen was so happy with his Philly cheesesteak ($8) that I decided to take a chance on one myself. Wow. This is one of the best cheesesteaks around. A copious amount of thinly sliced grilled beef was topped with onions, mushrooms and peppers (all optional) and, better yet, Whiz, if you want it, which I did. Putting the Garage’s cheesesteak over the top, it’s served on a genuine Amoroso roll from The City of Brotherly Love.

Chicken wings ($7)—called “Refinery Wings” here—are a good start to any Garage meal, although I can’t really recommend the “house habañero molasses sludge.” This is an interesting mélange of sweet and hot from the molasses and habañero sauce, but with an icky garlic-powder aftertaste. Lose the garlic powder, and these wings would be as yummy as they are messy. Until then, though, stick with the classic Buffalo-style wings. A hummus plate ($6) is big enough to share with your favorite army—a large platter of crostini bread slices and veggies (carrots, squash, chopped radish and more), with a bowl of tasty housemade hummus in the middle. I just would’ve liked to have more hummus and fewer veggies; we ran out of hummus long before the veggies and crostinis were gone.

The Garage offers a full bar stocked with lots of liquor, lots of beers and another nice surprise: a small, but alluring wine list. It’s proof that just because you’re primarily a bar, and not a full-scale restaurant, doesn’t mean you can’t offer something besides jug wine. For example, Saracina Vineyards Atrea “The Choir” and Honig Sauvignon Blanc were two of the options on the 10-bottle-or-so list. So thank you for giving us wine drinkers something to enjoy.

Along with the Philly cheesesteak, the kitchen also nailed the po’boy sandwich ($8). Mr. Nailen had a fried-oyster po’boy, with mounds of crisp, fried oysters on a hoagie roll, topped with shredded lettuce, tomato and a zippy rémoulade sauce. Breaded, deep-fried shrimp is a second po’boy option—and just as delicious as its oyster cousin. Sandwiches at the Garage come with a choice of a side dish: coleslaw, cottage cheese (does anyone actually order that?), baked beans, house-cut fries, potato salad, pasta salad or a side green salad.

Now, the grub I’ve mentioned so far has been mostly very, very good. But if you really want to reach for the stars, you must try the fried chicken. It is simply outrageous, some of the best fried chicken I’ve ever eaten, anywhere. There are two chicken options: You can order the Southern fried-chicken plate ($9), which is three pieces of fried chicken and a side dish, or you can opt for chicken & waffles ($9). The latter is also three pieces of deep-fried, crispy and tender chicken, but with a big waffle, served with butter and maple syrup. Last year, the hip foodie trend was bacon. This year, it’s chicken & waffles, versions of which are being served even at upscale eateries. Well, you can’t go wrong ordering chicken & waffles at the Garage. I would also point out that it’s a helluva lot of food for $9; I couldn’t finish all of mine.