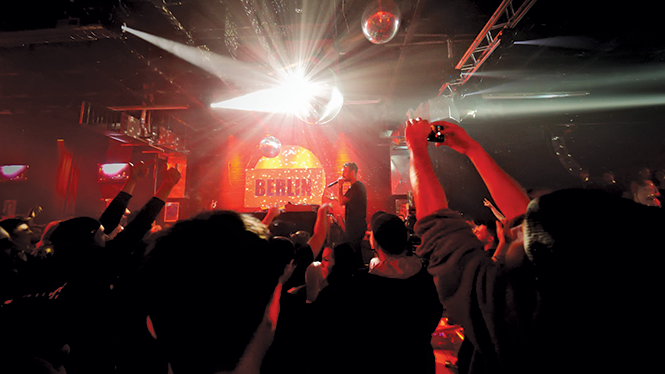 As a city grows, so does its avenues for entertainment. Niche locations like Area 51 are now being joined by a wellspring of underground spots and subversive DJs. If you're jonesing to groove to dark wave, disco, funky house or anything else a little different, look out for these names.

Feel the Beat at The Block SLC
The Block, a fairly new venue, seems to get its name from its block-like old warehouse in the Granary Row district. The building has been restored and turned into a BYOB (bring your own booze), late-night dance haven. BYOB places like this are popping up all over the city. Besides being a great way to save money on booze once you're dancing and thirsting for alcohol fuel, this trend seems like a great way for new venues to open and operate in a city where liquor licenses are expensive and difficult to obtain. It is, of course, 21+.

This way, too, The Block can focus entirely on its goal of providing fantastic, unique listening and dancing experiences in its electronic music-focused event space. Boasting a Funktion-One sound system—which is found in some of the world's most famous nightclubs, such as Berghain in Berlin—they're perfectly primed to support the kind of music they want people to dance to. They've worked with the New City Movement—which organizes events in other venues—to create nights like Body Heat, a house-oriented concert featuring DJs Easy, Artemis, Jesse Walker, Matthew Fit and Red Spectral. They've also hosted the recurring Social Disco Nights, which are vinyl-fueled evenings of glittery dance and revelry, supported by event organizer Nightfreq. The Block's next event features bass-thumping expertise from the Vancouver-based Perkulat0r on Saturday, Feb. 8. Like all their events, it starts late, and the lineup stacked with locals stretches far into the evening—or rather, morning. If you haven't stopped into what is quickly becoming SLC's go-to spot for night owls and electronica devotees, do it soon—and don't forget to BYOB. Perkulat0r, Lost Rejects, KubZ b2b Haap, Hooskie b2b Enderr, Drix, Matone, Prajekt @ The Block SLC, 625 S. 600 West, Saturday, Feb. 8, 9 p.m., $25 presale; $30 door, 21+, facebook.com/theblockSLC

S&S Presents a Portal to Europe
While S&S Presents—which is the daddy of The Urban Lounge, Metro Music Hall, Kilby Court and The Greek Station, to name a few—has primarily put on shows with bands over the years, they're starting to give DJs the opportunity to take center stage. What first caught my attention were the Berlin Nights, hosted at the cave of a venue that is Metro. The space mimics the grittiness of a Berlin nightclub, red light imbuing the air with a feverishness complementing the booming music, and bathing the white, graffiti'ed sheets that are draped everywhere in a ruddy pink. The green room, usually preserved for bands, becomes a secret bar, which you get to by climbing a long, narrow flight of stairs. It feels pleasurably illicit, and a little scary coming back down if you're drunk.

Berlin Nights had a big push in January, with three back-to-back nights kicked off by legendary electro-swing DJ RJD2 (who, as every single person I talked to about it told me, did the Mad Men theme), followed by a dark-wave-ish DJ set by members of Choir Boy the next night, and one by popular local DJ and Alibi staple Bo York the night after that. While the next Berlin night won't manifest until April, there's another inspired night of grooves going on over at The Urban Lounge by way of Dolce Vita, an Italo Disco and Eurodance-infused night. Tunes will be spun by DJ Red Scare, who besides having maybe the best DJ name ever, will be using her darkwave expertise to bring light to the night, alongside a DJ set by local goth duo Fossil Arms. Whether you'd rather be transported to a Berlin warehouse party or a darkly-infused disco party, keep up with both venues at sartainandsaunders.com Dolce Vita @ Urban Lounge, 241 S. 500 East, Saturday, Feb. 8, 9 p.m., free before 10 p.m.; $5 after, 21+, theurbanloungeslc.com

Honorable Mention: Inhell x Exhell
Mentioned earlier as the organizers behind the Social Disco Nights, Nightfreq also helps to organize Inhell x Exhell, an amazing pun for a very serious night of darkwave that just wrapped a third iteration. It took place, interestingly, at Rye Dinner and Drinks, the restaurant next to Urban Lounge. It marks an interesting and innovative use of space that, when not operating as a business during the day, sits quietly at night when the space could very well be used for nefarious nights of dance instead. Inhell x Exhell demonstrated the possibilities that lie in empty spaces at night, with DJ sets by Precious Blood, Ghetto Dracula, Ultrabear and 2 Hands. In the past, they've collaborated with Mona D and Deb Demure of current goth darlings Drab Majesty. Their devotion to the spookier tangents of dance music is reason enough to wait until their next event, which you can find at nightfreq.com.