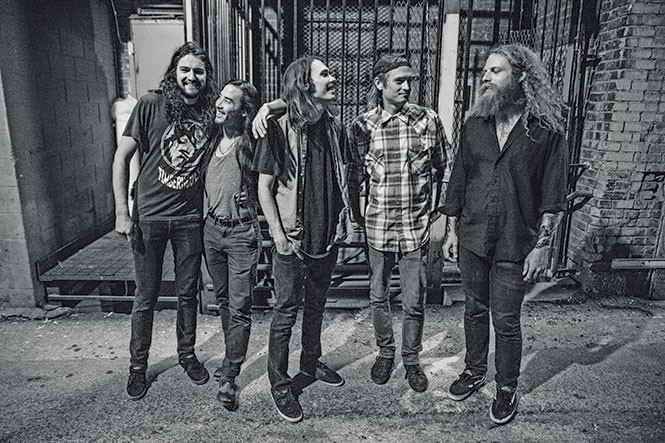 Max Pain and the Groovies is one of the hardest-working and most highly regarded rock bands in Salt Lake City. But at the heart of it, they're just a bunch of friends who enjoy playing music together. Naturally, they have a lot of friends among their local fan base, so the decision to relocate to New York City to further their musical careers has been bittersweet. City Weekly convened with them in the basement of Poplar Street Pub to quiz them on their style of maximum rock 'n' roll.

Band members—singer/keyboardist David Johnson, guitarists Shane Preece and Dallin Smith, Kallan Campbell on bass and drummer Troy "Tcoy" Coughlin—are 20-somethings with a history. Coughlin, Preece and Smith started jamming together in basements when they were barely in junior high. Johnson and Campbell joined later, and as they got older, music seemed a natural accompaniment to skateboarding and partying.

Skateboarding isn't usually associated with the kind of psychedelic-tinged rock 'n' roll they play, but it fits their spontaneous mode of creation. "We'll get together and jam, and somebody will make up a part, and we'll just go with that," Preece says.

"We never sit down with a plan," Johnson adds. "It just kind of comes out, then we shape it after that." Another person who's had a big hand in shaping their sound is local producer Mike Sasich, who twisted the knobs behind their recordings, from their 2013 self-released EP to their first full-length, Electro Cosmic (2015), and their latest, Ancient Grease—the band's first album since signing with Los Angeles garage-rock label Lolipop Records.

Cassette tapes are the new vinyl; the new hip medium. The Groovies' self-titled EP was released on vinyl by Lolipop, while they self-released the cassette; Electro Cosmic was on their own Psych Lake City label, while European label Eager Waves put out the CD version. Lolipop—which Coughlin connected with when he sat in on drums for San Francisco band The Spyrals—will release Ancient Grease on all three formats. "We sell more cassettes than anything, next to T-shirts," Johnson says. The affordability of cassettes is a nice counterpart to the pricier, collectible aura of vinyl.

The Groovies have made a huge impact on the local music community through their Psych Lake City label, releasing local psychedelic-oriented music and promoting shows. "It all goes back to Spell Talk days," Johnson recalls, saying that PLC's core bands—the Groovies, Spell Talk and Dark Seas—"teamed up to have shows and collectively engage our friends, and we all emerged as one great group of friends." That was two years ago. Since then, Spell Talk broke up, and Dark Seas dissolved as members moved away. But the collective has helped reinforce a sense of local community in garage/psych fans, and Dark Seas will reunite to play Max Pain's album release/farewell show Oct. 28.

Like most bands, Max Pain and the Groovies started out playing for small groups of friends, then built up a fanbase over a few years. But they've achieved more success than your average band: They've toured all over the country, have played South by Southwest four times and were voted Band of the Year in the 2012 City Weekly Music Awards (now called Best of Utah Music). "We have met a lot of bands along the way, and Psych Lake City has been a good way to help them get shows," Johnson says. "It's been a good thing for Salt Lake for other touring bands coming through that we want to help, who in turn help us when we're on the road."

Ancient Grease shows them progressing as musicians: more confident, willing to experiment, while letting the music flow easily. There are inside jokes that you can enjoy even if you don't get them: the jaunty opener "Don't Shake My Busch" could be about a jostled beer can, or their nickname for their tour bus, or a real story about Johnson almost getting into a fight with a homeless person after an altercation with a topiary. The album also has darker tracks; the subject of "He's Come (The Stranger)" comes around and "makes you do things you regret," while "Evil Mountain Desert People" is a tongue-in-cheek, mock-sinister jab at the local scene.

As groovy as the local scene has been for them and others in Psych Lake City, touring outside the state seemed to open up their eyes to new possibilities. Repeat visits to the same cities helped them build up a wider fan base, and they found their circle of friends expanding. In New York, they plan to crash at a friend's until embarking on their first European tour early next year. Still, they'll miss SLC—where, Johnson says, "You can go anywhere and some of your friends will be there. It's gonna be weird not having them right by our side."