Bears Ears' only visitor and education center isn't run by the feds. 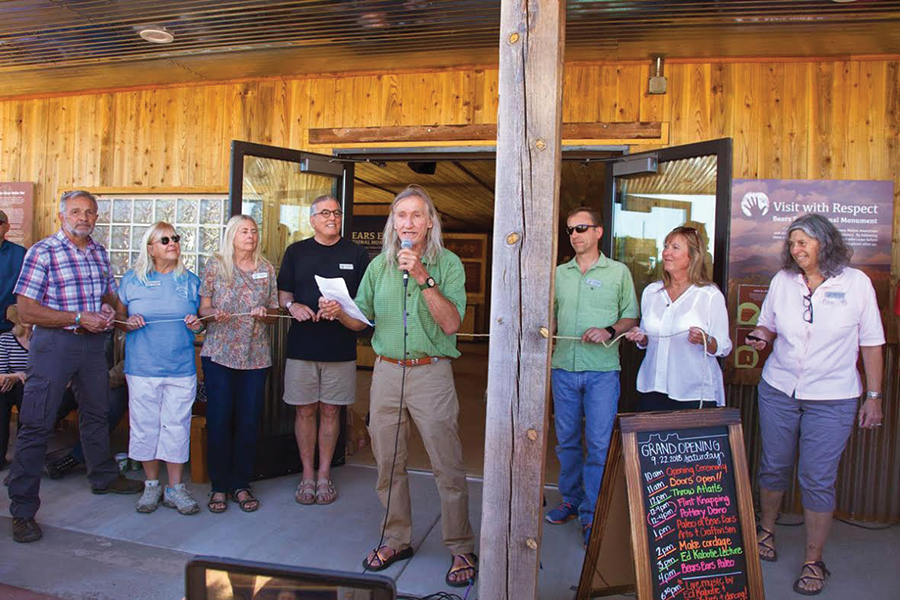 The terracotta mesas and umber buttes proclaim this is an exceptional place. Yet not one sign from the Bureau of Land Management or U.S. Forest Service, the two federal agencies that jointly manage Bears Ears National Monument, indicates where it's actually located. There are no federal facilities to serve the rising tide of visitors.

"It's managed by Google," says Josh Ewing, executive director of the land-conservation nonprofit Friends of Cedar Mesa, based in nearby Bluff. "Because that's the only place people are getting their information." Ewing, a Nebraskan with a stubbly beard and a quick smile, is a climber whose 20-year love affair with the landscape turned him into an activist for Southeastern Utah's public lands.

In the absence of a federal presence, Ewing and Friends of Cedar Mesa raised $700,000 from crowd-funding site Kickstarter and built the Bears Ears Education Center last year. The local climbers, guides, conservationists and educators saw the growing hordes descending on the fragile, embattled monument and feared visitors could permanently damage the landscape.

The center's refurbished wood-slat façade evokes the Old West. The building once housed a saloon frequented by uranium miners in the 1950s. Now, it greets travelers headed to a culturally bountiful landscape, where indigenous communities have lived for thousands of years.

But the political controversy has only increased the monument's visibility, and since 2017, visitation has overwhelmed resources on the ground.

Federal agencies estimate that more than 130,000 persons descended on the newly shrunken monument in 2017, a 72% surge from the year before. BLM estimates put the monument-wide number in 2018 as high as 750,000. But even greater numbers are expected: Fodor's, the popular travel guide publisher, ranked Bears Ears at the top of its list of recommended places to visit in 2019. (Visitor resources currently available include the Kane Gulch Ranger Station and the Natural Bridges National Monument visitor center, each about 40 miles from the town of Blanding, Utah.)

"There's all this publicity happening, and yet there's no official visitor center," Ewing says. "That's the sort of challenge we're trying to meet."

Ewing's staff will interact with at least a portion of that influx; he hopes that 10,000 people will pass through the doors this year. Inside the center, exhibits illustrate the region's history and cultural significance and describe the continuing efforts to protect it. A virtual reality exhibit, expected to open this summer, will immerse travelers in sites too sensitive for large-scale visitation.

Already, many sensitive sites are getting hammered—resulting in unauthorized new trails, vandalized rock art, pottery shards picked up by looters. Lyle Balenquah, a Hopi citizen, river guide and former National Park Service archaeologist, assists Friends of Cedar Mesa with archaeological recording and restoration projects for the center. As a freelance contractor, he surveys monument sites and collects data for the BLM, Forest Service and tribes to use to monitor impacts. He's seen firsthand the damage inflicted by uninformed visitors.

"That's where this need for places like the education center comes in," Balenquah says, "to try and help fill that void of what it means to visit with respect."

To educate the public about how best to interact with a complicated landscape like Bears Ears, the new education center's creators want tribal citizens guiding its vision.

The Inter-Tribal Coalition, an alliance between the Hopi, Navajo, Ute Mountain Ute, Zuni and Ute tribes, wants a presence on the landscape, too—possibly a facility of its own that might operate as some combination indigenous knowledge institute, visitor center and coalition headquarters. It is also collaborating on a key exhibit for the education center. But right now, it's focusing on the monument lawsuit and a land-management plan it is drafting in conjunction with the BLM and Forest Service, so progress is slow. For now, the Bears Ears Education Center has to stand in for its needs.

Ewing hopes the federal government will partner with tribal nations to build a more "official" facility at the monument. "We hope [this center] is an interim measure," he says, "and we'll be happy to put it out of business."


A version of this article originally appeared in High Country News.