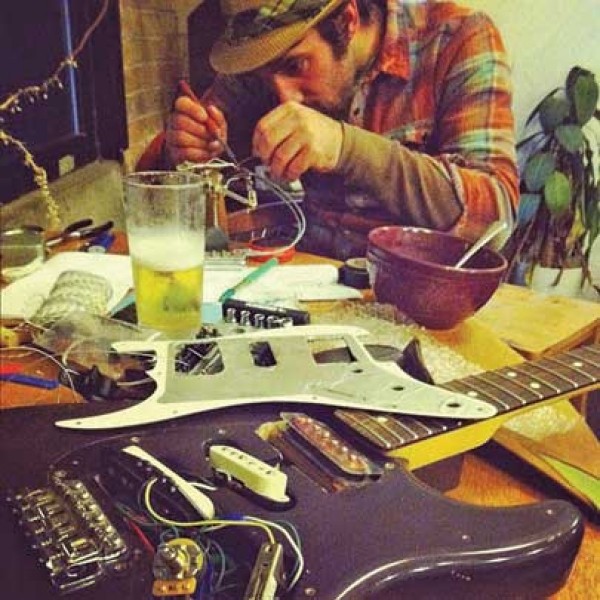 The bassist and amateur guitar- effects-pedal builder is displaying the innards of a green Russian Big Muff Pi—actually, it’s a clone (an unfortunate second Star Wars reference). I’m about to buy it in response to a classified ad.

Wursten threw himself into what he hopes to be his future career because of this particular model of fuzz pedal. While recording an album, he couldn’t find the perfect sound that he wanted, so the producer handed him a green pedal—a limited-edition Russian-made version of the Big Muff Pi, adored for its creamy tone. Afterward, when Wursten realized that a used one cost more than $300 online—out of his budget—he sought other options.

Wursten ventured into pedal building for thriftiness’ sake, but soon realized it’s a perfect means for his geekery to turn into profit or, at least, make for a useful hobby as he hunts for the Holy Grail of tone.

Wursten’s bandmate Jarrett Miller also builds pedals; in the past year, the two have come to be the fulcrum of a small, but burgeoning, pedal-builder community.

“It’s cool to have a problem that you’re banging your head against the wall about and have someone to talk to and give it a fresh pair of eyes,” Miller says as he lays down components of a second-generation Pro Co RAT distortion pedal. This no-longer- manufactured, in-demand and uber-expensive RAT is desired for its unique sound, thanks to a specific chip (LM308, from the mid-’80s). “I want to build [Pro Co’s] pedals, but with all the kick-ass parts they had back in the day,” Miller says, adding that he started out building pedals from kits, but is expanding his savvy to build from scratch, a part-time job that Miller is striving for eventually.

It’s similar to home-brewing beer. Most folks buy a kit with the necessary ingredients included. It’s easy to follow the recipe, but there’s no nuance or personality. That only satisfies a craftsperson for so long before he or she wants more control over flavor—or tone. Plus, it’s thought of as uncouth to take someone else’s “recipe” for a pedal and sell it.

Nearly three decades in, Clayton has mixed feelings about pedal building’s accessibility because of the Internet. He offers a counterpoint: “It’s frustrating, because people think DIY is better, but I think it’s worse,” he says. “A hand-built pedal is usually going to be worse than a machine-built pedal, because every solder joint is different.

“I feel like with DIY-ers, there’s a reverence,” he continues. “I don’t share that same opinion; I wish I had more machines. Yeah, eventually, you get a little jaded, but every day, I sit around and think about [pedals and electronics]. It’s what I love.”

“It’s all trial and error for the most part,” says Brian Cline, guitarist in local band Old Port & the Religious Enforcers. Cline doesn’t build to sell; he’s doing it for himself and a few lucky friends. “The more I build, the more I understand how it all works. And, eventually, I’d like to design my own pedals.”

Cline is unique to the DIY pedal builders whom I spoke with. He’s more interested in the search, rather than finding the perfect tone. “I’m just a seeker; some guys will spend years looking for a particular sound,” he says. “I’m mostly playing around and figuring out what I want. I believe that writing [songs] from the standpoint of not knowing everything is best, because it’s always new and exciting. Pedal building is the same.”