The surprising unknown history of the NRA

For nearly a century after its founding in 1871, the National Rifle Association was among America’s foremost pro-gun-control organizations. It was not until 1977 that the NRA Americans know today emerged—after libertarians who thought owning a gun was the epitome of freedom emerged after staging a hostile leadership coup and fomented widespread distrust against government, if not armed insurrection.

In the years since, the organization that once encouraged better markmanship and reasonable gun-control laws has given way to an advocacy organization and political force that saw more guns as the answer to society’s worst violence, whether arming commercial-airline pilots after 9/11 or teachers after the Newtown massacre, while opposing new restrictions on gun usage.

It is hard to believe, but the NRA was committed to gun-control laws for most of the 20th century—helping, until the 1980s, to write most of the federal laws restricting gun use.

“Historically, the leadership of the NRA was more open-minded about gun control than someone familiar with the modern NRA might imagine,” writes Adam Winkler, a Second Amendment scholar at the UCLA School of Law, in his 2011 book, Gunfight: The Battle Over the Right to Bear Arms in America. “The Second Amendment was not nearly as central to the NRA’s identity for most of the organization’s history.”

Once Upon a Time …
The NRA was founded in 1871 by two Yankee Civil War veterans, including an ex-New York Times reporter, who felt that the war had dragged on because more urban Northerners could not shoot as well as rural Southerners. The NRA’s motto and focus was not fighting for constitutional rights to own and use guns, but “Firearms Safety Education, Marksmanship Training, Shooting for Recreation,” which was displayed in its national headquarters.

The NRA’s first president was a Northern Army general, Ambrose Burnside. He was chosen to reflect this civilian-militia mission, as envisioned in the Second Amendment, which reads: “A well-regulated militia being necessary to the security of a free state, the right of the people to keep and bear arms shall not be infringed.”

The understanding of the amendment at the time focused on having a prepared citizenry to assist in domestic military matters, such as repelling raids on federal arsenals like 1786’s Shays’ Rebellion in Massachusetts or the British burning of Washington in the War of 1812. Its focus was not asserting individual gun rights, as today, but a ready citizenry prepared by target shooting. The NRA accepted $25,000 ($500,000 today) from New York State to buy a firing range. For decades, the U.S. military gave surplus guns to the NRA and sponsored shooting contests.

In the 1920s and 1930s, the NRA’s leaders helped write and lobby for the first federal gun-control laws—the very kinds of laws that the modern NRA labels as the height of tyranny. The 18th Amendment, outlawing alcohol, became law in 1920 and was soon followed by the emergence of big-city gangsters who outgunned the police by killing rivals with sawed-off shotguns and machine guns—today called automatic weapons.

In the early 1920s, the National Revolver Association—the NRA’s handgun-training counterpart—proposed model legislation for states that included requiring a permit to carry a concealed weapon, adding five years to a prison sentence if a gun was used in a crime, and banning noncitizens from buying a handgun. It also proposed that gun dealers turn over sales records to police and a one-day waiting period between buying a gun and getting it—two provisions that the NRA opposes today.

State gun-control laws were not controversial—they were the norm. Within a generation of the country’s founding, many states passed laws banning any citizen from carrying a concealed gun. The cowboy towns that Hollywood lionized as the “Wild West” actually required all guns be turned in to sheriffs while people were within local city limits. In 1911, New York state required handgun owners to get a permit, following an attempted assassination on New York City’s mayor. (Between 1865 and 1901, three presidents were killed by handguns: Abraham Lincoln, James Garfield and William McKinley.) But these laws were not seen as effective against the Depression’s most violent gangsters.

These federal firearms laws imposed high taxes and registration requirements on certain classes of weapons—those used in gang violence, like machine guns, sawed-off shotguns and silencers—making it all but impossible for average people to own them. Gun makers and sellers had to register with the federal government, and certain classes of people—notably convicted felons—were barred from gun ownership. The U.S. Supreme Court unanimously upheld these laws in 1939. 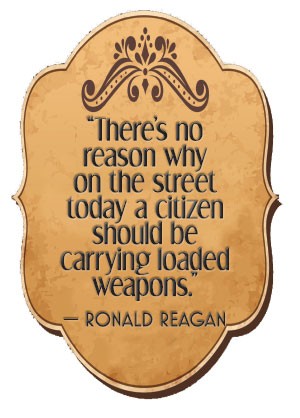 The NRA president at the time, Karl T. Frederick, a 1920 Olympic gold-medal winner for marksmanship who became a lawyer, praised the new state gun controls in Congress. “I have never believed in the general practice of carrying weapons,” he testified before the 1938 law was passed. “I do not believe in the general promiscuous toting of guns. I think it should be sharply restricted and only under licenses.”

The legal doctrine of gun rights balanced by gun controls held for nearly a half-century.

In November 1963, Lee Harvey Oswald shot and killed President John F. Kennedy with an Italian military-surplus rifle that Oswald had bought from a mail-order ad in the NRA’s American Rifleman magazine. In congressional hearings that soon followed, NRA Executive Vice President Frankin Orth supported a ban in mail-order sales, saying, “We do think that any sane American, who calls himself an American, can object to placing into this bill the instrument which killed the president of the United States.”

But no new federal gun-control laws came until 1968. The assassinations of civil rights leader Rev. Martin Luther King Jr. and Sen. Robert F. Kennedy were the tipping point, coming after several summers of race-related riots in American cities. The nation’s white political elite feared that violence was too prevalent and there were too many people—especially urban black nationalists—with access to guns. In May 1967, two dozen Black Panther Party members walked into the California Statehouse carrying rifles to protest a gun-control bill, prompting then-Gov. Ronald Reagan to comment, “There’s no reason why on the street today a citizen should be carrying loaded weapons.”

The Gun Control Act of 1968 reauthorized and deepened the FDR-era gun-control laws. It added a minimum age for gun buyers, required that guns have serial numbers and expanded people barred from owning guns from felons to also include the mentally ill and drug addicts. Only federally licensed dealers and collectors could ship guns over state lines. People buying certain kinds of bullets had to show I.D. But the most stringent proposals—a national registry of all guns (which some states had in colonial times) and mandatory licenses for all gun carriers—were not in the act. The NRA blocked these measures. Still, the NRA’s Orth told American Rifleman magazine that while part of the law “appears unduly restrictive, the measure as a whole appears to be one that the sportsmen of America can live with.”

The Paranoid Libertarians’ Hostile Takeover
Perhaps the sportsmen of America could abide by the new law, but within the NRA’s broad membership were key factions that resented the new federal law. Thoughout the 1960s, there were a few articles in American Rifleman saying the NRA was waiting for the U.S. Supreme Court to declare that the Second Amendment included the right to own a gun, Joan Burbick recounts in her 2006 book, Gun Show Nation: Gun Culture & American Democracy. But in the mid-1960s, the Black Panthers were better known than the NRA for expressing that view of the Second Amendment.

By 1968, however, Burbick notes that the NRA’s magazine’s most assertive editorials began saying that the problem was fighting crime and not guns—which we hear today. The 1968 law ordered the federal Bureau of Alcohol, Tobacco, Firearms & Explosives to enforce the new gun laws. In 1971, ATF raided the house of a lifetime NRA member who was suspected of having a large illegal-arms cache and shot and killed him.

That prompted “the ardent reactionary William Loeb,” then editor of New Hampshire’s influential Manchester Union Leader newspaper, to call the federal agents “Treasury Gestapo,” Burbick writes, even though later evidence confirmed the weapons cache. Loeb and other white libertarians with podiums started to assert that the Second Amendment protected an individual’s right to guns—like the Black Panthers. But, of course, they were seeking to keep America’s white gun owners fully armed.