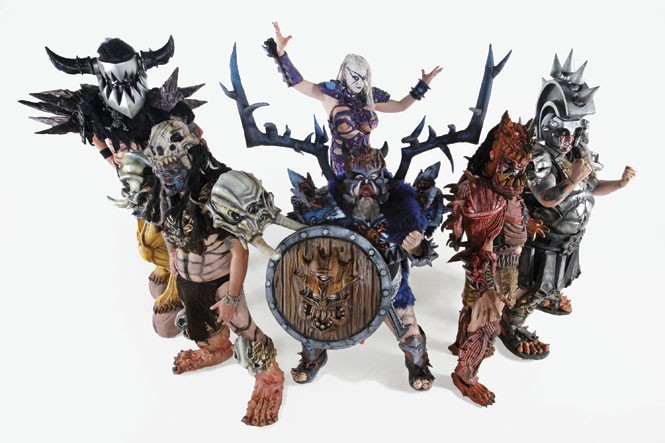 Oderus Urungus is gone. To some of you, that could mean a fungal infection has cleared. Our more discriminating readers know the sad truth. Oderus, lead singer of legendary shock-rock band Gwar, has ... disappeared. "It's bizarre," says Gwar guitarist Balsac the Jaws of Death. One night during a show, "Oderus just simply vanished in the middle of a song."

Oderus led this band of depraved Scumdogs since their humble beginnings as an interplanetary hit squad. According to the Gwar mythos, the group went rogue and was subsequently banished to Earth, where they mated with the animal population, "thereby creating the human race." This further enraged Gwar's Master, who encased them in ice in Antarctica for millions of years until music mogul Sleazy P. Martini discovered them. Gwar have since toured the world delivering death, debauchery, copious bodily fluids and heavy metal to their great-great-great-great-great-great-great grandchildren. All toward one end: escaping this wretched planet.

Oderus is already gone. No more will we gaze upon his demonic, porcine features. We will never know the wet terror of being blasted in the face with colored sugar water from his knobby, gnarly cuttlefish dong. Nevermore, quoth the Scumdog. Nevermore.

But Balsac says Gwar, like Kate Winslet's heart, will go on. In Oderus' place, "Blothar the Berserker, who is an ancient Scumdog warrior that I personally knew from outer space, suddenly appeared in the center of our stage and started singing," Balsac says. "No one really asked him to; he just started doing it. He's a rather large barbarian, so no one wanted to argue with him."

The remaining members of Gwar are "all very perplexed," Balsac says. "We want to know exactly what happened, so we decided to team up with Blothar and continue on this tour and find out the truth about the disappearance of Oderus." Also joining the band on their quest is another lead singer, Vulvatron, a Scumdog from the future who claims to have information about Oderus' whereabouts. "I'm not sure if I trust her," Balsac says. "She's far more technologically advanced than we are. And I'm scared by things I don't understand. Like women."

When warned that older brothers, the Internet and Cosmopolitan magazine report that Vulvatrons can be highly sensitive and therefore shouldn't be rubbed the wrong way, Balsac only laughs. "Yeah, I think there are entire websites devoted to the vulvas—er, Vulvatrons." Certainly, Vulvatron and Blothar have upset Gwar's balance of power. It's "all out of whack," says the giant metal-jawed guitar player. "We're at each other's throats. Everyone's trying to grab the mic and become frontman, and it's rather unsightly."

So what happens when Gwar finds Oderus? Scumdog culture would seem to demand violent satisfaction. Balsac scratches his giant metal head before responding. "I have a feeling," he surmises, "that Oderus found a way to escape Earth, which is what we've been tryin' to do for the past 30 years. But unfortunately, we don't seem to be able to get our shit together and do it."

That also baffles Balsac, who wonders how Oderus, "the most inept of us all," he says, managed to escape this island Earth. Or why he would go, since Oderus was most fond of earthly vices. "Actually, I think that on many occasions, he actually undermined our possibility of escape because he had some deep-seated love for human beings that I could never understand," Balsac says.

Well, suppose all that love in Oderus' heart led to him being raptured away by Jesus? Balsac scoffs at this notion. "I have met Jesus, and Jesus is a total loser," he says. "His dad can't stand him. He kicked him out of the house. And then [Jesus] cried and whined, and finally [God] took him back. I don't know. If Oderus is stuck with Jesus, I feel sorry for him and I want no part of it."

Another potential explanation is Oderus suffered from ennui. When City Weekly asked him about this in 2007, Oderus was characteristically flippant. Ennui is "a pasta dish, isn't it? Oh, yeah. That. Constantly. Don't break out of it," he said. "Wallow in it. Try to alleviate it with drugs, sex and violence. And rock & roll. Which is what everyone does. That all fails, so you try suicide. That's how I know I'm immortal. I can't fuckin' kill myself. I've tried a million times. My brain is so tiny that I've shot myself repeatedly, but I've missed every single time. I've throw myself in vats of sulfuric acid. I just came out with a nice and rosy complexion."

R.I.P. Dave Brockie, aka Oderus Urungus. Thanks for all the bloody fun.