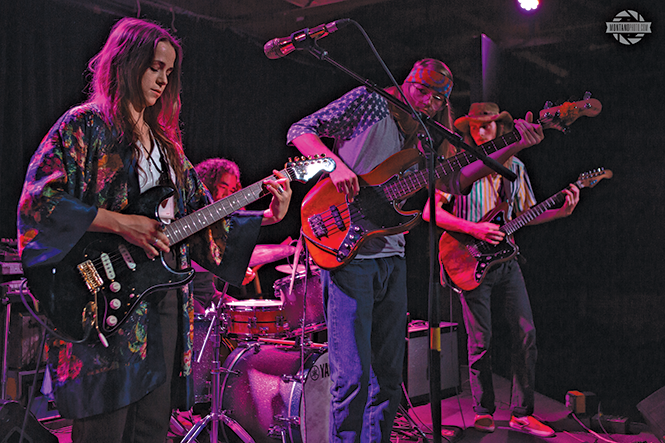 "Hail, Hail rock 'n' roll/ deliver me from the days of old," Chuck Berry once implored. The lyric belongs to a song about a kid longing to escape the drudgery of school life, for the release of "something hot" in the form of a song on the jukebox. Most folks don't rely on jukeboxes for their music-listening anymore, but from music-makers themselves to their audiences, we all still crave the release of a certain kind of noisy, rollicking music.

Enter local rockers the Sarah DeGraw Band, Green River Blues and Lovely Noughts and their upcoming showcase at The State Room, appropriately titled Hail Hail Rock n' Roll. Inspiration for the show came from both a pure desire for a night of music, but also as support for the International Society of Rock N' Roll, a local (despite the international moniker) start-up support group made up of rock lovers from all over the city, and which City Weekly profiled in March. Hail Hail will, suitably, benefit the ISRNR and its independent label by donating a portion of ticket sales to the group.

DeGraw says she's enthusiastic about what the ISRNR is hoping to achieve here. "The Utah music scene is full of great musicians but no one to see it. No record labels or, you know ... booking agencies or marketing teams. There's nothing here," she explains wearily, also expressing her frustration with the divisiveness of genres and subgenres in the local scene—a sentiment she's definitely not alone in having. "It's difficult to stay motivated when there's not really something to reach you. Time is money, and you end up spending so much time on music—you know, writing it, performing it, perfecting it, recording it. And then you don't really get much of a return." With some ties to California, the ISRNR might be able to create some reach to one of the closest hip regions to Utah, and help relieve some of the stress that comes from trying to survive as a musician in the state.

DeGraw, alongside many fellow local musician friends, can get caught up in the "gigging" lifestyle to support herself and her band's music. And that can make it hard to organize a showcase night like Hail Hail. "We've played the money-maker gigs, the private parties, those kinds of things, but I've always wanted to just put on shows," says DeGraw, whose own money-makers have included a well-paired supporting spot for '80s rockabillies Stray Cats at Red Butte this summer. "There's a lot of bands—my God there's so many bands—that gig five days a week, and that's like their job and stuff. I did that for a little bit, but I guess I just don't have it in me."

Among those bands and artists are friends of hers, like local solo folk artist Michelle Moonshine, who gets through sometimes three-hour-long performances all on her own. Busy musicians especially need something to participate in that's just about the pleasure of music, and not bound up in the stress of making money to survive. "As far as gigs in town, it's kind of important just to have an event, make it something that's out of the ordinary," DeGraw says.

It's also high time for a showcase event like this for the Sarah DeGraw Band, which is made up of a newly solid lineup. After starting solo as a teenager, frequenting the stage at Velour and just toying with the idea of being a "musician in the way that musicians are musicians," it wasn't until three years ago that DeGraw really decided to give it a go, and began working a band into the mix; "It was called the Odd Jobs, and we hit the ground running with that," she says.

A debut album came out of that group before lineup changes interfered, but that hiccup didn't stop progress. "I've kind of had my head to the ground as far as coming up with more material for the next album and singles," DeGraw says. "That's kind of the Hail Hail Rock n' Roll idea—just introducing the new band."

Not only will this night be one of pure, unadulterated rock 'n' roll for those playing and listening, but, hopefully the first of many. DeGraw wants it to pave the way for events of this kind to happen a few times a year, a frequency that would definitely serve the rock-loving community here. Amid all the business of being in a rock band these days—playing shows, writing songs and recording in a studio—DeGraw says simply, "Hail Hail is gonna be the banger."