Celebrate Halloween with this weird, obscure and freaky ear candy 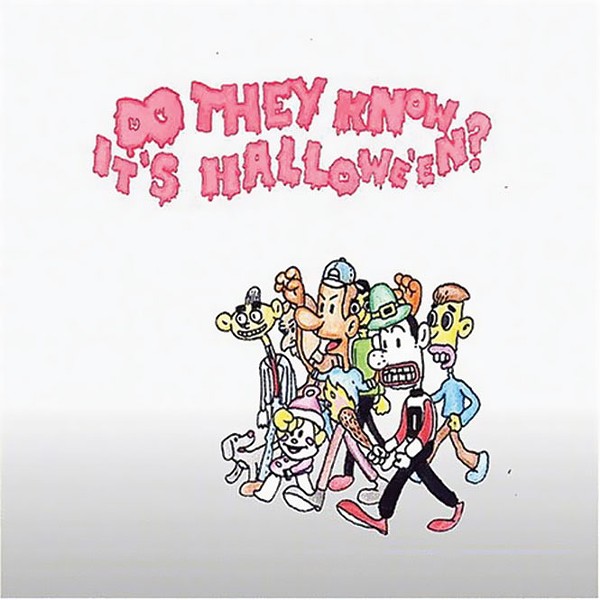 Open those pillowcases wide, readers. Here's a full-size candyba—ahem. The City Weekly powers-that-be interrupt this Halloween-playlist preface to say that no full-size treats will be placed in your linens. Fret not, however, as you won't be getting something stupid like a toothbrush or an apple. Instead, we give you the gift of music. Sweet music. Music everywhere. And since it's intangible, you'll still have room for those giant boxes of movie candy you can get at creepy old Frost Mansion.


Islands guitarist Nick Diamonds and then-Vice magazine editor Adam Gollner, inspired by Band Aid’s 1984 charity track “Do They Know It’s Christmas?,” wrote this tune to benefit UNICEF in 2005. As with Band Aid, the pair formed a supergroup (Beck, Devendra Banhart, Karen O, Peaches, David Cross, Jenny Lewis, Arcade Fire, Buck 65, Elvira and more) to perform the song. “Do They Know It’s Hallowe’en?” lacks the emotional impact of Geldof and Ure’s Xmas tune and doesn’t quite nail the goofy fun of its other inspiration, “The Monster Mash,” but it’s a fun revival of the supergroups-for-charity concept during a holiday where charity isn’t really a concern. In fact, if you take a UNICEF box instead of a trick-or-treat bag, you’re seen as kind of a chump. That’s where the NAHPI wins: They get us to start changing our minds about that.

Broadcast, Berberian Sound Studio OST
Dropping a full album into a playlist is a little weird, but when you hear it, you’ll understand. I haven’t even seen the film, which is said to be a tribute to and a new spin on Italian giallo films, which are a blend of psychological horror, gore films and murder mysteries. Those, I’ve seen. They can be disturbing in the very best way. Broadcast’s ethereal, queasy score, with its nods to Spaghetti-splatter soundtracks by Goblin and Fabio Frizzi, makes Berberian Sound Studio one of the freakiest movies I’ve never seen. Having said that, I’m hitting Amazon and buying the DVD.

Tim Curry, “Anything Can Happen on Halloween”
Taken from the 1986 HBO adaptation of Jill Murphy’s 1974 children’s novel, this song is cheese to the nth degree. Tim Curry, so terrifying as Pennywise the Clown in Stephen King’s IT and campy as Dr. Frank N. Furter in The Rocky Horror Picture Show, sings in character as the unfortunately named Grand Wizard. Looking more like a drag-queen vampire than a wizard, Curry is cursed with lines like “Something spooky’s going down-down,” “[Halloween] is better than a video” and “Has anybody seen my tambourine?” Juxtaposed with awful green-screen effects, Curry’s flaming, ultra-rouged performance is cringe-inducing and unintentionally hilarious.

Morrissey, “Jack the Ripper”
Leave it to Morrissey to make Jack the Ripper into a melodramatic homoerotic romance straight out of a True Blood subplot. This is the B-side to his 1992 single “Certain People I Know” from Your Arsenal, and it drips with characteristic Moz-drama. But the lyrics are also typically ambiguous. They could just as well be a fairly straightforward—and threatening—account of the infamous English serial killer. But it’s fun and certainly interesting to re-contextualize songs. Especially in the live video, when Morrissey introduces the track by saying, “There’s something about Whitechapel. Not much. But something.”

Type O Negative, “Halloween in Heaven”
In this driving, punk-ish fist-pumper from 2007’s Dead Again, Type O Negative frontguy Peter Steele sings of departed rockers and how their loss results in “Halloween in heaven” but it’s “Christmas in hell!” Here’s a verse: “Bonham on drums/ Entwistle on bass as guest morticians/ Bon Scott on vox/ Rhoads just for kicks/ on guitar Hendrix/ Lennon sits in with his friend George but where is Morrison?” Wanna know somethin’ creepy? One month after this album came out, Steele—known for being somewhat of a Jim Morrison sound-alike—died in his sleep.

Here Come the Mummies, “Creepin’”
Women who’ve braved the general-admission crowds at concerts, raise your hands if you’ve encountered The Creeper. Cowardly and opportunistic, he worms his way through the crowd just helpin’ himself. He knows that in such cramped conditions, he can probably cop a feel under the aegis of plausible deniability. He’s the antihero of this song by Here Come the Mummies, a brittle group of Charmin-wrapped musicians that rose from their tomb in 2000 and discovered Prince and Cameo. Find this on Carnal Carnival.

The Upsetters, “The Vampire”
Produced by Lee “Scratch” Perry, this is a happy little instrumental with a highly quotable 18-second B-movie lead-in. “Yoooou’re the witch doctor,” growls an Upsetter, “but I am the vampire!” Repeating that alone is fun, but there’s more. “I say,” answers the deeper-voiced, possibly more stoned Upsetter. “My patient needs another injection.” To which a sleepy female voice responds: “And that shall be successful.” The rest of the track is just bouncy, organ-rooted reggae. Pleasant, but not nearly as fun as lip-synching to the first part.


These dudes from Ohio were “deemed unfit to associate with Disney” and therefore banned from opening for Amon Amarth and Enslaved at the House of Blues in Orlando (located at Downtown Disney). Since Enslaved are a black-metal band, Skeletonwitch must be extra-super-ultra-scary. This song is all about an eternity of torture in hell, so maybe that’s what made Disney wet the bed. OK, maybe it has something to do with the video for this song, in which a dude is crucified by a priest on an upside-down cross. Nobody really knows. Either way, Disney sucks.

Hey, Disney. If you think Skeletonwitch is scary, try these U.K. stoner rockers on for size. This song says what you’d probably call “some seriously f’ed up poop!” And they don’t even try to hide it. But when you play something evil backward, it might say something good. So maybe you should go the extra mile and play it double-backward! Nevermind. Now I’m afraid.