Night of the Liquid Zombie: Vampire wine, zombie cocktails and other haunted libations.

At the restaurant where my wife works, they’re celebrating Halloween with a “fiendish food feast” and “creepy cocktails,” which got me to thinking about beverages that would be fun to serve at your own haunted Halloween party.

You could, of course, simply take the easy way out and stock up on Vampire wines. Again this year, the Utah DABC stores have stocked wines from Vampire Vineyards, including Cabernet Sauvignon, Pinot Noir and Merlot. Sorry, white-wine drinkers, the state didn’t order any Vampire Chardonnay, Pinot Grigio or Rosé, so you’ll have to drink wine the color of blood. Vampire Vineyards was founded in the late 1980s by a New York entertainment attorney named Michael Machat, who first bottled an Algerian Syrah under the Vampire label. Shortly after, Machat moved his operation to Italy and planted Sangiovese (Italian for the blood of Jove). In 1989, 672 bottles of Vampire Sangiovese were shipped from Europe to the Anne Rice Fan Club in New Orleans.

Next stop: Transylvania, where Vampire wines were made, and sales by 1995 had grown to 600,000 bottles, annually. During that time, Machat married U.K. rocker Lisa Dominique and, in 2006, the couple moved to Paso Robles, Calif., which was “surrounded by hills full of intricate winding caves, a perfect hideout for vampires,” according to Machat. Well, it’s also a great place for growing wine grapes. And so, today’s Vampire wines are about more than just Halloween marketing—they’re actually perfectly good, affordable wines (about $10 per bottle) for Halloween or any other time.

Vampire Merlot is blended with 8 percent Cabernet Sauvignon and 8 percent Zinfandel, the latter to give it a haunting spice note. Vampire Cabernet Sauvignon has a bit of Merlot added for softness, along with Syrah for structure. It’s a good wine for the Halloween grill or blood-red pasta dishes. The Pinot Noir is a French vin de pays, with wild strawberry notes and a hint of oak and vanilla from French oak barrels. It’s a soft, somewhat elegant Pinot that would pair well with game dishes. 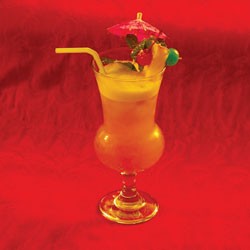 If you’re serving cocktails for Halloween, the Zombie is a good place to start. Its invention is attributed to Donn Beach of Hollywood’s Don the Beachcomber restaurant. After a visiting friend consumed three of them, he told Beach that “he’d been turned into a zombie” for the rest of his trip. Hence, the Zombie name. It’s said that Beach was very cagey about sharing his cocktail recipes, but here’s a good one for the Zombie cocktail.

For those with a haunting sweet tooth, here’s a recipe for a Halloween cocktail called Ghost in the Graveyard. In a glass, pour 2 ounces black vodka and 2 ounces creme de cacao or coffee-flavored liqueur and set aside. Next, place a scoop of vanilla ice cream in a highball glass and slowly pour the vodka mixture over the ice cream. Garnish with grated nutmeg.

And, for the kids, here’s Harry Potter’s Dragon Snot: Place a scoop of lime sherbet in a glass and top with 8 ounces of Sprite or 7-Up. Boo!