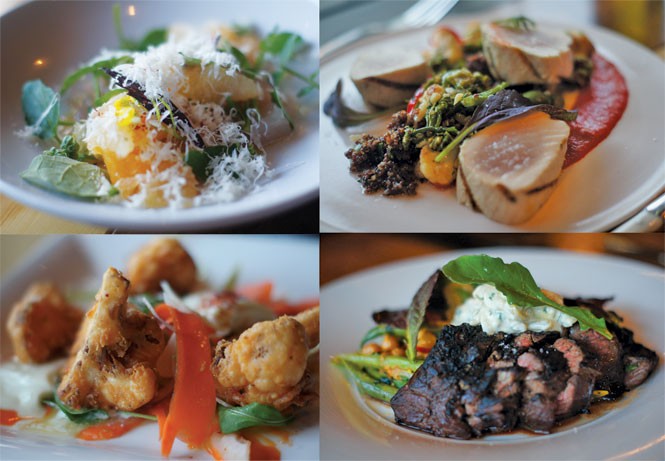 I seem to have irked at least a couple of chefs with a recent Facebook post. Such is the nature of food writing/criticism. What I said was this: "Mandatory menu items when opening a hip new restaurant include: pork belly, shishito peppers, kale and pickled veggies." I suggested that one shouldn't even think about opening an eatery without them. It was attempt at humor, but came off as snarky, which is why I should probably leave comedy to the professionals. Still, there is some truth to what I posted, and it has triggered some questions in my mind about food trends.

I mention this by way of attempting to get a handle on Handle, a terrific new addition to the Park City dining scene. All four of those food items appear on the Handle menu. There's nothing wrong with that; they populate most of the trendy restaurant menus I've seen lately. But what I can't quite figure out is why, in this era of so many immensely creative and talented chefs, are they all cooking the same things?

Maybe this is just the nature of culinary trends. I remember a time when bacon-wrapped scallops seemed to be on every restaurant menu I encountered. For a while, truffled frites were ubiquitous. And remember foam? Still, I can't quite account for so much sameness where chefs strive so hard to be unique.

It could be just a matter of economics: Customers now adore pork belly and expect it on menus. Ditto shishito peppers, apparently. If that's the case, then maybe offering those items is just a matter of catering so their clientele's sense of comfort, in the way that comforting dishes like chicken & waffles also appear on so many menus. Maybe—like the meatloaf and pot roast of years past—pork belly and shishitos are simply the comfort foods of the new millennium. If so, then I guess I have to admit that the new millennium looks a bit tastier and more interesting than the old one.

So, then, on to Handle. Chef/owner Briar Handly, who most recently served as executive chef at the award-winning Talisker on Main in Park City, has taken the old Renee's/Jean-Louis/Al Dente location in the Gateway office complex and made it his own. The space is open and airy, with lots of natural woods, a see-into kitchen, comfy bar and casual atmosphere. It's a warm, inviting space where you'd expect comforting—not precious—cuisine, and that's exactly what you get.

While not too over-the-top, Handly has mad chef skills. And so, even a simple appetizer of Hawaiian albacore crudo ($14) is more than just the standard raw fish with, say, ponzu. Instead of going for the obvious, Handle presents his crudo cubed, along with cubes and slices of ruby red grapefruit, fresh greens with a grapefruit vinaigrette and—here's the kicker—finely grated fresh horseradish on top.

A rainbow of heirloom tomatoes is served not with the predictable mozzarella or burrata, but with creamy housemade ricotta, crunchy green beans and sherry dressing ($12). Even something as seemingly straightforward as an order of barbecue ribs with chipotle sauce ($12) is elevated with the simple addition of watermelon cubes, which simultaneously serve to magnify the sweetness of the sauce and balance the smoky spiciness. More than most chefs I know, Handly is a master at juxtaposing and juggling both contrasting and complementary flavors. His dishes are deceptively simple.

Charcuterie, of course, is common on contemporary restaurant menus, and Handle offers an appetizer of melon with Creminelli coppa, peaches and basil ($12). But more interesting is the made-in-house smoked trout sausage ($12). This was a beautiful thing: smoked trout sausage with a crisp, browned casing served with gravy-like corn "pudding" and pickled summer vegetables.

Even bread service ($3) at Handle is uncommon. A bowl of fresh-baked bread—in our case rustic white bread, olive loaf and gougeres—from Park City's Red Bicycle Breadworks comes with a trio of condiments alongside: top-quality California olive oil, salted butter and seasonal mustard or marmalade (peach, on this evening). And the staff is so accommodating and friendly that they'd have no problem with someone coming in and just ordering the bread, or perhaps a meat & cheese plate, while enjoying one of the craft cocktails, a cold beer or a glass of wine from the brief but well-conceived wine list. Or, you might want to grab a seat at the kitchen counter for an up-close-and-personal view of what's cooking while you enjoy a classic cheeseburger made with American cheese, with french fries and Utah fry sauce on the side ($18).

At Handle, the sharing of dishes is encouraged, rather than frowned upon; I'd suggest sharing the entrees, which tend to be generously portioned. The grilled albacore ($34), for example, was a trio of large medallions cooked just until pink in the center, accompanied by a vibrant red pepper sauce, brocollini, quinoa and olives drizzled with lemon. The hanger steak ($38) was cooked perfectly medium-rare, cut on the bias and served with a marinated bean salad (I love those garbanzos!), Jordanelle watercress and an irresistible caramelized onion dip.

If I have criticisms of Handle, they're small ones. I always think it's a little pretentious not to put salt and pepper on tables for customers. And, at Handle, appetizers like the albacore crudo are delivered with no serving apparatus; a spoon would come in handy, since none are included with the regular table setting. But these are minor matters that are easily remedied. What's not so easy is serving modern comfort food with a real flair and keeping it interesting—which Handle does in spades.