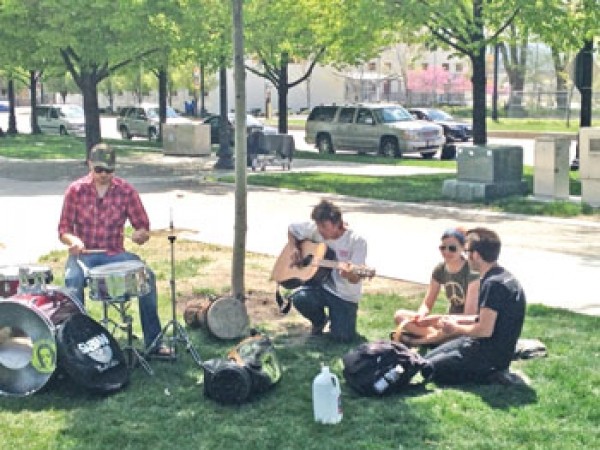 It’s an 80-degree day in downtown Salt Lake City’s Pioneer Park at 300 South and 300 West, and people from the nearby homeless shelter are enjoying the weather. Some are spread out under trees, others are basking in the sun, but a man is also shouting threats at a woman in a mix of English and Spanish before stomping away. An ambulance swings by later and carries another man out of the park on a stretcher.

The scene shifts, however, as two groups of volunteers arrive in the park offering services that Salt Lake’s street denizens miss out on: friendship, music and an afternoon that’s more like a picnic in the park than just another day living outside.

The volunteers did have a few secret weapons. Tom Bennett, a volunteer with the Midvale Boys & Girls Club and head of the Salt Lake City Beneficial Humanism Movement, brought a guitar, harmonica and drum. Travis Hysell, of anti-hunger advocacy group The Legacy Initiative, and his volunteers came armed with backpacks and an arsenal of bean & cheese burritos that they delivered straight to the homeless so they would have an opportunity to get to know them one on one.

“In Salt Lake City, [the homeless] are very well taken care of,” Bennett says. “A homeless guy I met last week told me that if you go hungry in Utah you are a complete idiot.” The Beneficial Humanism group brings soup and bread to the homeless and also eats it with them. “We like to bridge the gap and share our food together,” he says.

The group’s mission to get to know the homeless on a personal level fills a void in homeless services left by the departure of the Occupy SLC movement from the park.

Bennett says the Beneficial Humanism Movement is for activists who are ready to help in any number of causes. The group operates on a platform of being politics-, violence- and religion-free. The group has previously rallied for marriage equality alongside LGBT activists at the Utah Capitol, helped out the eco-activists of Peaceful Uprising, and set up a number of community gardens throughout the city.

Bennett says the main distinction of his group is focused on doing good work, not just talking about it. “We don’t have meetings; we talk about things while we work and get things done,” Bennett says, adding that organizing is more or less left to Facebook posts and talking while working on other projects. “A lot of activist groups talk more than they act.”

Bennett says his group’s weekly Sunday “Soup in the Streets” event, when members break bread with the homeless and hang out, is now morphing into “Music for the Huddled Masses”—a jab at the Twilight Concert Series, which packs the park with people paying for concerts. Bennett instead brings a small band to jam and play music for the homeless in the park.

On a recent Sunday, Bennett’s group drew some curious onlookers. A girl came up to Bennett and gave him some guitar strings in thanks for the music. A young Latino in a basketball jersey and fedora stopped suddenly and said, “Give me a beat!” The drummer gave him a quick, toe-tapping rhythm, and the man thanked him and walked on.

Bennett says the music has had an interesting effect in the park. He once saw two men get into a brief fight, but they quickly came over and apologized to Bennett and his volunteers.

“I think we’re starting to change the culture of the park,” Bennett says.

Bennett says his group is “no profit” instead of nonprofit. They don’t use money for anything, and all their food and supplies have been donated. He says they especially prosper by networking with like-minded activists. On a recent Sunday, they collaborated with The Legacy Initiative, an American Fork-based nonprofit that delivers goods and food to the homeless on the street so they can establish personal relationships with those in need.

“Our view is that it’s a little bit degrading to stand in line for a handout,” The Legacy Initiative’s Hysell says. “We fill our backpacks with burritos and bottles of water and we go out to the people.”

Hysell’s group uses donations to prepare between 600 and 1,000 burritos that they deliver once a month to the homeless, sometimes bringing other goods like hygiene kits, warm clothes or blankets, depending on the season. By getting volunteers to meet one on one with the homeless, he says, volunteers better learn their individual needs and shed preconceived notions about homelessness.

“It’s really easy for people to judge, but when you get out and interact with people and hear their stories, it removes that element,” Hysell says.

Legacy Initiative member and public-relations spokesman Steve Throndsen says the group stands out for feeding the hungry with no strings attached, and doesn’t try to force any religious message on the homeless.

“This is nonreligious, we’re not out here preaching, trying to say God is condemning anyone for being less fortunate,” Throndsen says.

The Saturday afternoon wound down as the last of the burritos were handed out and the Beneficial Humanism folks picked up donated bread from the nearby Caputo’s Market. A homeless man, Jeff Williams, who has been “playing since he was 5 years old,” joined the Beneficial Humanism members and jammed on their drum set before borrowing the guitar and leading the band in singing “Plush” by the Stone Temple Pilots.

In the shade of a nearby tree, the Legacy Initiative’s Throndsen is deep in conversation with an elderly homeless man, jawing over topics ranging from terrorism and the bubonic plague to the Bible and the power of community. The homeless man offers some thoughts on humans rising above their baser instincts.

“The natural order of man is chaotic,” the man says. “But there is a righteous order of man that is individually obtained.”