The grandson of Hank Williams is blazing his own path 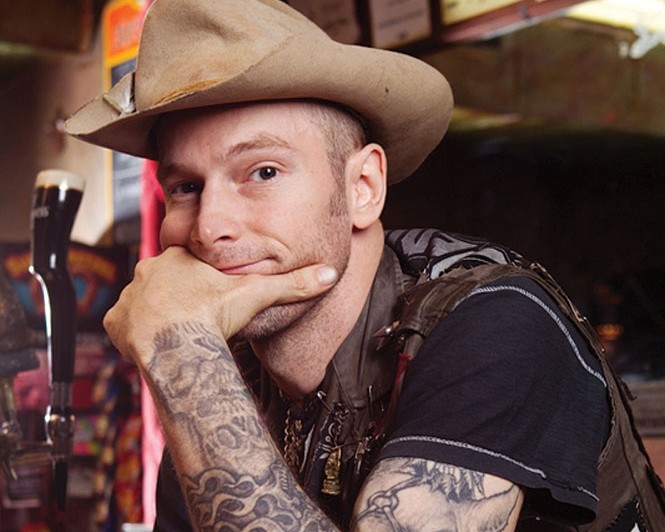 "Every Hank Williams has naturally rebelled against the norm," says Hank Williams III, aka Hank 3. "Hank Williams did it with Luke the Drifter, and all his music wasn't standard ... he was playing rock & roll before rock & roll. And then Hank Jr. leaned more toward Southern rock, so that was his way of rebelling."

As the hell-raising and hell-bent grandson of Hank Sr. and the son of Bocephus, Hank 3 is well-versed in rebellion (and also bears an uncanny resemblance to his legendary hollow-cheeked granddad). But while he certainly doesn't try to bury his country roots, paying homage to that classic influence in his music—a scorching take on country he terms "hellbilly"—Hank 3 is more proud problem child than dutiful torchbearer. As he sings on "Dick in Dixie" with singular conviction, "Well, some say I'm not country, and that's just fine with me. ... 'Cause the kind of country I'm hearing nowadays is a bunch of fuckin' shit to me."

Being on the outside suits Hank 3 just fine. In his lyrics, the foul-mouthed Tennessee native is outspoken on subjects like wannabe country artists who "don't have no idea about sorrow and woe" and sinning as much as humanly possible. He's equally outspoken in interviews. On the fact that British actor Tom Hiddleston will soon play Hank Sr. in a biopic, he says, "I don't care who it is, any European tryin' to play Hank Williams is not gonna cut it. It's simple math."

As for Hank 3's rebellious streak, it runs deep. "I've always had some outsider, just different kind of thoughts or quirks or however you want to put it that just makes what I do a little different, or not as normal as what some bands do," he says.

And what Hank 3 does is throw his health at the mercy of a self-imposed heavy schedule of touring, recording and engineering his albums entirely on his own, and making every live performance an endurance-testing four-hour marathon that begins with country and ends with punk and metal. But when I mention it all must be tiring for him, he replies with a casual "It is what it is."

The latest fruit of his labors is the two-headed release of 2013's Brothers of the 4x4 and A Fiendish Threat, both throwback albums in their own way that show that Hank 3 is as skilled in turning old-school punk on its ear as he is putting his own demented twist on country. Brothers of the 4x4 "definitely has the roots of country music in it," he says. "I try to keep a fiddle, banjo, steel guitar, mandolin and upright bass and acoustic guitar involved on all the record opposed to just having an electric guitar and over-produced vocals." But on A Fiendish Threat—a reference to The Misfits and Minor Threat—he wanted to give nods to the bands "that I respected and grew up with, and bands that taught me how to play my instruments," and did so by combining raw punk energy and rhythms with country's standup bass and acoustic guitars.

The two albums, as well as a mysterious side project he has in the works that "any normal Hank 3 fan would not understand," prove that Hank 3 isn't the kind of musician who answers to anyone or anything—even his own family's musical tradition.