Hank Louis of the U of U's Design Build Bluff 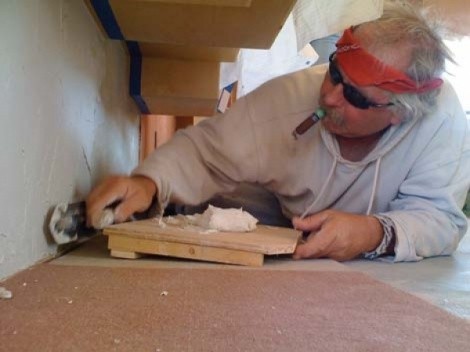 Hank Louis is founder and instructor of the University of Utah’s Design Build Bluff program, which builds eco-housing for low-income Navajo families.

What’s the program’s foundation?
It was inspired by Samual Mockbee’s The Rural Studio at Auburn University in the mid-’90s. He was taking architecture students to impoverished areas to do build/design. I went to see him, brought him here to speak, and this generated interest at the U.

Our mission is to use an architect’s expertise to provide someone a low-cost shelter. We started small by building bandstands in Park City, then a tree house at Bend-in-the-River. Our first house was the Kunga House, for a Tibetan family in Salt Lake City. Later, we began building Bluff.

Why build in Bluff?
For most, it’s shocking how the Navajo are living, without septic systems or water. We introduce the students to a Third World country—as for culture and living conditions—right on their back porch. The biggest way students are transformed is gaining compassion for these people.

What are the clients’ needs?
Some have lingering Navajo traditional aspects in their lives, so they request sensitivity toward that. Sometimes they’re hilarious things, because we think them commonplace: Dora Benali said, above all, she needed shelves in her bathroom.

How is each project unique?
It’s a product of the students’ ideas. Beyond distinct design for each family—form, mass, size—students experiment with alternative building materials, looking for something never used before.

For form, students take the idea of the old traditional hogan, with no windows and an open ceiling, and reconfigure it to meet the lifestyle of modern Navajo people.

Having no utilities forces us to use sustainable practices like passive solar and vernacular design. We use earth and recycled materials as much as possible. Most houses are built for less than $30,000.

What’s slated for 2010?
A house for a woman named Janet, the runner-up last year. She is a sculptor and a potter, so we are making her a studio, which will be interesting. Janet has six kids. We rarely work with an [nuclear] family unit. It’s almost always a single mother.

What’s wrong with typical architecture?
We’re slowly headed in the right direction. The typical, slam-it-up balloon frame is inefficient with lots of imbedded energy. We haven’t been paying any attention to the ideas that we lived by for centuries, creating comfortable space using nature, the sun and the breeze. We threw away our knowledge when electricity became cheap.