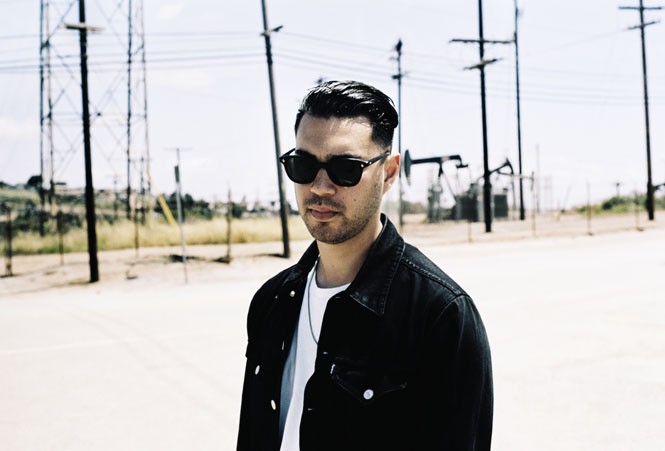 There has long been more to music than music. As long as music-related illustrations, photography and film will be distributable en masse, visual music culture will remain intertwined with the aural. Images shape sound, and vice versa. It's why Taylor Swift can comfortably reference assorted musical genres/eras in her "Shake It Off" music video using fashion alone, and why Abbey Road and mop-tops are as fundamental to Beatles lore as "Come Together" and "Let It Be."

It's also why the feelings of menace and retro-tinted cool coursing through Hanni El Khatib's devilish garage rock & roll easily feel greater once experienced alongside his record art. As he once told Interview magazine, "I want to give you the sensation of bringing you back into the past—but minus the kitsch."

The covers of Will the Guns Come Out—the 2011 debut from the Los Angeles-based singer/guitarist/bandleader—and his early EPs alike all feature vintage-flavored photos of car wrecks. 2013's Head in the Dirt spotlights a leather jacket's flash-tattoo-style back patch depicting the Grim Reaper clutching a brunette in a romantic embrace. Most recently, January's Moonlight shows a snake wrapped around someone's arm, with a hand holding the irate reptile at a distance.

"In a broad sense, [the cover's about] the idea of being within an arm's length of danger or in some sort of situation where you need to protect yourself and seemingly having it in control—but not really," says El Khatib, 33, who cooked up the image's concept while Nathan Cabrera executed the idea.

In interview after interview, El Khatib has reiterated his love for the image and its importance to his career and output. As a kid who was into music, he had several visual favorites: the Nervous Records logo and the Wu-Tang sigil, and cover artists like Hipgnosis, Roger Dean and Peter Saville. In his hometown of San Francisco, El Khatib attended the Academy of Art for two years, specializing in art direction and graphic design. He's also worked as a creative director for streetwear brand HUF, and designed artwork for other musicians, like indie rocker Her Space Holiday and DJ friends.

Nowadays, El Khatib doesn't just release music as part of Los Angeles label Innovative Leisure; he's also a co-owner and its art director. "I'm more inherently a visual artist than a musician, per se," he says. "I just happen to make music as well. I tend to be more visual in that sense with everything that I do."

El Khatib mentions still doing projects with brands outside of his music career. Fittingly, a brand was crucial to his move to professional musician. In 2011, El Khatib was just getting going with his career, playing to tiny bar crowds, when Nike asked to use his song "I Got a Thing" in a commercial.

"The choice was, say 'yes' to that, and then you can quit your job and go tour," El Khatib says. "That was the clear-cut decision."

Around the same time, he was also asked to join Florence + the Machine on tour—a chance to work in large venues—which was an exciting but financially risky prospect he wouldn't have taken if he hadn't had the Nike money in the bag.

In those days, El Khatib revealed an affection for squealing high-energy rock shaded by 1950s and '60s blues and garage rock—he crooned, but creepily—but Moonlight pushes him forward a couple of decades. "It wasn't [inspired by] anything other than the idea of psychedelia," he says. "I really wanted it to be dreamy, and trippy and headphone music."

The results are guitar riffs and blasts of fuzz that ring bright and big, with the danger chic never dissipating. But even though El Khatib has a knack for guitar and caught some unmissable music-related opportunities, why is he primarily a musician now rather than a visual artist, given his natural inclinations?

"I've always used art as a trade. It's a profession," he says. "I wanted to be a graphic designer, but in practice, I'd be working for people or brands, selling some sort of a product. Now, the product I'm trying to sell or do work for is my own—music that we love and bands that we love [at Innovative Leisure], and it's not like I have to answer to anybody, which is cool."