Happy Anniversary Brewery, Got You On My Mind 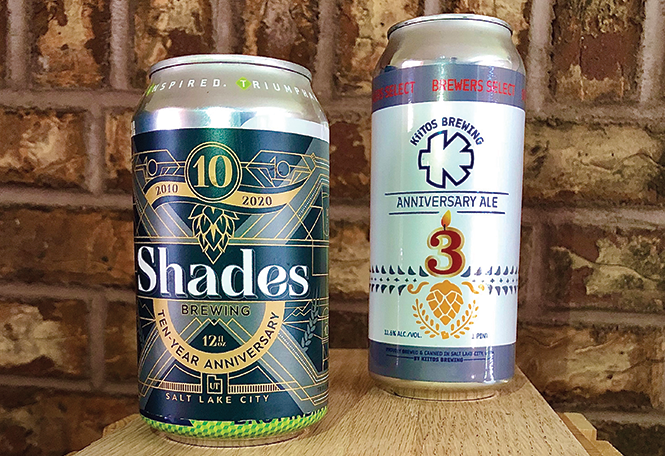 This week, we congratulate two of Utah's finest beer-makers for making it another trip around the sun, during one of the craziest years on record. And, in perfect Utah fashion, Shades and Kiitos brewing companies didn't shy away from extreme beers as part of their celebration. If full flavor is what you seek, look no further than these heavy hitters.

Kiitos 3rd Anniversary Ale: This beer is a blend of four different barrel aged Kiitos ales. It starts with 20% Barleywine, aged in Wyoming Whiskey Barrels for 25 months, then includes 20% Imperial Red Ale (aged for 13 months in High West Whiskey Barrels), 20% Imperial Red Ale (aged for 5 months in High West Whiskey Barrels) and 40% Pastry Style Stout (aged 7 months in Sugar House Whiskey barrels). The viscous liquid is deep mahogany in color, with some orange highlights. The head, a dense, foamy taupe cap, builds and dies. First and foremost, the barrel-aged aspect of the aroma is front and center—vanilla and a slight oaky, earthy tobacco. After consideration and a swirl, one might also take in coffee, dark chocolate, fruit cake, coconut and a slight spiciness. Warm booze sends a tingle up the nostrils. In the middle of it all is a very subtle pine resin perfume concoction.

Much of the aroma carries into the palate. The coffee, chocolate and fruit cake are easiest to pick out. New flavors not in the nose are here too, such as rich molasses and fleeting notes of caramel. Delving further into the structure, there's also a soft anise/licorice note. Though a massive sweetness sticks around through mid-palate, it leaves after a while, providing a drying, tannic, oaky finish. The finish itself is long, and certainly feels like the smooth burn of brandy, and the vanilla of bourbon barrels.

Overall: This 11.6 percent ale deserves contemplation, as Kiitos has created a beer that is greater than the sum of its parts. Each sip brings something new with every degree of temperature change as you whittle your way through it.

Shades Ten Year Anniversary: This beer features 10 pounds of 10 different hops, per barrel, consisting of Amarillo, Citra, Cascade, Comet, Centennial, Mosaic, Motueka, Galaxy, El Dorado and Huell Melon. This IPA pours a semi-clear yet slightly cloudy peach color. A sizable bubbly soapy lather of a head caps the top. The aroma, boastful at first, is not necessarily a harbinger of things to come. It's citrusy, yet not as fruity as other IPAs, though grapefruit comes in strong. In general, there is a stronger emphasis on dried apricot, fig, peach and pith.

In the mouth, it is a complex combination of plump and juicy citrus, plus smooth and velvety malts that coat the mouth like a soft pillow. Then, all of a sudden, it's like someone stuffed said pillow full of grapefruits, and it knocks you on your ass. The salad of hops creates a resinous pine smack that leaves the palate reeling, like you're chewing on nugs. The result feels like a hoppy barleywine at times. The carbonation is gentle, and the fruity tones consist of apricot, grapefruit and big citrus pith on the back end. The sweet finish features a strong herbal, resiny and bitter linger.

Overall: I drank a whole 16-ounce can of this 10 percent beer by myself, and it left me with that beer smirk that my wife really hates. Not designed for the Hazy lovers out there.

I recommend buying at least three of Kiitos' 3rd Anniversary—one for now, and the others for aging. Shades' Triple IPA is great now, probably even better towards the end of October as all of those hops mellow a bit. As always, cheers!