Sequel is a big pile of crazy 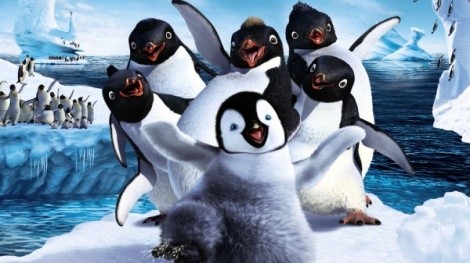 Late in the new animated sequel Happy Feet Two, a penguin chick named Erik (Ava Acres)—previously a timid and quiet little thing—bursts into operatic voice at a moment when hope seems dim. “Nothing makes sense in this world,” belts out young Erik. “It’s all a big pile of crazy.” And that, friends, is about as pithy a summation as one could hope for.

I suppose it’s my own fault for wanting animated features to step up their game and move beyond a decade of variations on “be true to yourself” themes mixed with random pop-culture gags. The original 2006 Happy Feet was already a step in that direction; steeped though it was in the familiar misfit’s-journey premise, it also incorporated live-action actors to surreal effect, and presented a hard-to-miss allegory for tolerance of “alternative lifestyles” that inspired outrage from the likes of Glenn Beck and Michael Medved. Happy Feet Two is, in its way, utterly distinctive from the great mass of contemporary animated fare—yet it’s also far too frantic and muddled to work as simple storytelling.

The emperor-penguin colony from the first film has been changed forever after coming to terms with the dancing oddball Mumble (Elijah Wood) and embracing dancing to accompany its singing ways. But it’s still a hard world for those who are a little different, including the aforementioned Erik—who happens to be the son of Mumble and Gloria (pop singer Pink, replacing the late Brittany Murphy). When Erik runs away with two friends, Mumble heads off to find them—just before a calving chunk of Antarctic ice leads to a catastrophe that could seal the colony off from the rest of the world, and its only food source.

Not surprisingly, Happy Feet Two finds a way to bring Mumble’s old traveling companion Ramon back into the story, since nothing that was ever wild and bizarre found restraint in a Robin Williams performance. Director George Miller and his screenwriting team also introduce a flying “penguin” named Sven (Hank Azaria), a surly elephant seal named Bryan (Richard Carter), a marauding flock of skua and—in a subplot that exists almost entirely independently of the penguins—a pair of krill named Will (Brad Pitt) and Bill (Matt Damon), who have separated from their swarm and are trying to find a new direction and purpose in life. (Note: That last part was not a joke.)

You could call such an approach “ambitious,” and in fairness to Miller—the Mad Max auteur who similarly went bananas with a sequel to a popular kid-flick in Babe: Pig in the City—it’s at least somewhat admirable that he refuses to play it safe. He once again brings real humans into his CGI world and unapologetically aims for a message about how even the smallest individual can play a role in fending off the effects of potential disasters like climate change. Aside from Williams’ riffing, Miller again generally sidesteps nudging jokes that come from outside his world, notwithstanding one suggestion that the krill voiced by Pitt “could adopt.”

But it’s tough to cut Happy Feet Two too much slack, because the thing is such a colossal mess. There’s simply no focus to the narrative or to the tone, as Miller bounces between big musical production numbers—the penguins perform “Under Pressure” while working on their climactic escape plan—and high-energy chases, frequently interrupted by awkward attempts at comic relief. There are so many different characters with so many different individual journeys and back stories that it starts to feel like a 1970s disaster movie in animated form. Mumble was at least clearly the center of Happy Feet, while you could just as easily make the case that Will and Bill are the main characters here, or Erik, or even Sven.

Weirdness isn’t, of course, an automatic deal-breaker when it comes to animated features; Rango already proved that this year. And I can honestly say that the experience of watching this movie won’t vanish into an innocuous puff of “So, that happened” like so many other cookie-cutter cartoons. But nothing in Happy Feet Two coheres in a meaningful way. It’s all a big pile of crazy, with no one scooping up after it.