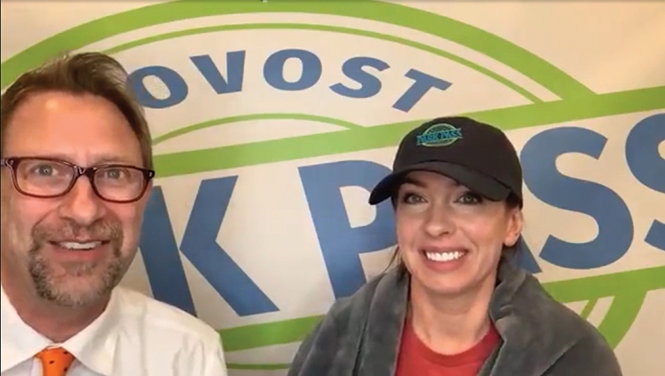 As much as the world has changed for everyone, you might think it would change less for someone whose livelihood involved creating content for a YouTube channel. But when your focus is Disney theme parks—as it is for Chris and Amanda Provost, who operate the Utah-based Provost Park Pass channel—a drastic change is required.

That focus came very close to stranding them halfway around the world, in the heart of the original coronavirus outbreak. Late last year, the Provosts planned a trip around the world with their 3-year-old son, Miles, to visit all twelve Disney theme parks over a span of about five weeks, which they would chronicle for Provost Park Pass. Originally planned to begin in mid-January, it was postponed just a couple of weeks, eventually beginning on Jan. 25.

"Our original plan was Florida to Paris, then to Hong Kong, then to Shanghai," Chris Provost says. "We got a text on the 25th about Hong Kong closing. We didn't understand the magnitude of the situation. We kept thinking, 'Maybe it'll open in a week or two.' ... If that delay hadn't happened, we would have been stuck in Hong Kong or Shanghai."

Then, while at Disneyland Paris, adjusting their tour to account for the China parks' closures with their travel agency took them in a direction that, in hindsight, Provost realizes might not have been the best choice. "They suggested coming back to Florida to go on a Disney Cruise as an alternative," he says. "We'd been in Paris for eight days, everything [about the pandemic] still seemed very foreign to us. So we flew back to Miami and got on a Disney Cruise ship. Knowing what we know now, we're thinking, 'God, it's crazy that we did this.'"

Craziness has been the new normal for most of us, and for the Provosts, the new normal has meant shifting the focus of their YouTube channel. Typically, their content would feature videos focused on visits the Disney parks, whether capturing details of their own trips or providing "secrets revealed" historical information hosted by Chris Provost (who is also familiar to Salt Lakers as the on-stage host for guest panels in the big ballroom at FanX conventions). With the parks closed, Chris and Amanda have had to pivot creatively to other Disney-adjacent content, including "secrets revealed" videos about Disney movies, and even attorneys offering opinions on the legal case against classic Disney villains.

"We're literally just doing things that we would enjoy," Provost says. "We're not necessarily thinking, 'What would make a good YouTube video?' Amanda loves food, so it made sense to do videos of trying to cook [Disney Parks recipes]. ... It's a little bit of a departure for us."

Provost acknowledges that there has been a financial impact due to a lack of new in-parks videos, though not as much as he might have expected. "It definitely has affected us," he says, "but we have a really good community. I told Amanda I thought our Patreon would probably go down, as people's discretionary income went down. I was surprised that it's actually gone up during this time. I think people are trying to support us."

While Disney Parks fans are missing their happy places, Provost notes that as the reality of the pandemic set in, it became easier to make peace with what's going on, and the realization that they could be in for a long wait before the parks are safe to visit. "We've accepted the situation," he says. "Of course we want the parks open, but we want it to be in a way that's safe. In our office, we have maps of all the parks we've traveled to. There's that sadness when you think about it, but you just want it done right. On our livestream, we asked our viewers if they would be going back as soon as the parks opened. I thought the majority would be going on Day 1, but I think about 7 out of 10 people said they would be waiting."

Provost himself acknowledges that he doesn't know for himself how quickly he or Amanda will want to get back. He wants to be careful considering the health of their son, so even if one of them goes to chronicle the re-opening, that person might self-quarantine for a while after returning. And there's an uncertainty about how much in the parks they love will have to change their operations to make them safer places, whenever they do open.

But Provost is still looking forward to getting back to Disneyland, a place and his family love and feel the absence of. "I don't know how to quantify this," he says. "It's easy to talk about specific things like rides. I just miss being there with my family, seeing things through Miles' eyes. People who love Disney understand what I'm talking about."