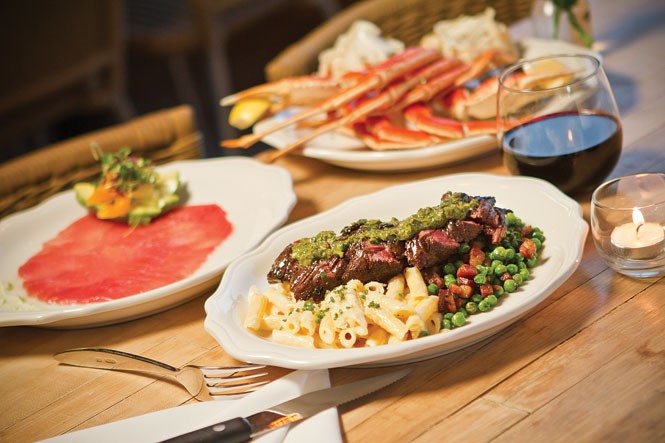 When Rino's Italian Restaurant closed in spring 2014, it felt like the end of an era. And it really was an era; Rino's had been in operation in Sugar House for nearly 30 years. But, as they say, all good things must end.

I was intrigued to hear of what would replace Rino's: a seafood & steak restaurant. For pretty much as long as I can remember, the seafood restaurant scene here has been dominated by Gastronomy, which operates the Market Street Grill and Oyster Bar restaurants in Salt Lake City and through the South Valley. For quite a while, I've been hoping that someone would come to town with a top-tier seafood eatery. And I think that has happened with the opening of Harbor Seafood & Steak Co.

From the outside, Harbor doesn't look much different than Rino's. Owners Randall Curtis and Taylor Jacobsen mostly left the exterior alone, saving the trellises and grapevines that were a trademark of the Italian eatery. Inside, however, there is no trace of Rino's. The owners gutted the place, threw out the 20-year-old cans of paprika they found in the storage room, and turned the space into a very appealing, modern-but-comfy restaurant.

There's a bar/lounge area near the entrance, with a big communal table and plush sofa seating—a spot that's sure to become a popular stop for sipping once it's discovered by locals. The rest of the restaurant is decked out in warm tans and shades of beige and brown, with plenty of wood surfaces. The sound tends to bounce off of those wood surfaces, so the dining room can get a bit noisy when it's busy.

Customers at certain tables can peek into the kitchen by peering through a glass window and watch Chef Justin Jacobsen—brother of co-owner Taylor—do his thing. So far, his thing has been darned good.

At Harbor, every effort is made to utilize local, in-season ingredients, and to fly in the freshest seafood. So, at a recent dinner, we started the evening with stuffed, battered and fried squash blossoms that came from the restaurant's garden. They're not always available on the Harbor menu, but if you see them, snap them up! Another terrific starter is a bowl of steamed clams ($14). This was a dozen and a half plump Maine clams that were steamed in white wine with shallots, garlic, basil and heirloom tomatoes. We appreciated the serving of sliced Pierre's Bakery baguette that came alongside, which we used to sop up the silky clam broth.

An equally outstanding appetizer—although the portion size might cause you to think it's an entree—is tuna carpaccio ($15), which featured a big slab of sushi-grade tuna, sliced to about 1/8-inch thickness so that it covered the entire dinner plate it was served upon. It's drizzled with a light citrus vinaigrette, and topped with an edible garnish of avocado, citrus salad and—according to the menu—candied wasabi. There wasn't any candied wasabi on our tuna, so I can't comment on that. Candied wasabi or not, one could order the carpaccio as an entree and be quite satisfied; it was more than my wife and I could finish, even splitting it. Other Harbor starters include housemade crab cakes, raw oysters on the half-shell with mignonette, steamed mussels, fried calamari and bruschetta.

As is the case at many steakhouses, sides at Harbor are offered à la carte, priced at $5 each for sea salt fries, spicy green beans, steamed veggies, mac & cheese, peas & smoked bacon, garlic mashers, etc. And unlike at many steakhouses, steak and seafood entrees at Harbor come with a choice of two side dishes and one sauce. Available sauces include béarnaise, peppercorn, creamy horseradish, citrus butter, red-pepper pesto, plain pesto and Harbor steak sauce. Extra sauce is offered at $3 per serving, and crab can be added to sides for $5.

Tempted by fish options that included wild Hawaiian ahi tuna, wild Alaskan halibut and wild Alaskan Sockeye salmon, we eventually settled upon black cod, which was excellent: lightly seared and served with subtle citrus butter, and with very good sea-salted french fries and a side of crisp, spicy green beans. My only criticism is that the two smallish pieces of cod were a bit skimpy for the $32 price tag.

I certainly had no such complaint regarding the grilled hanger steak we also ordered ($21). It was a perfectly cooked, medium-rare piece of hanger steak—about 9 inches in length—sliced into medallions, with a zippy peppercorn sauce. On the side was a generous serving of housemade macaroni & cheese (penne pasta, actually) and scrumptious peas with big chunks of crisp smoked bacon.

The service at Harbor is excellent. And, it wasn't until we'd gotten through part of our meal that we discovered our server was none other than co-owner Taylor Jacobsen. Both owners pitch in and work the floor, and Taylor mentioned that, in doing so, he can afford to pay his others servers better. That's just another reason to dock yourself at Harbor.