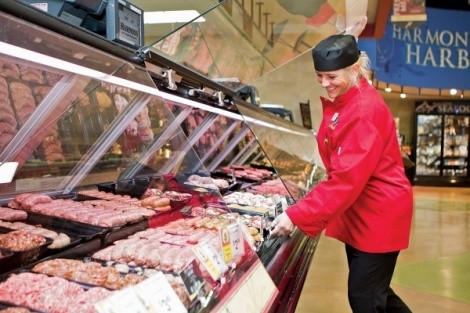 With glossy new food stores like Whole Foods and Sunflower Farmers Market—both of which I frequent regularly—it’s easy to forget about Harmons, which is truly local, and was a pioneer in the quality grocery business here in Utah. With the recent opening of the new Station Park Harmons in Farmington (200 N. Station Parkway), near the FrontRunner station, Harmon’s has served notice that it is serious about giving customers like me what I want: high-quality meats, seafood and produce without additives, a “going green” philosophy that is illustrated by practices like composting discarded fruits and vegetables, and a dedication to supporting local producers. All that, plus the essentials.

Yes, you can buy Tide and Coca-Cola at Harmons, but there is also freshly made sushi, artisan breads baked in-house, an enormous cheese selection, a deli where sandwiches and panini are made from scratch with meats and poultry cooked in house, house-cooked wood-stone pizzas and much more. If you haven’t visited a Harmons in a while, you should really check one out—particularly one of the new locations such as The District (11453 S. Parkway Plaza, South Jordan) or the aforementioned Station Park store. I’m sure Jake and Irene Harmon—the original founders of Harmons—would be very proud of what their sons and grandkids have done with the place.

The Harmons legacy dates back to 1932, when Jake and Irene opened a fruit stand at 3300 South and Main Street called The Market Spot. It would be followed by The Green Store in 1945, the site of the original Harmons and the current location of their West store (3955 W. 3500 South, West Valley City). Today, Jake and Irene’s grandsons Bob and Randy are the public face of the company and its 14 stores (with another—the old Emigration Market location—coming in August, and City Creek opening early next spring). I spent a morning and lunch with Bob and Randy at the new Farmington store chatting about the Harmons’ business philosophy, plans for the future and other things—such as how much the affable Randy enjoys driving his John Deere tractor. It was an eye-opener.

“Fresh only happens once,” Bob Harmon is fond of saying, asking rhetorically, “How can fresh-frozen be fresh?” Specifically, we were talking about the fresh fish and meats offered at Harmons. In the fish market, you won’t find piles and piles of filets; they only display as much fish as they think they can sell in a day or less. You know how at many supermarket seafood counters the fish is frozen? Not at Harmons. Hawaiian fish is ordered in the morning and FedEx-ed for delivery the next day. I’m not saying you can’t purchase frozen seafood at Harmons, because you can. There’s a whole freezer full of frozen fish filets, shrimp and the like. But when the sign says “fresh,” it’s fresh. The fresh seafood is also sustainable, much of it wild and line-caught.

As with the fish, poultry and meat are treated with respect and not pumped with additives, preservatives, nitrates and such. “Why pay for water and salt?” Bob Harmon asks, when talking about the ubiquitous practice of pumping additives into the meats and poultry sold in most supermarkets. The chicken, turkey, pork, lamb and beef sold at Harmon’s is all-natural—from Prestige All-Natural Pork and natural, hormone-free Morgan Valley lamb to natural Angus beef (prime and choice cuts only, the two highest USDA grades).

And speaking of beef, Harmon’s is the only Utah grocer to offer dry-aged beef, aged in house (at the 7th Street, Draper, Bangerter, Brickyard, St. George, District, Orem and Farmington locations). Prime Angus all-natural beef is aged for 21 days in special cases that control temperature, air circulation and humidity. Many upscale restaurants don’t even offer dry-aged beef. At Harmons, you can buy it to take home. But as Randy Harmon warns, there’s good news and bad news regarding high-quality, dry-aged beef: Once you try it, you’ll love it, but you might never be satisfied with regular beef again. That’s a chance worth taking.

Let’s talk bread. The head baker at Harmons in Farmington was sent to train in San Francisco to learn how to make breads worthy of being called “artisan.” At the Crust & Crumb stations in Harmons, you’ll find daily breads such as French baguettes, rustic roasted-garlic bread (with whole cloves of roasted garlic), sourdough, ciabatta, whole-wheat multigrain, country French bread and more. Like Harmons’ desserts, all are made with flour, yeast, real butter and other natural products—no shortening or butter substitutes allowed. The white-chocolate pecan bread is phenomenal. There are also specialty breads of the day, such as jalapeño cheddar on Mondays and rich, buttery challah on Fridays and Saturdays.

At the Farmington Harmons, there is even a courtesy bike concierge service—since the Legacy Trail runs directly behind the store and many customers bike to it—not to mention a full-on exhibition kitchen, cooking school and mezzanine dining featuring sit-down dining and comfy sofas to linger on. Harmons in Farmington recently launched Friday “date night,” where customers can enjoy a prix fixe five-course meal served with candlelight, white tablecloths and live music, cooked by executive chef J Degenhardt.

A date in a grocery store? Well, why not? After all, the new Harmons has more appeal than many of the restaurants I’ve reviewed over the years. Yes, I’m a fan of this uniquely Utah company. I’m happy at Harmons.