The Nest walks the borders of making family drama into a kind of horror story. 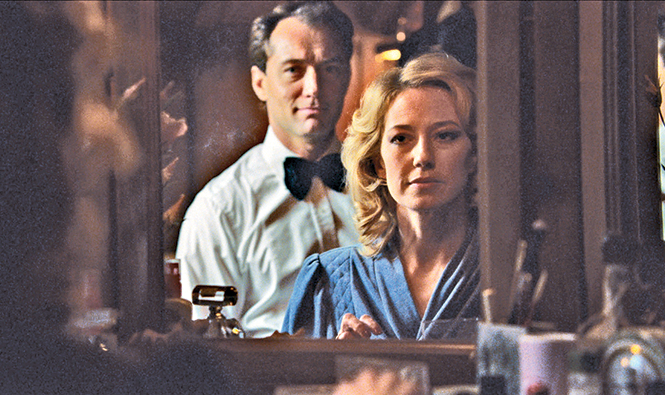 What makes a film a horror film? It's not necessarily the presence of a supernatural or fantastical component, since plenty of classic horror films have focused on earth-bound terror like implacable killers. And it's not necessarily overt or graphic violence, since the fear of what might happen can be as terrifying as fear of what actually has happened. As much as the application of the "horror" label might be an "I know it when I see it" type of situation, it can be fascinating to watch a movie play with the idea that it might apply—even if, perhaps, it technically doesn't.

Writer/director Sean Durkin applied a simmering sense of menace to his 2011 debut feature Martha Marcy May Marlene, with Elizabeth Olsen as a young woman emerging from the influence of a cult. As a character study, it was deeply psychological, but Durkin also understood that a sense of mounting dread could complicate that psychology, and the audience's experience of the characters' journey. Durkin's follow-up, The Nest, similarly tiptoes around the perimeter of what a genre aficionado might reasonably call "horror," presenting a kind of haunted-house narrative in which it's possible that the only thing haunting the house is the friction in its inhabitants' relationships.

Those inhabitants are a family recently relocated to England from New York: Rory O'Hara (Jude Law), a commodities broker looking for a fresh start with he previous employer; his wife, Allison (Carrie Coon), a horse trainer and stable manager; Samantha (Oona Roche), Allison's teen daughter from her previous relationship; and Ben (Charlie Shotwell), Rory and Allison's 10-year-old son. The slightly dilapidated Surrey estate seems to suggest a life of luxury, but as Rory's plans for a big financial score begin to come up empty, the O'Hara family becomes progressively more uneasy.

In a conventional horror film, this would be the place where the spooky manor—magnificently captured in perpetual shadow by cinematographer Mátyás Erdély—would begin manifesting strange things, bringing an alarming tangible form to the characters' anxieties. And indeed, for a little while at least, that's the direction The Nest seems to be taking. Allison hears strange noises coming from other rooms, or finds a door she's convinced she's locked inexplicably open. Ben is certain that a body that is supposed to be dead is actually breathing. Is something uncanny at work?

Or more to the point, does there need to be? It's not incidental to Durkin's story that it's set in 1986, with Rory convinced that class-bound England is about to benefit from a dose of Reagan-era deregulation. Aside from providing a soundtrack of '80s rock chestnuts—and the wonderfully old-school moment where Samantha leaps up to hit the 'record' button on her stereo when a song she likes plays on the radio—the temporal setting allows The Nest to dig around in the notion that there's a fundamentally financial component to whether a man can consider himself a man, especially regarding his role as husband and provider, and how that pressure can pull at family ties.

It's also fantastic to watch Law and Coon give two radically different but equally terrific performances as Rory and Allison wrestle with gender roles. We get just enough of a glimpse of their respective family backgrounds to understand the attitudes that inform their lives—Allison bucking against her mother's idea that a woman should let her husband worry about money; Rory desperately wanting to project a success beyond his upbringing—and why their personalities might clash over Rory's approach to his career. It's only a matter of time before Allison's strength pushes back against Rory's self-loathing.

There are moments when Durkin seems to be pushing at metaphor a bit too strenuously, particularly one involving Allison's favorite horse. Yet his choices as a director are consistently on point, building a sense of impending doom in something as simple as watching Rory talking on the phone through a window, the camera slowly pulling back in a recognition that something wrong is happening. It doesn't take an actual monster in The Nest to tell a tale about a family facing a threat to their future together; it only takes a recognition that a house doesn't have to be haunted for it no longer to feel like a home.