Local therapists use music as treatment 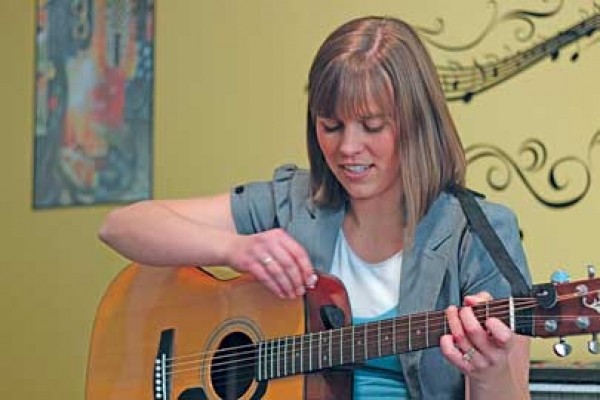 It’s that feeling you get when you hear your favorite song, or when you’re at a concert with a chest-pounding beat and you just can’t help but dance. The power of music is a mighty thing. And it’s being harnessed to treat physical and mental illnesses in schools, hospitals and clinics in Salt Lake City and nationwide.

Music therapy is designed to improve patients’ lives by addressing specific therapeutic goals—from managing pain to improving mood. A music therapist might be in a neonatal clinic, humming softly to premature infants to introduce them to auditory stimuli; in a rehabilitation facility, encouraging a patient to play a song that allows for expression of feelings about drug addiction; or in a hospital room, helping a stroke patient sing words that he can no longer speak.

Music’s ability to heal is remarkable, especially from a neurological standpoint. According to an article titled “A Neuroscientific Perspective on Music Therapy” by Stefan Koelsch, of the University of Sussex, “music listening (and music production, to an even greater extent) activates a multitude of brain structures,” allows full access to healthy parts of the brain and even facilitates the formation of new neuropathways.

Because it’s a relatively young discipline, not everyone appreciates the skill and rigorous training required to become a music therapist—from studying music theory and history to statistics and anatomy. “A lot of people just think, ‘OK, I can play an instrument and I can go to a hospital and I can sing or I can play my violin, and it really helps people feel better, therefore, that’s music therapy,’“ says Maureen Hearns, director of the Music Therapy Program at Utah State University. For this reason, Utah-based music therapists are committed to obtaining licensure.

“Licensure would protect the consumer,” Hearns says, “It would tell them that whomever is working truly is a trained music therapist who has the skills to use the music appropriately to meet [targeted] therapeutic goals.”

The American Music Therapy Association and The Certification Board for Music Therapists, as well as local task forces, are currently working to achieve licensure in the 48 states where there is none (North Dakota and Nevada implemented licensure legislation in 2011).

An example of the therapy at work: One of Voorhees’ clients, a little girl, would throw any object given to her. “That kind of hinders a lot of her learning if they’re working on art or anything where she’s required to hold things,” Voorhees says. Because the client loves music, though, Voorhees worked with her by having her play handheld instruments, and songs gave her a reason to hold the object. “She’s grown from holding onto things for one to five seconds, up to five minutes now,” Voorhees says.

Music therapy also helps in treating individuals with physical disabilities. Voorhees uses a body-beat metronome (a metronome that vibrates to a set rhythm and can be attached to a person’s clothing) in physical-therapy sessions. “One of our kids has a traumatic brain injury, so when he’s wearing that, it’s easier for him to get his body in gear,” Voorhees says. “And I’ll sometimes do music with it, too, like singing one of his favorite songs to that rhythm, and it motivates him to start to move his body.”

The scientific evidence is piling up in favor of music therapy, and more institutions are incorporating it into their therapeutic repertoires. Forever Young Foundation plans to develop a new music therapy facility, Sophie’s Place, at Primary Children’s Medical Center, according to the foundation’s website. It’s estimated to launch in February or March 2013. Sophie’s Place will include space for both individual and group therapy, as well as a recording studio.

It’s almost hard to believe that music can be such a source of healing in so many different ways, but for Voorhees, it’s almost inevitable: “Everyone is impacted by music. Everybody from every culture that has ever existed basically has found some way to use music and to make it a meaningful part of their existence,” she says. “People connect to it on an emotional level. They connect to it on a social level. I have my favorite music, things that have really impacted me, and I use it when I’m going through difficult times. It can be very helpful in the therapeutic setting because of the power it has.”