It was the first game of the 2017 season, and Romeo Johnston was so nervous he felt like he was about to vomit.

"You'll be fine," the West High School quarterback's mother, Misty, assured him. "You've got this."

Johnston and his team weren't only facing a game. In 2016, they'd gone 0-9 under new coach Justin Thompson, repeating the prior year's dismal record.

In the West High locker room at 6:45 p.m. that August night, players were silent—their faces tense, gazes inward. About the only sound was shuffling and cleats tapping on the tiled floor.

"The past ... does not ... determine the future," Thompson told his team. This, he said, was a moment to remember, "because you're about to go out and start something special."

Players knelt on the floor, holding hands in prayer. In their red-and-black uniforms, they ran out in pairs, holding hands, into the bright, late-summer sun, to face Hillcrest High.

Hillcrest kicked off, the ball arcing high over West's players then plummeting to the waiting arms of senior and wide receiver Vili Makoni.

A December 2016 City Weekly cover story titled "The Grits to Be Here" charted Thompson's dogged efforts in his first year, after being hired from Skyline by West's principal to build a team for the 2016 season.

In retrospect, part of what plagued West last season was a schism between seniors and the rest of the team that arose after only juniors, bar one senior, were elected captains. "The seniors felt they had an entitlement to being captains—they'd done their time, they deserved leadership of the team—but the team didn't see it that way," Thompson recalls. Most of our real difference-makers on the field were underclassmen."

One notable exception was senior Craig Tauteoli, who provided much of the fire for West's most powerful performance in 2016 against Viewmont for the homecoming game, which they lost 27-26. Tauteoli later was awarded a football scholarship to William Penn University.

The upside for the underclassmen from last year was that they came back empowered from their efforts the year before, despite however much the 2016 statistics had stung. Instead of the athletes playing for themselves, now it was about the team, "about the West community—the name on my chest," Johnston, No. 11, says.

One key change Thompson has been relieved to see as the 2017 preseason progressed was the difference in player turnout and commitment. Last year, 15 kids out of 70 could be relied on to turn up for practice regularly. This summer that number jumped to 50. When players didn't show up, their peers laid down the law.

"We are closer than ever to kickoff and we cannot afford not having players at practice," one sophomore texted his team when 12 players missed practice 48 hours before the first game. "If you are a part of this football team and family, be there."

These are the small things that are fueling Thompson's hopes for the future. "Group dynamics define what you will and won't tolerate," he says. "You stop tolerating behavior that leads to losing; that's when you can be successful." 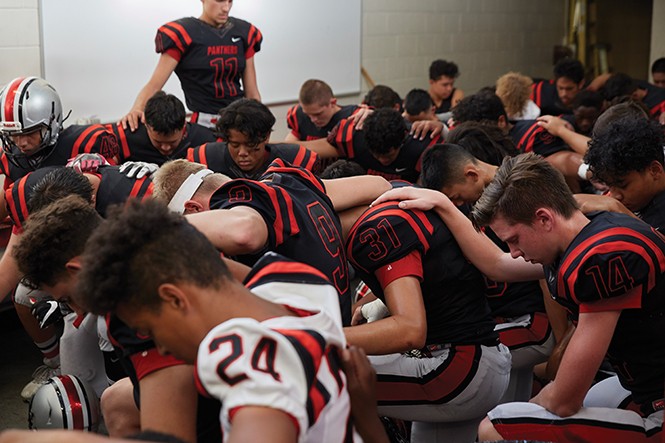 MEETING OF THE MINDS
One of Thompson's toughest decisions during the preseason was what to do about his quarterback. Johnston had struggled to find form last year. Both agreed they were having trouble trusting one another.

Thompson had started to see more consistency in No. 11's game, but when he got intense with the 17-year-old, he saw in his eyes a lack of confidence and an uneasiness he recalled from the year before. It was that vulnerability, he felt, that was leading Johnston to doubt himself when a mistake was made; to hunker down and act nervous, skittishly, rather than snap back into the game.

Then he received a call from Johnston's mother. "You need to understand his dad is probably going to die in the next couple of weeks and he can't handle you being a jerk, basically," is how Thompson remembers the conversation going.

Johnston's adoptive father, Don Johnston, died on May 8, after a battle with bladder cancer. A member of the Barons Motorcycle Club and a tireless advocate for motorcycle rights, he had coached his twin sons and the West little league football team until his sons' sophomore year. Some of the varsity players at West came up with Romeo under his father's watchful eye. Before Don Johnston died, he told his wife, "Make sure the boys finish strong. Support them," she recalls. "He said he'd be here to watch them."

After his father's death, the quarterback immersed himself into the game. Thompson watched him get better and better. Coach and quarterback, according to Johnston, became closer, understanding each other, in some sense replicating the relationship Johnston had with his father.

That alliance also reflected a deeper bond between coach and team. "We're a family again," Johnston says. The mistrust that had hindered the relationship between some of the players and Thompson before and during the 2016 season was gone. "Now there's a lot of trust. He's not the coach from Skyline; he's the coach from West High," Johnston says. 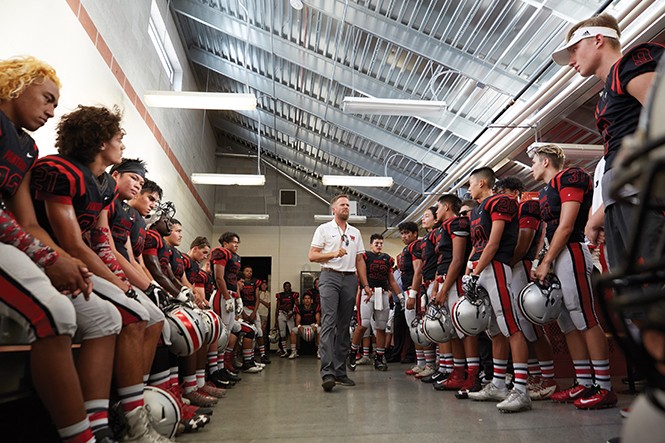 PLAYMAKERS
A week after Johnston buried his father, West finally got a taste of victory, at the 7-on-7 passing tournament, Ute Shoot, last June.

The team lost its first game of the U tourney but, "from that point forward we scored on every offensive drive for the rest of the day," Thompson marvels. And much of the credit went to Johnston. "Romeo was outstanding, on fire, throwing dozens of touchdowns, and [there was] only one interception."

West worked its way through the Ute Shoot pool, beating increasingly better teams, until it faced Skyline in the final. They won, earning a large silver trophy and celebrating for an hour before University of Utah staff asked them to leave so they could lock up.

"The things I've learned about my players here, [is that] they are survivors," Thompson says. "They have to fight with their families to get them to let them come to practice, when they're needed at home to watch their younger siblings." They struggle with poverty, discrimination, violence and tragedy. Two classmates died in a car accident last year. In early August, a teenager who had dabbled with the program was murdered in West Valley.

Many of the key underclassmen who fought so hard the previous season are now seniors, including John Abercrombie, whose athleticism and commitment made him one of Thompson's few playmakers last year. That put pressure on both coach and Abercrombie as the talent pool was stretched so thin at times because players had left for East High or other schools—or just not shown up.

"Last year, I felt the only way we could win a game was if John won the game for us," Thompson says. "Now, I've got five or six guys who could blow up and win the game."

The day before the first game of the season, Johnston pointed to four strong wide receivers and a solid offensive line. "They are just ready to start scoring. I have more courage about how the season's going to end up," he mused.

A TEARFUL EMBRACE
For those few seconds as the ball spiraled down to Makoni on the first play of the season, Thompson and his robust crew of assistant coaches held their breath. Makoni, No. 12, then caught the ball and detonated into action, flying through Hillcrest's team almost as if they weren't there to score a touchdown in the first seconds of the game. Hillcrest recovered quickly, scored and nailed the point to make it 6-7.

The Panthers didn't even blink. Johnston broke away for a long run, followed by touchdowns by Abercrombie and Faysal Aden.

At halftime, West was ahead 30-14, and Johnston was its calm center, telling his team in the locker room, "We still have two quarters. Be humble. Play the next play."

A jubilant Thompson told his team, "You have your foot on their throat right now. Keep it on."

He urged them to be gentlemen on the field, commiserating with one player over a bad facemask call, while at the same time telling him he'd be held accountable for his bad language.

West dominated the second half. "They scored more points tonight than they made in the last two years," marveled one bystander.

Makoni repeated his opening run across the field to score a touchdown, his bleached hair flickering like reeds ablaze with fireflies beneath the back rim of his helmet. In the last moments of the game, a satisfied—almost relaxed—Makoni praised their quarterback. "Our receivers believe so much in Romeo, they don't worry if he makes a mistake." He pointed to what would be the final score: 64-35. "I'm just really happy about our side finally being above the other side."

The whistle blew and the team ran onto the field in a welter of embraces and screams and body slams, the two-year losing streak finally buried. Thompson admitted to relief. The good news, he said, was the team had done "tremendous things." Better news, he continued, "is we are sloppy"; the issues were fixable and obvious to the players after watching footage of the game. The enemy they now faced was complacency. Thompson's face lit up at all the playmakers that shone that night. "It's going to be very challenging for teams to match up to us," he said.

To the side of the melee of ecstatic teenagers, all but unnoticed, Johnston and his mother Misty, both in tears, clung to each other.