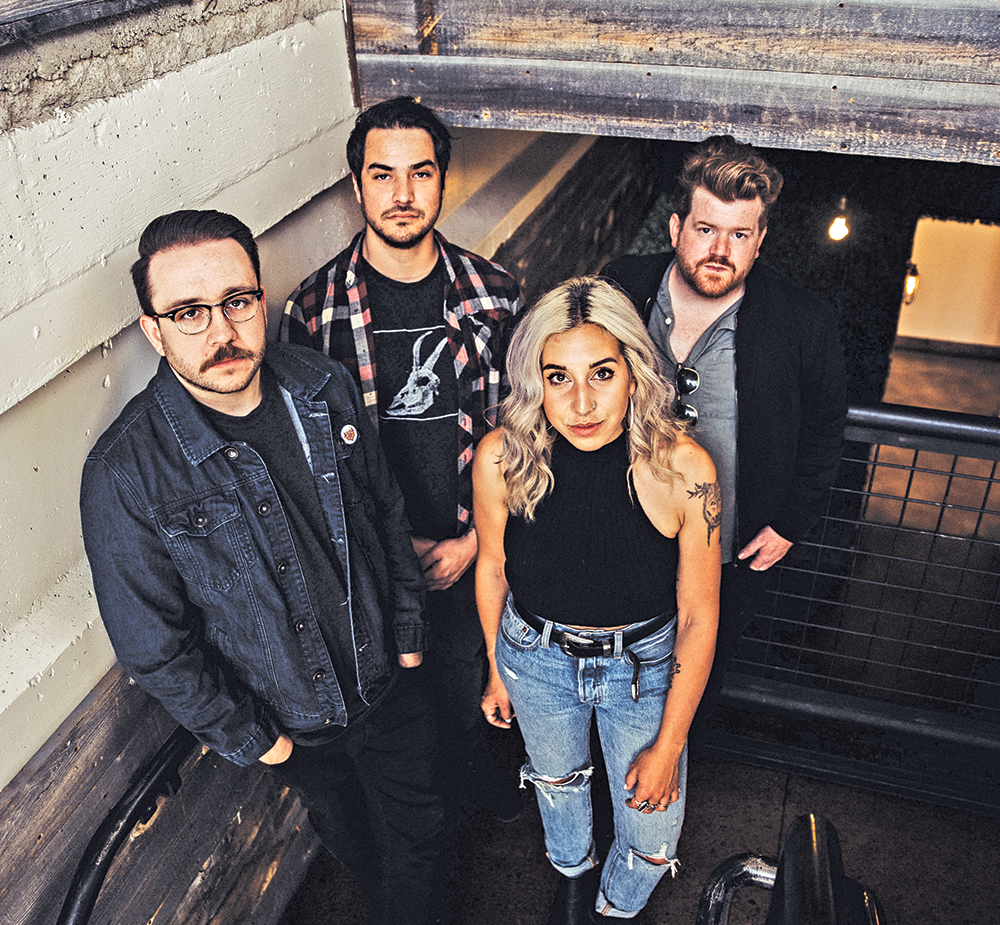 When Sadie O'Neill moved to Salt Lake City from Los Angeles in October 2017, she knew she wanted to start a band. Armed with an electric guitar handed down from her dad and a notebook full of songs she'd started writing while performing as a solo artist, the 27-year-old just didn't know how that collaboration would come about.

Then O'Neill met 31-year-old Matt Mascarenas, who currently plays with local emo rock favorites Sunsleeper and helmed past projects like Westing and Heartless Breakers. Exchanging music after a random introduction, O'Neill was impressed by Mascarenas' deep repertoire of post-hardcore and alternative rock material. "At first I wasn't sure if we had similar enough styles to form a project," O'Neill says. "He randomly sent me a track that he had produced, though, and I sent him back something I wrote over it, and we were both like, 'Damn, this is cool.'"

After pursuing so many different strains of heavy music, Mascarenas heard something unique in O'Neill's choir-trained voice, as well, quickly recruiting longtime friends Chase Griffis, 31, and Ken Vallejos, 30, to form City Ghost. "From the start, we had to pay attention to quieting things down to leave plenty of space for Sadie to sing," Mascarenas says. "In our past bands, Chase, Ken and I figured out the singing as we went along, but Sadie's got such a killer voice that we wanted to work around it and support her as much as possible."

The feeling was mutual: Within a few months of officially forming in May 2018, City Ghost entered the newly-christened studio at Archive Recordings to lay down their debut EP, When the Lights Go Out. O'Neill combines the searing narrative concision of Hop Along's Frances Quinlan with an emotive, often-mournful voice a la Erika Wennerstrom of Heartless Bastards. On "States," O'Neill sings of gardens that won't grow; on "Caves," she laments the heavy summer heat of a former lover's apartment. Bones are exhumed on "Back to the Start," while the cracks in O'Neill's voice match the cracks in the dissipated relationship outlined on "Carnival."

But it's When the Lights Go Out's closer, "Silver to Gold," that hits the hardest. "That's an important one for me," O'Neill says. "My mental state was at its lowest point when I started writing it, and it was the last song I recorded alone in L.A. before I moved to Salt Lake City. It was also the first song I played for Matt when we met—but with him producing it and the guys playing behind me, it's taken on a different emotional life. It was an awesome team effort."

O'Neill and Mascarenas chalk up the EP's sonic success to City Ghost's experience at Archive Recordings, the new studio recently opened by Mascarenas' longtime friend Wes Johnson. "We were the first band to officially record at Archive, so a lot of Wes' excitement bled into When the Lights Go Out," Mascarenas says. "City Ghost also made it a point to write songs that were straightforward, so we felt unbelievably prepared to record them. It felt really easy—almost too easy. Definitely the most relaxed studio experience I've ever had."

Adding to that vibe is beautiful cover art from Denver designer Elias Armao, along with a killer cat-themed poster for City Ghost's Dec. 4 show at The Urban Lounge, which will also feature T-shirt designs by O'Neill's mom. That sense of cozy confidence is reflected in the band's performances, too. Although City Ghost has only played 14 shows together—a handful at The Underground, The Beehive and Kilby Court, in addition to a short West Coast tour supporting Sunsleeper—O'Neill and Mascarenas both say they feel the band is already hitting its stride.

"It's honestly been way less scary performing with a band than solo," says O'Neill, who occasionally plays by herself at Piper Down and Ice Haüs, where she works part-time, along with HandleBar. "I love City Ghost because everyone's No. 1 goal is to have fun. We don't take ourselves too seriously, even if we keep setting ridiculously high goals—playing 200 shows next year, or opening for a big band. Nobody shuts them down, though. We might as well aim high, right?"

Along those lines, O'Neill and Mascarenas both say they've been working on new material for a full-length in 2019, with O'Neill sticking to her personal brand of emotional songwriting while seeking to incorporate more of the band's perspective. Their work ethics are admirable, though; when Mascarenas went on tour with Sunsleeper in November, O'Neill challenged herself to write four songs before he got back home, describing their dynamic as one of constantly trying to outdo previous efforts.

Mascarenas says that despite their differences in volume and style, that ambition is ultimately what brought him and O'Neill together. "Instead of clashing, our styles meshed really well together," Mascarenas says, prompting O'Neill to laugh and add, "Now I just have to buy a bigger amp—it turns out the one I got is too small for how heavy our sound has gotten."

After years of struggling to find her footing at home in Los Angeles, that's exactly the kind of happenstance O'Neill was looking for. You can hear it in every note of When the Lights Go Out, and next week, local music fans can experience it in person at City Ghost's biggest show to date. "I sort of blindly moved out here last year," O'Neill says, "but I intuitively knew something cool was going to happen if I did. And now, with the help of Matt, Chase and Ken, I've finally found my own voice."