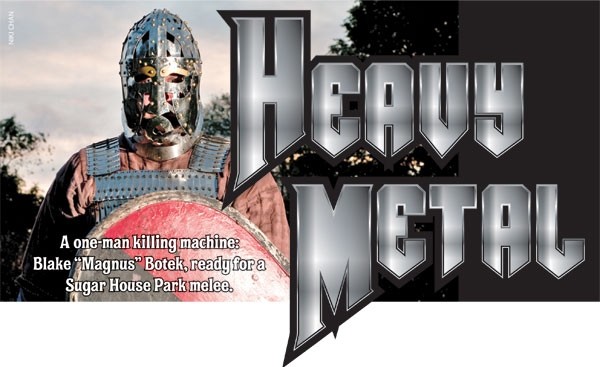 In the heart of a red rock canyon just outside of Moab, on a recent May weekend, a cavalcade of cars are making their way to a campground on a strip of land that hugs the banks of the Colorado River. The entrance to Kane Springs Campground is marked “private,” with a small painted sign taped to a fence post that reads “SCA.” Typically, you’d find off-road enthusiasts, hikers and mountain bikers flocking to this scenic locale. But on this particular weekend, the campground has been transformed from a grassy field to an ancient realm, populated by medieval knights, archers, dancers, artisans and nobles.

Instead of pop-campers and motor homes, there’s a small village of old-style tents being set up, inhabited by pot-bellied men donning chain mail and full-plate armor, pipe-smoking heralds and women and children wearing tunics and garlands while dancing to drums.

A thin strip of trees divides the village from a nearby road where onlookers in motor homes and Jeeps drive past, rolling down their windows to take a closer look at the time warp in the field. “Who are you?!” a teenage girl shouts, as she passes by. “What an appropriate, existential question,” I thought. It’s a common mistake for “mundanes” (as you and I are called) to think we are seeing a renaissance fair. But these people aren’t in a festival mood at all. Their gathering isn’t for anyone’s amusement but their own. On weekends like this, they don’t care to be intruded upon by influences from the outside world.

They’re called the Society for Creative Anachronism—historical re-enactors who believe that the lifestyles and principles that defined the Middle Ages still hold weight in today’s contemporary age. Despite modern troubles and ridicule from gawkers and hecklers, the members of this society find refuge in dedicating a few days a week to dress, act, speak and live, in their words, “as it ought to have been.”

Surrounded by the wind-carved buttes of southern Utah, this medieval enclave is officially called The Marvelous City of Ahmar, and only exists once a year as part of a weekend-long gathering dubbed Arabian Nights. Every weekend all over the globe, the SCA puts on similar “themed” jamborees that attempt to preserve the look and feel of pre-17th-century Europe (or anywhere on Earth during that time period). The exclusion of modern luxuries is, of course, selective. Not everything has to be historically accurate, but a reasonable attempt is put forth to maintain the atmosphere. This usually involves basic gestures like wearing period-based garments or parking your car far from the “Enchanted Ground.”

From Friday evening to Sunday morning, the lords and ladies of the SCA (or SCAdians) live in this secluded world, partaking in archery tournaments, artisan crafts, merrymaking, medieval music and of course, hand-to-hand combat. For some SCAdians, the allure of the SCA is the traditional atmosphere and the sense of community; for others, it’s the fighting. Just like in medieval times, the main event of any festival is the violence. The SCA prides itself in accurate, period-based fighting, and here at Arabian Nights, combat is the big show.

“Lords and ladies of the realm,” shouts the herald, “The heavy fighting is about to commence.” As the hot desert sun sinks behind the buttes, the fighters suit up in their armor. Emerging from various tents are sword-wielding Vikings, Turks, samurais and Scots (to name just a few). Everyone leaves other activities and gather to watch the fighters as they assemble in an open area outside the village. The clashing of swords is what the SCA was founded on; it’s what these guys train for.

Back in Salt Lake City, the SCA holds fighting practice every Wednesday evening in Sugar House Park. Here, fighters prepare for weekend battles, swap stories and essentially retreat from the real world for a few hours. To be clear, they don’t use real swords; most weapons are made from rattan (a bamboo-like wood). To help introduce me to medieval fighting, I met up with Mark Andrews, the Knight Marshall (or safety officer).

“Did you bring a cup?” Andrews asked.

“What? No. No one told me to bring a cup,” I said, slightly puzzled and scared.

“Hmm. No one told you to bring a cup? Well, you’re going to have to wear the cup of shame.” He reached into his duffle bag and produced a well-worn sports cup that looked as if it was a hand-me-down from the ’84 Colts. 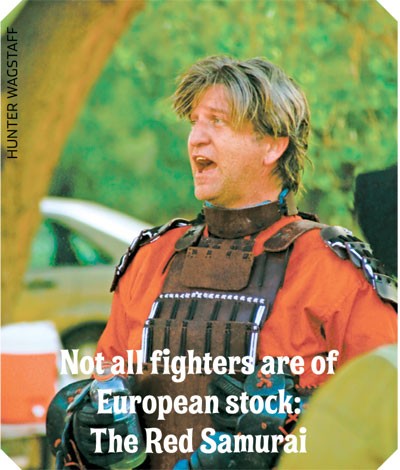 With Andrews’ help, I managed to put on the 50-pound set of armor, and I reluctantly slipped the cup of shame over my pants. Not gonna lie—the combination of leather, steel and a codpiece made me feel like some sort of S&M warrior. As he helped me buckle up the suit, I started to wonder what kind of carnage I was getting myself into. “So Mark, uh, do you think you could just hit me with your sword real quick? You know, so I know how bad it’s gonna hurt?”

He smiled. “Sure.” A couple of nearby fighters turned and laughed.

I lifted my arms and squinted my eyes, and without hesitation, he swung a half-strength blow and smacked me dead in the ribs. I immediately dropped to one knee. “Oh, goddamn it!”

“You all right?” Andrews asked.

“Yeah, shit. Gaaah daah. I’m fine. Totally fine.” I imagine the pain is similar to getting shot with a paintball-gun firing squad. I realized at that point that I didn’t want to play swords anymore.

We stepped out into the field to begin our practice fight. Scattered throughout the grass were small groups of men and women in full armor, beating and clobbering one another. Like a scared little puppy, I stood there while Andrews gave me some pointers. “OK, go ahead and stagger your feet and lift your sword up above your head,” he instructed. We circled each other for a few seconds. “OK, go ahead and swing at me.” I felt like I had no chance in hell of landing a single blow on this guy. Every time I swung, Andrews blocked it. “This is pointless,” I thought. “I might as well be fighting with a pool noodle.”

The next five minutes were an homage to the film Cable Guy: I was Matthew Broderick, and Andrews was Jim Carrey. Crank the Star Trek battle music. Ding! Andrews smacked his sword against my helmet. “What the hell?” I cried out. I had no idea where his sword was coming from because the visibility from my helmet was awful. I blindly swung at Andrews; he deflected it and landed another swift smack to my head.

If this were a “real” SCA fight, I would’ve been dead. Fighting is based on the honor system. If your opponent hits you in a vital organ or a “kill zone,” then it’s over. However, if you get hit in your leg, for example, you have to drop to one knee and fight from the ground. Andrews gave my legs and torso a medieval tenderizing while I staggered around like one of those inflatable, arm-flailing tube men.

I was a sore mess afterward, but I didn’t really care. I most definitely got my ass kicked, but there’s something rewarding about the experience that’s hard to place. Within the SCA, there’s a common phrase: “We want to kill our friends, not hurt them.” I discovered that evening that these fighters love inflicting pain as much as receiving it. I was more than grateful that I had on that cup of shame.