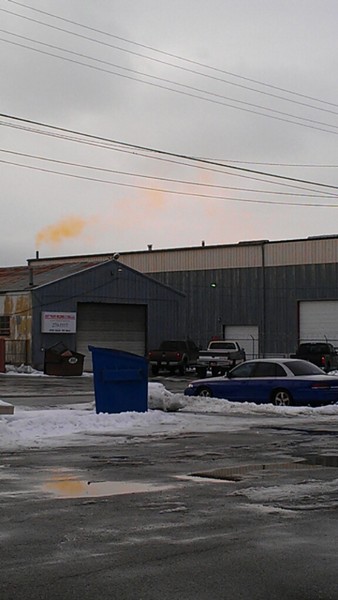 An orange plume of smoke rose from the gray metal building that houses Accurate Recycling, lacing the freezing January air with the smell of rotten eggs.

Paul Manwaring, a concrete mantel builder, says the stench made the air “absolutely, completely, unbreathable.” He stepped outside of his shop to jot down his neighbor’s address so he could file a complaint.

But the fumes, he says, “knocked me back into my shop.”

Manwaring doesn’t recollect who he called, or how long it took for the authorities to arrive. But arrive they did. Murray City Police, the fire marshal, and health-department officers and inspectors from the state’s divisions of Air Quality and Solid & Hazardous Waste all came to take a look at what was happening inside Accurate Recycling.

What they found was a potentially hazardous situation combined with outsize business ambitions. Accurate’s owner, Christopher Leo, had been granted a conditional-use permit to operate a shredding and recycling facility, but he eventually expanded his business to include the environmentally sensitive process of bathing scrap metal in nitric acid.

“We did everything right,” said Joe Leo, the owner’s son, on March 6, when a City Weekly reporter visited the warehouse, which, aside from a few pieces of equipment in various stages of dismantle, was largely vacant. “We just didn’t pretty much ask permission.”

The chemical process was a violation of city zoning laws, and Murray forced Accurate to cease the chemical side of the business. But none of the things Accurate wanted to do violated state environmental regulations. Neither the Division of Air Quality nor the Division of Solid & Hazardous waste cited Accurate. From an air-quality standpoint, state inspectors say, Leo was in the clear.

Still, Leo’s neighbors say that what Accurate was pumping into the air gave them headaches and made them sick.

“It was pretty nasty sulfur-type smell that made you feel pretty shitty, basically,” said Larry Mick, who makes cabinets near Accurate. “My son got sick.”

Manwaring says he’s most disconcerted by the fact that a company could set up shop, buy a bunch of toxic chemicals and initiate a process that could be potentially harmful to the community and not get a single citation.

“I’m stunned that there’s been no citations,” he says. “I’m absolutely stunned.”

Christopher Leo, a New Jersey native, moved Accurate Recycling from his garage on the East Coast to Murray in 2012. Utah’s business-friendly environment and the proximity to his largest scrap-metal provider made it a no-brainer, he says, to settle in the Beehive State.

But after he was unable to pin down a partnership with a business to do the chemical work, says Leo, who spoke to City Weekly by phone from New Jersey, he decided to implement his own chemical process.

Leo says he figured that as long as he cleaned what was being puffed into the air, didn’t dump anything down the drain and captured all of his waste products to be shipped away for proper disposal, he’d be fine to proceed. So he bought nitric acid, hired a consultant to help him build and operate an emissions scrubber, and obtained steel vats to bathe the metal in acid.

But toward the end of this process, with around $2 million sunk into his business, Leo says, his scientist took another job, leaving him to operate the complex chemical process.

“So what I did was just start running it,” Leo says. “On the fourth day that I ran it, the police department and fire marshal walked in because it smelled like chemicals.”

Tom Parry, an inspector with the division of Solid & Hazardous Waste, noted a number of problems with Accurate’s process. He issued Accurate Recycling a warning letter, saying that the hazardous waste must be labeled, stored and disposed of appropriately, and that contingency and safety plans, as well as employee training, needed to be put in place.

“From a hazardous-waste-management perspective, he got the cart a little bit in front of the horse,” Parry says, noting, “I think he could have operated his business in compliance with our rules.”

The city of Murray, though, was less impressed. Tim Tingey, director of administrative and development services, says nowhere in the city are chemical operations of this type allowed, and it is clearly not covered under Accurate’s conditional-use permit.

Murray Fire Marshal Phil Roberts says the last of the chemicals were moved off the site on March 5 to be disposed of.

Tingey says that Leo could have sought a zoning-ordinance change, which would have altered what was allowed in the city. Such a change would have required votes from the planning commission and city council and, without any guarantees, could take months.
Leo, though, believes that his

conditional-use permit covered recycling that uses chemicals, and says the city’s reasons for disallowing a chemical recycling process are rooted in stereotypes. Chiefly, he believes that police officers and city officials suspect him and his sons of being involved in organized crime.

“The police department thinks that we’re some kind of mafia because it’s a family business,” Leo says.
Officer Kenny Bass, a spokesman for the Murray Police Department, says he hasn’t heard that anyone at the police department or city hall believes Leo is part of the mob, but notes that the city’s ordinance officer is reviewing the zoning violation with the city attorney. As of press time, no charges have been filed.

The whole situation has left a bad taste in Leo’s mouth. He says he thought about fighting the city, but that it would be too costly. So he’s pulling out of Murray with hopes of finding a more welcoming community in New Jersey.

Leo says he operated Accurate Recycling “after hours” out of courtesy to his neighbors, though Manwaring says he felt the timing of the orange smoke’s appearance—only after 6 p.m. and on weekends—was to cover it up.

But Leo says it’s simpler than that: He didn’t like the smell, either. “It’s not that I was concerned I was doing anything wrong. It’s not the most pleasant smelling thing in the world, but it’s not illegal. It’s part of the process.”