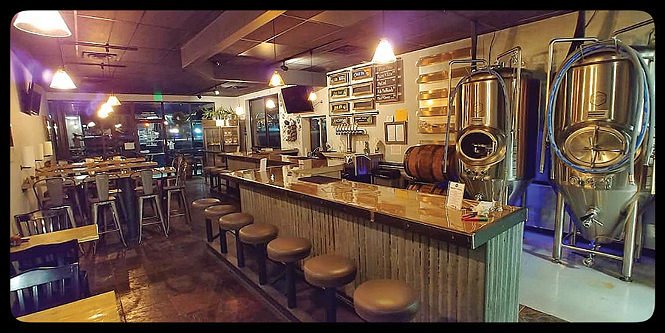 A few weeks ago, in City Weekly's Beer Issue, I had the pleasure to introduce you to Utah's newest brewhouse: Strap Tank in Lehi. Amazingly, Strap Tank's reign as the new kids on the block is already over, as the new newness in Utah brewing takes its place on the beer stage. Heber Valley Brewing Co. launched in August in a low profile brewhouse on the northern end of downtown Heber (500 N. Main, hebervalleybrewing.com). The quaint brewpub operates on a small scale, producing beers in 3.5 and 7 barrel batches. Head brewer Clint Jones has a sharp palate, and has hit the floor running with some solid debut beers. Here's a small sample of what you can expect.

Cold Fusion Kolsch: This German-style beer pours a bronze color with a frothy white head. The aroma is a bit floral with yeasty spices and fresh bread notes. You'll find some flowery essence on the front end of the palate with some interesting spices in the middle—maybe cardamom or orange rind. Cracker and bread crust bring it all home, providing the simple toasted notes typical of the style.

W.O.W. Wit: This beer has a hazy, straw-colored appearance with two fingers of white foam dissipating into a quarter-finger of tight, creamy lacing—a really nice-looking beer. The front of the tongue has big cracker-y notes from the yeast, giving way to the coriander and orange peel in the middle. A slight citrus bitterness emerges on the back end, like a ripe grapefruit, with a semi-dry finish, making for a good example of the style.

Lone Pine Pale Ale: It pours hazy chestnut with two fingers of tan-tinged white foam. This beer has a pine nose that is strongly influenced by spruce tips. The bitterness is at a good, firm level, particularly in the flavor, where it adds some big pine with some citrus undertones. A light sweetness vaguely suggesting honey and caramel comes next to round out the bitterness. The finish is leafy and sappy, with definite evergreen notes lingering on the tongue. This has a nice, spicy palate for those who like a little something extra from their pale ales.

Hazy IPA: It pours a hazy golden yellow color with orange highlights; the single finger of foam leaves streaks of white lace down the sides of the glass. The aroma is mostly grapefruit peel, with some floral spices. Once on the tongue, you're met with tropical citrus and papaya notes that primarily emanate from the Citra, Mosaic and El Dorado hop bill. It's very floral and juicy, with a mouthfeel that is soft with minimal bitterness. This beer is a well-done New England style pale ale.

HVBC IPA: For a session style IPA, this is really good. There is a lot more flavor here than some session beers usually have, and the flavor that is present is more pleasant than most. There are notes of grapefruit laced with crisp piney hops. It works well while still remaining extremely drinkable.

Although Heber Valley Brewing debuted with low-point beers, they won't be limited to that in the future. The brewpub currently operates as a tavern (sorry, no kiddos) and also has a package agency (bottle/can shop). Once the brewery has a few miles under it, high-point beers will be making their way into cans or bottles. Jones says the first of the high-point beers will be a Belgian-style Tripel that will be split two ways—as a traditional offering, and a barrel-aged version. Trust me, when those get closer to production, you'll see them here. As always, cheers!