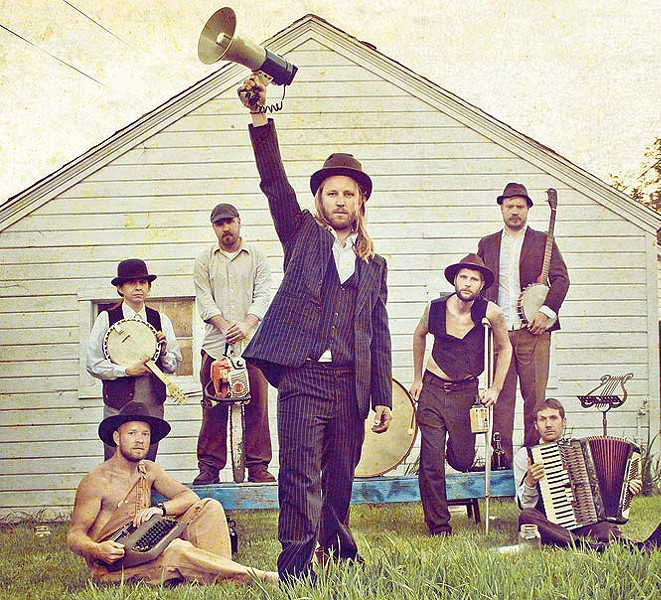 "There's a hole in my coffin/ There's a hole in my bed/ And every time I lay down/ The rain falls on my head." So goes the lament of a coffin-bound corpse—denied eternal rest because of the goddamned water that keeps dripping on him through a hole in the top of the box—in "Hole in My Coffin," on Our Medicine Will Do You In, the new album from Salt Lake City "Wild West gypsy-rock" noisemakers Hectic Hobo. But isn't that just how it goes: You think you've escaped the pain and torment of life, only to be endlessly annoyed by pesky dripping water.

Whether it's a dead person, "a guy that spends his money on booze and race tracks," a couple communicating through letters as the man serves time in prison, or any of the other down & out, sometimes unsavory characters on the album, all the songs on Our Medicine Will Do You In are written from the "perspectives of people dealing with some sort of shittiness or another," says Hectic Hobo multi-instrumentalist, lead vocalist and wanderlust-fueled songwriter Hasen Cone. "I feel like a lot of the song subject comes from providing the point of view of someone that might not have a strong say in our modern culture. We talk about people who kind of exist on the fringes of society."

It's dark, sticky stuff to be singing about for someone whose love for folk music is so strong that he founded a folk & bluegrass club at Utah State University. But even though Cone grew up idolizing Bob Dylan and later became influenced by modern-day folk singers such as Greg Brown and Martin Sexton, the sound he was drawn to when he founded Hectic Hobo about five years ago "wasn't really just straight acoustic folk music," he says. "I'm not really suited to that; I don't have a beautiful voice, and I'm not really good at picking pretty patterns on the guitar."

The significant element of folk music that Cone did decide to keep, however, was the storytelling aspect. Combining his ability "to write stories about strange people" with his "chaotic energy," so was formed Hectic Hobo. The name itself is a description of the band's unique style, with the word "hobo" referring to an "old-time, vagabond, Woody Guthrie songwriting style," and the word "hectic" to a sound that's "more rocked-out and slightly spazzy," he says.

For Hectic Hobo's first two albums—2010's Preachers, Paupers & Pimps and 2012's We Lost Our Legs in the War, We Just Can't Remember Which War—the band's DIY living-room recording method was imperfect but worked, even though they didn't have much experience with the process. The releases "were fun efforts; I always really liked the rawness of them," Cone says.

But Our Medicine Will Do You In "is our first one that we haven't done on our own," says drummer Todd Johnson, the only remaining member of the original band lineup besides Cone. Through near-constant gigging, the band raised the funds to pay for studio time at local recording studio Man Vs. Music, owned by Mike Sasich, resulting in the tightest Hectic Hobo release yet.

Also featuring Nicholas Newberry (accordion, vocals), Eric Peatross (piano, organ, vocals), Sam Osimitz (fiddle, saw, vocals) and Marcus Stevens (bass, vocals), Our Medicine Will Do You In burns like a bracing but gut-rotting whiskey. As for the "medicine" Hectic Hobo is dishing out on the album, "I think of it as poison, but a poison that's good for you, which I think a lot of things are in our lives—or at least we view them that way," Cone says. But if the colorful characters in the songs are any indicator, sometimes a little vice is necessary to survive.

And while those vices often warrant more than a few raised eyebrows—take the roofie-slinging charmer in "Good Ann, Rise and Shine" and the tryst-happy mayor in "Scarecrow Jones," for example—they're just trying to "heal the pain," as Cone sings in "Hole in My Coffin." And Hectic Hobo doesn't judge, only tells the characters' tales—no matter how lurid.

Our Medicine Will Do You In is "just showing that these people exist and it's a strange person with a unique perspective," Cone says. "And it's more like showing that nobody's normal and everyone has their thing."