Rian Johnson turns Knives Out into a uniquely entertaining spin on murder mystery. 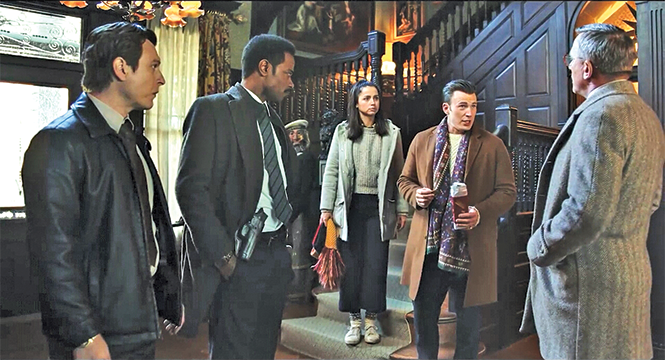 It's hard to explore just how effectively Rian Johnson upends the idea of a whodunit in Knives Out without spoiling whodunit. Or maybe who didn't do it. And there's not a chance in hell that I'm going to ruin that delightful sense of discovery.

Because Knives Out somehow walks the tightrope between being a mystery, being about what happens when you think you know when the mystery has been solved, and being about the assumptions people make in any given situation about who is likely to have done it. It's funny and frisky and more than a little bit pissed off, and it all makes for a bracing cocktail of genre entertainment and lacerating social commentary. If the "anti-Social Justice Warrior" crowd was pissed off at Johnson for the choices he made in The Last Jedi, this is only one more way to say "Fuck 'em," the way he literally did in a recent interview.

Like any mystery worth its salt, this one begins with a suspicious death: Best-selling mystery writer Harlan Thrombey (Christopher Plummer), on the morning after his 85th birthday party, is found with his throat slit. The initial investigation seems to indicate a suicide, but there are plenty of suspects among the family members who were present for the party: his daughter, Linda (Jamie Lee Curtis), and Linda's husband, Richard (Don Johnson); his son, Walt (Michael Shannon); his daughter-in-law, Joni (Toni Collette); and Richard and Linda's black-sheep son, Ransom (Chris Evans). Even Harlan's nurse, Marta (Ana de Armas), might have had both motive and opportunity. And celebrated private detective Benoit Blanc (Daniel Craig), hired anonymously to look into possible foul play, is determined to get to the bottom of it all.

It should be no surprise that Johnson—the writer-director behind Brick and Looper—has some tricks up his sleeve when it comes to approaching genre conventions, and he makes his intentions clear fairly early on. Within the first hour, we see an account that might suggest exactly what the real circumstances of Harlan's death were, shifting the dynamic away from "whodunit" to "now what." Johnson keeps dropping clues, but mostly throws us into the world of someone convinced that the shadow of suspicion is about to drop on them, and what they can do to keep a step ahead of Blanc's investigations.

That's what makes Johnson's gifts as a filmmaker a perfect match for his gifts as a writer. He directs with an eye to ratcheting up the tension on our prime suspect, while still offering plenty of superficial pleasures. The Thrombey estate itself—aptly described by one character as suggesting that the author "lives in a Clue board"—becomes a wonderful setting full of secret doors and significantly creaky stairs, while Johnson sets himself to lending visual panache to moments like Blanc sitting in the shadows, only a puff of his cigarette smoke emerging from the blackness. It's rare to find movies that are as much fun to look at as they are to listen to, and Knives Out is simply the kind of movie that can leave you giggling with pleasure at everything that's emerging.

Which isn't to say that Johnson doesn't also have a few serious things on his mind. Knives Out pointedly makes the Thrombey family into a bunch of people who are all convinced that they're "self-made" business successes, despite every one of them benefitting from being part of this already-wealthy family. Knives Out makes no bones about its desire to take a blowtorch to the notion of anyone "deserving" inherited wealth, and while he's not always subtle about the politics he's injecting—one family conversation underlines ideas fairly obviously—it's fascinating to consider a mystery in which the motive of getting money you had no part in earning really shouldn't even exist.

Inevitably, we find our way toward a resolution in which puzzle pieces are put together and key facts are brought to light. Dumping all that exposition isn't easy, but Johnson serves it up about as smoothly, humorously and satisfyingly as one might reasonably hope for. There are a few things he clearly wants to stick the knife in with Knives Out. How hedunit is something you should discover on your own.