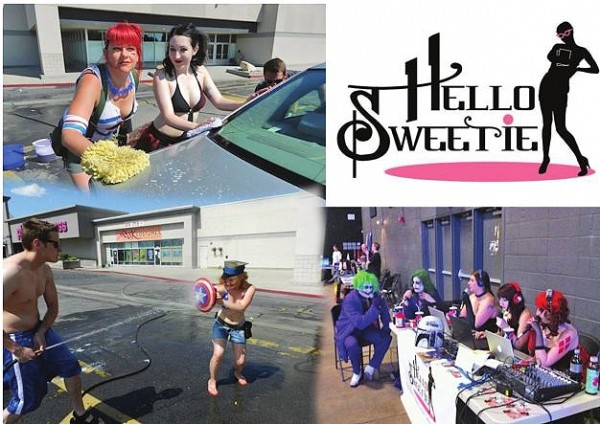 It’s been a year since four geeky gals with a love for Firefly, Doctor Who and Harry Potter gathered in an apartment and started up the Hello, Sweetie! podcast. Since then, the show has gained local nerd notoriety, contributed time to charities and expanded to five participants after lineup changes. Now, as the show celebrates its one-year anniversary—an achievement many podcasts never reach—two of the show’s founding femme fatales, Cherri Mack and Danielle Ãœber Alles, reflect on their first year, talking with City Weekly about their anniversary, being an all-women show and their fellow geeks in podcasting.

Your show recently passed the one-year marker. How is it to reach that point?

Cherri Mack: I am very proud of us for making it one year. On one side, it feels like we are still a very young show and still trying to perfect our format and our process. On the other side, it feels nice when you get recognized from time to time and you can see your show gaining popularity and listenership. It’s a great feeling to have our first year under our belt!

How is it for you as a group to be able to break the “geek-girl” stereotypes?

CM: We have had discussions on the show about “geek-girl” stereotypes or the “fake geek girl” phenomenon. We honestly feel like there are different levels of geek. Whether you have 14 titles in your comic book hold like I do; have a reading list a mile long like Kristal [Starr]; have an in-depth knowledge of video games like Danielle; are a TV enthusiast like Rebecca [Frost]; or if you have only ever played Pac Man, or just really like the X-Men movies, or maybe you think ’80s cartoons are awesome … you should embrace your geek and feel free to discuss at whatever length you can.


I think the deeper issue is the geek community as a whole criticizing someone for having a limited knowledge about things that are considered popular “geek culture.” So what if I haven’t seen much Star Trek, or you don’t know what D&D is? As geeks, we have always been outsiders, so making someone feel unwelcome in the community is counter-intuitive to what the community came from in the first place.

That being said, it’s always nice when I can impress someone with my Doctor Who or Star Wars knowledge. I mean ... that’s a part of geek culture too. Being able to say “Yeah ... I totally know that.”

Utah already had prominent shows like Geek Show, RyTime and Wednesday Warriors. What was it like breaking into the podcast scene and essentially competing against fellow geeks for a local audience?

Danielle Alles: We love the Geek Show guys and RyTime! It doesn’t feel like much of a competition, because the geek community is so supportive and we also offer something those podcasts don’t: a female perspective.

CM: I have never really thought about us being in competition with the other geek podcasts in the state. Being a part of such a close-knit community, members of Dungeon Crawlers, RyTime, GeekShow, Wednesday Warriors ... they are really just our friends. Podcasting is such a great medium for your individual creativity, so you can really set yourself apart and find something unique to market. We do try to stay away from stuff that we know that other podcasts do.

What made you start taking the show on the road more for events and charities?

DA: We enjoy showing off, dressing up and looking pretty, so why not do it for a great cause?


CM: Really, our first foray into live recording happened at the SLC Nerd [convention]. We recorded live, and really had a great time. The opportunity to cosplay as well as do our show live really appealed to us, not to mention all of the amazing people we got to talk to on the show. The charity aspect came from hanging out with great costuming groups like the Alpine Garrison of the 501st Legion, the Krayt Clan of the Mandalorian Mercs, Rogue Base of the Rebel Legion, and H.E.R.O.I.C. Inc, who use costuming to raise money and awareness for great causes. Mixing cosplay and charity work isn’t a new idea by any means, but it’s something that we have really fallen in love with and want to continue to do into the future.

What plans do you have in mind for the show going into your second year?

CM: This year we will be attending Anime Banzai and doing a live recording there. We also plan to do more charity events, possibly work with the “Can’t Stop the Serenity” event at Brewvies, and continue to attend as many events as possible.