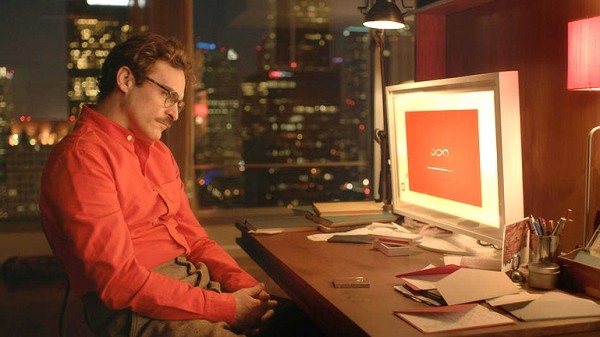 Theodore Twombly (Joaquin Phoenix)—the protagonist of Spike Jonze’s gorgeous science-fiction romance Her—is a sensitive guy. You can see it in the way he does his job as a 21st-century Cyrano, surrogate-writing romantic letters rich with detail that his employer—BeautifulHandwrittenLetters.com—provides for clients. It’s there in the way he observes and reads the expressions of the people he sees, and hears subtle emotional inflection in voices. And it’s there in the way he’s still mourning the end of his marriage a year after the split, instructing his mobile device to “play melancholy song” at the end of a workday.

In any other variation on this basic arc of “man changed by a romantic relationship,” you’d probably find Theodore to be much more of a typical, emotionally shallow “guy.” In no other variation would you likely find that the relationship is with an artificially intelligent computer operating system.

The high-concept premise for Her is its key marketing hook, and certainly it taps into something zeitgeist-y about The Way We Are Now. When Theodore begins his relationship with Samantha (voiced by Scarlett Johansson)—his state-of-the-art new operating system with an evolving personality—it certainly feels like a reductio ad absurdam exploration of how so many human connections have become exclusively digital, and how real they seem even without another living human sitting in the same room. When Jonze shows us the near-future Los Angeles in which Theodore lives—full of people walking in isolation, plugged in and interacting exclusively with their electronic hand-held universe—it feels pretty similar to the world in which we already live.

But Her isn’t simply a fable about living virtually, virtually all the time. Certainly Jonze nails some brutally funny moments about lives spent with digital connections, from Theodore’s awkwardly failed late-night sex-chat to the foul-mouthed video-game character with whom he interacts. And Theodore’s job offers a sharp swipe at people who have lost the ability—or willingness—to communicate in their own voice even with those who are supposed to be closest to them.

Her is even more potent, however, at exploring a complexity in relationships that often seems hard to manage. Because, as sweet and sensitive as Theodore might seem to be, he’s also got a shallow side, as his ex-wife (Rooney Mara) suggests when they meet to finalize their divorce. While it’s a great joke when we hear him deleting serious news alerts only to stop for provocative photos of a pregnant celebrity, it’s also a chance to recognize that he’s not a guy who spends his time dealing with unpleasant realities; he may be a romantic, but that’s not the same as knowing how to be in love.

That’s the soul of the relationship dynamic between Theodore and Samantha, magnificently captured in both performances. Johansson’s voice manages to evoke the perky, quirky personality that initially makes Samantha so appealing, as well as the anxiety and uncertainty of an entity only beginning to understand its own capacity to feel and think. And Phoenix makes Theodore endearing while never hiding his genuine insecurity—he gets a terrific moment reacting to a co-worker who accepts the relationship with Samantha that Theodore had begun to consider embarrassing—and his struggle dealing with the thorny, messy side of being with a real woman.

The genius of Her, then, is that its gimmick isn’t merely a gimmick. It’s a perfect set-up for exploring, in the condensed time frame of a movie narrative, the evolution that complicates love. Samantha’s growing self-awareness is like watching Moore’s Law about the exponential growth of computing capacity play out as the life cycle of a romantic relationship, faced by a man for whom beautiful words and sensitive feelings are only abstract concepts. It may not be a jaw-dropping, revelatory central idea that some guys have growing up to do when it comes to dealing with women, but Jonze manages to concoct the perfect cocktail of grace notes and edgy, challenging character study. Her finds its brilliance not simply in suggesting we need to get offline and deal with real people, but in recognizing that even when we’re with real people, we may still need to get a hell of a lot better at dealing with them.