He's Got a Feeling 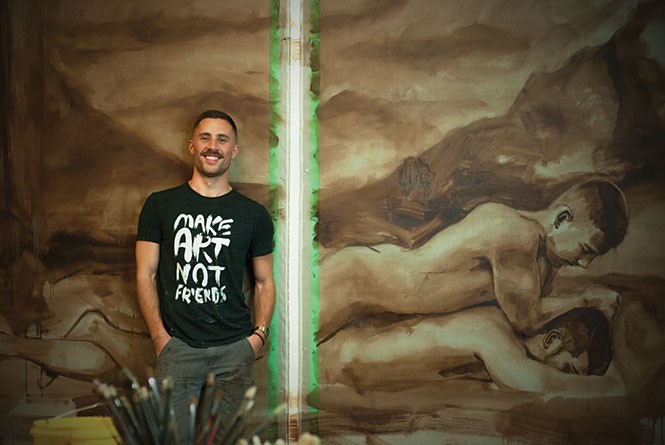 Duality strikes a chord with 28-year-old artist Andrew Moncrief. Be it blurring the lines between what's typically hard or delicate, masculine and dandyism, brooding sexuality and underlying homoeroticsm. Known for his large-scale figurative paintings, the Montreal-based artist presents A Strange Feeling, his wrestling-tinged exhibition, which opens this Friday at the Utah Museum of Contemporary Art.

The genesis of the exhibit came last year, when Moncrief found himself living in Salt Lake City. He'd returned briefly to Canada for his third solo exhibition and wandered into the Montreal Museum of Fine Arts where he was captivated by "The Still," a piece by his former teacher, Marion Wagschal.

"It's this painting of this old man on his bed on his back, and these two kids wrestling sort of in the foreground of the painting," Moncrief recalls. "One of them is in a headlock, and there was something super weird and violent—and also really weirdly intimate—about the whole situation. It hit me."

He remembers staring at the painting for 45 minutes. "I wasn't really sure exactly what it meant for me; there was just something really captivating about it."

Taken by the painting, he felt a switch went off in his head. He was struck by the dichotomy between violence and intimacy. "It was the catalyst for something. I started looking at images of wrestlers, and it evolved naturally," he says.

The attraction was foreign. He calls his newfound infatuation "totally the opposite of who I was growing up. I was fairly quiet; I hid in the art room in high school. I was a closeted gay kid who was super uncomfortable in his body. I hated gym class in high school. I was completely traumatized by all that," he says.

He now sees wrestling as an ideal vehicle to convey his own diffidence. "Looking at these works, I was thinking about being a teenager in gym class, and perceiving this thing—the act of wrestling—as something more than benign," he says. "It's not just a platonic act, there are so many more layers to it for me, so that's part of why I wanted to use it as a metaphor, and that's how I became enamored by it."

Moncrief admits to grappling with other issues as well. "Whatever this project catalyzed this summer, is still something I'm very interested in and want to explore more; the male body, the male form, taboo in sports and my insecurities with my own sexuality," he says. "I mean, I'm a pretty secure person, but I still have my insecurities. I guess it kind of plays on that."

Seven paintings compose A Strange Feeling. Thick oil strokes in blues, grays and pinks invite viewers into a world marked by grueling larger-than-life snapshots that attempt to be balanced by titles like "Innocence" and "The Admiration."

"By exploring the limitations of anachronistic ideals, Moncrief's laden portrayals of tangled poses and aggressive movements awaken internalized ideas and attitudes about how we relate to one another as body-selves," museum curator Becca Maksym says.

For previous works, Moncrief, like many emerging artists, was his own model. "I used to photograph myself a lot but that was quite often a pragmatic thing," he says. "When you're an art student, you're quite often investigating and scrutinizing yourself. Also, you can't afford models so you take pictures of yourself."

For A Strange Feeling, he appropriated images of Turkish oil wrestlers he found online. "I found that sport to be really interesting," he says. "It's the longest-running sanctioned sport in history. It's been running for, like, 758 years, and it's a highly respected sport." The fact the mostly Muslim country delights in something that "looks so homoerotic when you watch it" presented yet another divide for the artist. "It's kind of baffling to me," he says.

Moncrief doesn't necessarily expect viewers to experience the same aesthetic arrest he felt when looking at his old teacher's piece. "I feel that as an artist, my job is to create the work. I never have an idea of what exactly is going to happen."

He pauses, "I hope that I have enough skill under my belt to engender in people a certain reaction, but I don't think I can ever say, 'I want to do this' specifically because, no matter what, people bring their own subjective perspective to my work."