Written off by the DEA, spice is making a resurgence among Salt Lake City's marginalized communities. 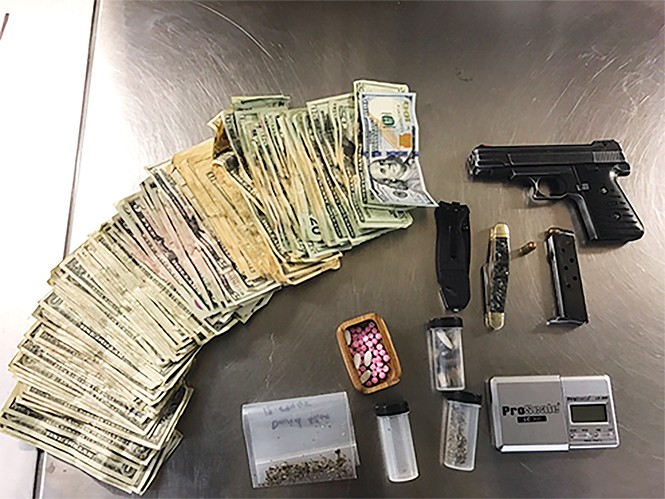 On April 3, 2017, a woman and her 14-year-old son were selling spice near the downtown homeless shelter. Salt Lake City police officers watched her give money to her son—who put it in a bag—then shake out some loose spice into a buyer's hand. Neither the woman nor her son lived at the shelter. After she was arrested, police found she had 7 grams of spice, a synthetic cannabinoid that mimics the effects of THC, along with five empty spice bottles. But it was the handgun in her purse that gave them pause.

Spice is a chemical sprayed on plant-based material—anything from dried grass clippings to potpourri—that is dried and then sold loose-leaf to be rolled into cigarettes or used in an herbal tea.

When spice first hit Salt Lake City in the late 2000s, it gave a mild high similar to marijuana. But in recent years it has become a highly unpredictable, psychosis-inducing, addictive substance. However, the lack of significant cartel involvement in manufacturing and distribution has meant, "It's flown under the radar to a large degree," according to SLCPD Det. Greg Wilking. "It's got a foothold here. I don't see it going away. It's cheap, it's available and it's a horrible substance."

The toxicity of recent spice versions is forcing small-time, freelance dealers—who typically target homeless—to carry weapons for self-protection. "It's scary," Wilking says. "They're arming themselves because people are becoming physically addicted to this substance." The mother-and-son bust, however, is just the latest development in a long-running saga that has emerged as a public health issue for marginalized communities, the state and nonprofit agencies trying to address their needs.

Sean Erickson is the director of behavioral health at the homeless-focused Fourth Street Clinic. He says the substance "impacts certain communities—the poor, the homeless—because of how cheap it is, and sometimes the youth because it's novel, fairly accessible and inexpensive." Homeless spice users, advocates say, are simply trying to survive on the street and dull their pain by using drugs or self-medicating, and at $1 or $2 a joint, it's the cheapest way at "the block" to escape.

While the Salt Lake City Drug Enforcement Agency office did not respond to several calls for comment, national DEA spokesman Melvin Patterson notes that after the Chinese agreed in October 2015 to clamp down on the distribution of 116 chemical substances that could be shipped to the U.S. to make synthetic drugs, problems with spice "waned" significantly.

That, however, has not been the case in Salt Lake City, where interviews with medical personnel, law enforcement and service providers to the homeless community reveal continued problems with an ever-changing substance. Citing one patient's experience, former Fourth Street Clinic Behavioral Health Director Sam Vincent says the man "would just take dried oregano, spray oven cleaner and ant killer over the leaves, dry it up and sell it as spice. It is much more of a danger to [the homeless] community than it is given credit for." But, he continues, as his patient's story reflected, cracking down on such homespun manufacturing is challenging at best.

The psychosis it can induce, whether through use or withdrawal, means first responders who deal with users identify their behavior as a mental health issue and take them to the hospital. Volunteers of America's veteran medical outreach worker Ed Snoddy says spice users who become psychotic create "a roadblock in care because there's somebody that is so wigged out, sometimes they are brought up [to the University of Utah Neuropsychiatric Institute] by the police, by EMS and there's no place to put people. We don't have immediate beds for substance abuse, we don't have any respite beds in the community." That said, if the spice use masks underlying mental health issues, it still requires that patients come off the drug before they can be evaluated and treated.

Snoddy recalls one strain two years ago called Hot Red "that threw a lot of people into psychosis. People were being four-pointed—restrained at their arms and legs." Clients with mental illness who smoked spice were sometimes "put right over the edge. It baffles me, but there's an addiction to it."

One longtime user who listed his name as "Trace," after failing to meet a reporter several times to discuss his addiction, instead wrote a history of his relationship with spice on several sheets of paper with a pencil. He wrote that once it was made illegal in Utah, out-of-state and local manufacturers added all sorts of ingredients to the raw plant material. He continued that with no regulation of spice, while it remained cheap, its impact was disturbingly unpredictable. "One toke will keep you high for about 30 minutes," he wrote. "The negative is that 1 out of 5 joints will cause me to go into a severe panic attack and a [psychedelic]-like episode where I can't control my movements or thoughts. It's terrifying! I believe I will die—that I've entered a demonic state and I can't escape it. This after one toke."

United States government website drugabuse.gov notes that synthetic cannabinoids "act on the small brain cell receptors," like THC does in marijuana. But although there has been very little investigation, researchers believe that the synthetic drugs "bind more strongly" than weed to the receptors, creating both powerful highs but also symptoms of psychosis. While the website claims there has been "a rising number of deaths" related to spice use, City Weekly was unable to identify anyone who has died locally from using spice.

It's not only the homeless who have been threatened. At the beginning of 2017, Wilking says, West High and Northwest Middle School both saw spikes in student spice usage. It was only after SLCPD busted a convenience store nearby that spice use declined at the schools. "There's a secret underworld of selling," Wiking says. If you go into certain smoke shops or convenience stores and your driver's license has a sticker on the back, that "verifies you're a good customer"; and can result in an under-the-counter sale. A secret name or handshake can also lead to sales.

VOA's chief operating officer and clinician Audrey Rice writes in an email that treating spice addiction is a challenge because it results in psychosis, which "essentially means a client cannot participate in treatment due to delusions, paranoia, etc." Because the formula for spice and its ingredients are constantly changing, "it's very difficult to test urine for synthetic cannabinoids or 'spice.'"

The Road Home's executive director Matt Minkevitch says insight into spice "seems elusive at this point," even while its usage is widespread in the community his shelter serves. He hopes that agencies and those in the private sector will have "a frank conversation about what we can do to address this in the most humane manner possible. Let's wrap our minds around this and know what we are dealing with."

Wilking sees spice becoming only a more urgent issue for law enforcement, health services and agencies working with the homeless. One month after the mother and son were arrested with spice and a handgun, an 18-year-old with a backpack was detained after walking in the street near the shelter and then trying to flee. Cops found 72.4 grams of spice in more than a dozen canisters—and a loaded handgun.