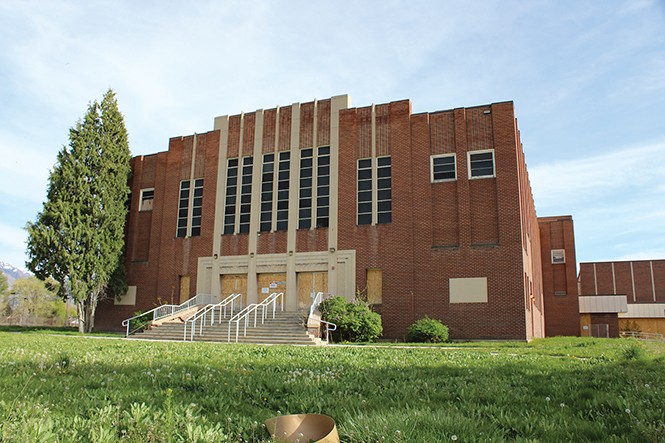 The Granite High School buildings could be added to a national historic registry then reduced to a pile of rubble months later.

The Utah State Historic Preservation Review Board unanimously agreed on April 20 to recommend that the former Granite High—near 3300 S. 500 East—and several satellite buildings be recognized on the Historic Registry of National Places.

The recommendation will be forwarded to the U.S. Department of the Interior, which will determine in the next couple months whether it agrees with the suggested designation.

But developers are in the midst of acquiring from the Granite School District the 27-acre property where it's expected they will build homes and a supercenter store. A spokesperson for the district confirmed that asbestos abatement is slated to begin within a month and demolition around August.

A historic registry designation does not protect a building from demolition, as was emphasized by members of the preservation board. Before votes were cast, Granite High School alumni lined the boardroom walls as a show of support.

"People believe that once something is on a historical registry, it should not be torn down. I really hope there's some sort of collective action that comes forward and really expresses their power. Right now, I believe, most alumni and people in the area feel like they don't have real power," Carter, a class of '97 Granite High grad, says.

With the designation comes a 40 percent tax credit for renovation, she adds.

The district, however, has no desire to slow down the deal.

Matthew Anderson, who represented the district, stood at last week's meeting and asked the board to forward on a request to deny a historic registry designation.

The buildings, he explained, are plagued with asbestos and other hazardous material and had suffered deterioration over the years. Compounding the liability problems, the boarded-up buildings have attracted mischief, criminality and danger, he claimed.

"Inside the former high school, on the roof and throughout the campus there has been thefts, illicit activities and even an attempted suicide," he said, then added, "This is an untenable situation for the district to maintain this building and it's untenable to the community."

As a final point, Anderson noted that South Salt Lake residents had twice rejected bonds to buy and preserve the buildings, when the district was trying to figure out what to do with the structures that shuttered in 2009.

"During that time, only a few parties have expressed interest in acquiring the building, but none of them has provided a viable offer to purchase this property," he said. "Those who are seeking to save the building have no practical plan to do so."

It's a characterization that the Utah Arts Alliance disputes. Earlier this year, the Utah Arts Alliance made an ambitious offer: $5.3 million for a little more than 10 acres of property at Granite High School. If acquired, the group would move forward with a plan to preserve and repurpose several campus buildings to be used as "makerspace" areas where artists could work on innovative projects.

When the alliance's offer to buy one developer out of its contract with Granite School District was met in February with a counter of $6.5 million, they saw it as the first foothold to reaching their goal.

"There was a glimmer of hope because at least we had a number, and they were at least interested in letting us try," the alliance's Executive Director Derek Dyer says. The group announced the news and began working on a funding plan.

But three weeks later, the developer rescinded the offer. Dyer and his team went back to the drawing board and for the last year, the alliance has explored all conceivable avenues in a quest to save the school.

Development on the school grounds is split into four phases. The first three concern the southern portion of the Granite property, where more than 70 single-family homes will be built by Garbett Homes. Wasatch Group plans commercial development on the northern side for the final phase.

Early on, the alliance recognized that in order to be successful, it would have to forge partnerships instead of erect roadblocks, so the group aimed to find middle-ground with the developers.

"We were trying to create a win-win-win situation, where we're still saving some of the historical buildings. We're still providing some community good by creating art facilities, and they could still do a development," Dyer says.

But when the deal with the developer broke down, the group was left with little recourse than to hope that a historic designation shifts pressure onto the district and the developers to rehabilitate the structures.

The alliance is critical of the district's line of thought that it's in the best interest of taxpayers to sell off the land to developers who plan to raze the buildings. Dyers and Carter say the $11.5 million deal is undercut by demolition costs, which the district will bear.

"The cost is high for demolition, mostly because of the amount of asbestos mitigation required due to extensive damage and vandalism that has occurred and because of the age of the building," he writes in an email.

Horsley says that in previous school demolitions, contractors have allowed interested individuals to take home bricks as a memento. He anticipates the same to happen with Granite.

It would be a consolation for the group of residents who want to see the edifices—some more than 100 years old—standing for another 100. Carter acknowledged that an 11th-hour pitch for a historic designation is a longshot, but one was worth pursuing and could pay off. "We're doing our best," she says.

Alumni who attended the vote applauded Carter as she exited the boardroom and thanked her for her persistence. As one man left, he boiled down the neighborhood's concern in a simple plea to the board: "Just don't let them build a Walmart there."