If 4% beers are soon to vanish, grab a couple of the best examples. 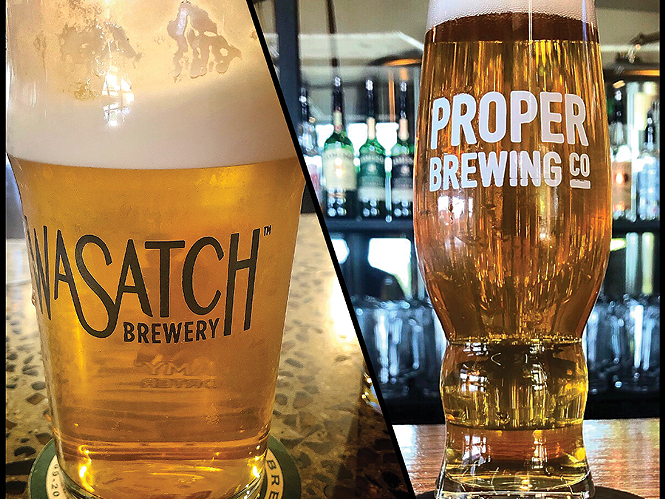 Since 4% beers are likely going the way of the Yugo (thanks to the Legislature's bill that raised percentages), I thought it might be nice to highlight some of the better examples of what's floating around out there. Here are a couple of low-points you should try.

Wasatch Brewery Snap Down Nitro IPL: This India Pale Lager opens with a light copper, goldenrod body. The typical streams of rising carbonation are replaced with a falling cascade of nitrogen bubbles. It builds a thick, frothy, cotton-white foam that lasts until the bottom of the glass. Sharp aromas of tangerine and pine stand tall above a tepid malt base; cracker, honey and biscuit dominate the beer's grain character, supporting citrusy, piney hops but without rivaling it. It's mostly grain, but partial malt sweetness carries the taste of toasted Grape Nuts cereal. Light granola-like honey-dipped sweetness gives a boost to the hop flavor that rises in the middle. The sharpness of tangerine and bitter orange peels offer a tangy acidity that develops toward a dry malt and resinous pine-like bitter finish.

Its dry mouthfeel is medium-light and racy from the start. The abundance of carbonation ushers in a quick finish with fleeting malt structure and a crisp, plaster-like closure. Light leafy astringency continues to haunt the beer late, even though its dry taste is highly celebrated.

Overall: The absence of CO2 drives down the bitterness in this version of Snap Down. This hoppy nitro lager is a welcome attempt to do what IPAs do best: promote hops while suppressing malts. This IPL is a rather effortless taste, even if the lack of prickly bubbles makes it somewhat hard to wrap your head around.

Proper Brewing Co. It's Always Sunny in SLC: This beer pours a crystal clear shade of copper with an initial two fingers of slightly off-white head that eventually dies down to a finger of soapy froth. The clarity on this beer is one of the best I have seen from Proper. The nose is assertive, with big notes of pine and a nice dose of lemon grass, plus mango in small amounts. It has a nice malt level that should lead to a smooth drink that isn't overly sweet. While not a massive nose, it's clean and promising.

The taste follows the nose completely, with lemongrass and pine melding together in moderate amounts with a touch of mango and just enough of the malt aspects to keep it from getting too sweet. The result is more pleasant than most session beers, which, in my opinion, tend to lack the balance between hops and malts. The feel on this beer is thinner than I expected, with a moderate amount of carbonation. Flavors in the mouth remain the same, with a bit more of the lemon grass. It swallows clean and easily with a low level of bitterness.

Overall: This is not a hugely complex beer by any means, but it is a great example of the style. The balance is as good as you can get for a session, and I could surely pound two or three of these without it getting tiresome. I'd have it again. As always, try it for yourself and come to your own conclusions.

Snap Down Nitro is a draft-only offering, and I managed to find it at the West Side Tavern in Salt Lake City. Breweries don't do growlers or crowlers of nitro beers because of the foaming issues, so you're just gonna have to sit your ass down and have one there. However, you can get Always Sunny in SLC in growlers and crowlers at Proper, which I suggest, because with this heat, you're going to need all the help you can get. As always, cheers!